I had no intention whatsoever of becoming a nurse,” says Matthew Zinder. “I was in the arts, I wanted to be a photographer. I’ll never forget the moment my father brought me into his home office, sat me down, handed me his business card, and said ‘I want to add your name to that card.’ He probably was expecting me to laugh at him, but I thought maybe I should look into it.” 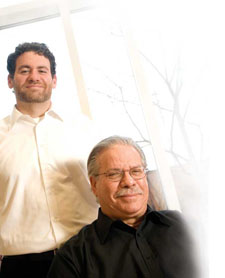 Today, Matthew and his father Herb Zinder are co-owners of Zinder Anesthesia Associates, providing surgery-center anesthesia with a staff of more than 20 nurse and physician anesthetists. They are also the first father-son pair of Hopkins nursing alumni. Their nursing careers, though similar, started nearly 30 years apart.

“Patients would look at me like I was from Pluto,” recalls Herb, who was among the first men to graduate as a Hopkins nurse in 1971. In the hospital, Herb would change in the doctor’s locker room with the other men. In school, he was once asked to leave a class during a film on breast self-examination. “They thought my presence would make the female students uncomfortable.”

When Matthew attended Hopkins in the 1990s, men comprised about 5 percent of the nursing workforce. His only recollection of gender bias in school was when the class was taught to conduct a physical assessment. “They’d only ask the male students to volunteer to be examined-because their shirts could come off,” says Matthew.

Anita and Wendy Shauck also graduated from nursing school about 30 years apart. Both are alumnae of Church Home and Hospital: Anita graduated in 1942 and Wendy in 1975. As a child, when Wendy accompanied her mother to work she was relegated to the patient waiting room. “I always wanted to know what was going on upstairs where the nurses and doctors were,” admits Wendy. “I remember telling my mother I wanted to be a doctor. But in that era, you were a nurse, a receptionist, or a teacher.”

Anita noted her daughter’s interest. The summer of Wendy’s 14th year, when school was out, “I said to Wendy ‘why don’t you come and try it out?’ So she came down to the hospital and she liked it,” says Anita.

“I did what my mother suggested,” says Wendy. “I was a candy striper then a pinkie then a health aide then an LPN then an RN. And that’s how I became a nurse.”

While Anita spent her nursing career working directly with patients-in hospitals, the Navy, and even at an insurance company-her daughter, Wendy, has spent a greater amount of time worrying about paperwork and insurance. “You always keep the patient first, in spite of the tons of paperwork or computer ‘input’ time. Today’s patients see you typing on a laptop and they are curious at first, but the client ultimately prefers the ‘personal interaction’ over technology.” These changes in health care led Wendy to an office job with Medstar Health Visiting Nurse Association participating in quality assurance reviews. This enables her to facilitate an integrated delivery of care to the patients from behind the scenes while also fulfilling payer requirements.

Mother and daughter laugh when comparing their earnings as new nurses. When Anita began nursing in 1942, she earned $1 per hour, the equivalent of $13.23 today. She paid $50 to enter her nursing education program, and another $50 after six months in training. Thirty years later, in 1975, Wendy entered the workforce with a salary of $13,000 per year, which is the equivalent of just over $52,000 in today’s dollars.

Both parents are proud to see their children in successful nursing careers. Across the generations, these nurses share a compassion and desire to work directly with patients and advocate for their best possible care. Says Herb Zinder: “When I went into private practice, I felt like I was building something that might not have a future. I want to see this business grow and support future generations.”