500+ and Still Counting: Recollections of a Rural Midwife

In Mother Theresa’s House, an autobiography detailing her global nursing experience, Rosemary Dew, accel. ’00 writes, “I will serve the poor in my own country, and when I can, I will travel to foreign lands and be a nurse to people no one wants.” Such has been Dew’s aim, and often it has been fulfilled through non-traditional forms of patient care.

Dew’s path to nursing was hardly typical. She first spent more than a decade (1977–1990) as a special agent for the FBI—an eventful period she later described in her 2003 book, No Backup: My Life as a Female FBI Special Agent—and then she moved into work as a defense contractor. It was during this time that she began volunteering at a hospice. While providing comforting measures for the terminally ill, Dew’s desire to care for others was ignited, and she decided to pursue an education in nursing, ultimately enrolling at Johns Hopkins University School of Nursing.

Dew is an advocate of complementary and comprehensive health care, a passion born out of her own experience. After sustaining an injury at the age of 15, she suffered severe chronic pain for more than 30 years. Eventually, she says, she found relief through anticonvulsants and chiropractic therapy. “This experience provided me the empathy to aggressively seek to relieve others’ pain through traditional and creative means,” she says.

Dew believes that spiritual needs strongly influence the physical. Through this lens, she has learned to incorporate dimensions of healing sometimes overlooked in American health care: pain management and relaxation techniques such as “Healing Touch,” a specialized form of energy transfer that is similar to Reiki, and guided imagery, massage, and “old-fashioned handholding.”

In 2004, Dew spent time as a volunteer nurse in Calcutta, India—an indelible experience that became the subject for her latest book.

“Mother Theresa’s House for Sick and Dying Destitutes is a home, not a hospital,” she notes. “The sickest and poorest were brought in from the streets for care and often to live out the last moments of their lives. It was nothing like a Western hospital, but about 60 percent of the patients are healed, mostly through good nutrition and human kindness, similar to care given by a loving family. My competence as a care provider depended largely upon the most basic skills I learned at the Johns Hopkins University School of Nursing. In the absence of charts, monitors, and imagery, I had to rely heavily upon my ability to assess patients with my senses and my nursing school nightmare—calculating IV flows by hand and timing the drips.”

Currently, Dew volunteers as the school nurse at the U.S. Department of Defense Joint Counterintelligence Training Academy, where she is also employed as branch chief. After 9/11, she recalls, “I knew I had to go back to counterintelligence and counterterrorism. I’ve been the volunteer nurse since November of 2002 and take as many seminars as possible to keep up my skills.”

Of her experience, Dew reflects, “My rewards have already been more than I imagined: new friends across the world, memories that bring smiles, and peace that passes understanding.”

500+ and Still Counting: Recollections of a Rural Midwife

“I really wanted to be a nurse—to help people,” says Peggy Kemner ’55. In 1958, just a few years after graduating from the Johns Hopkins Hospital School of Nursing, Kemner and her friend Irma Gall, a teacher, began a lifelong journey helping the community of Stinking Creek, KY. For almost 50 years, the duo has run Lend-A-Hand Center, providing a clinic, midwifery services, Sunday School, day camp, and innovative farming techniques to families living in this rural area.

In the 1950s, Kemner began visiting all 13 one-room schoolhouses in Stinking Creek to provide immunizations for children. Her offerings soon grew to include health movies, height and weight measurement, worm treatments, and more. She always held clinics at the Lend-A-Hand Center, but most of her work has been in people’s homes—both as a nurse and as a midwife. Throughout her career, her first love has been home deliveries, she says, adding proudly, “I have brought more than 500 babies into this world.”

Devoted to her patients, Kemner would travel on horseback or in four-wheel-drive vehicles to reach their homes. “Sometimes it meant hiking up a mountain path, across the creeks, crossing swinging bridges and log footbridges, and knowing where the stepping stones were early in the morning,” says Kemner. And through it all, she would always carry her delivery bag, an important item “since most of the children were told that was where the babies came from!”

Some mothers Kemner encountered seemed mere children themselves; some were already grandmothers. Some were terribly frightened while others took everything in stride, giving birth to a new baby every year. A few mothers had everything needed for the delivery, but many others didn’t. More than once, Kemner recalls washing her hands and the newborn in a hubcap. Some homes were clean and comfortable while in others Kemner chased pigs and chickens out of the house before the birth. And though many children were delivered in the home, some came into this world in Kemner’s Jeep on the way to the hospital.

“This is where God wants me to be,” says Kemner, who this year returned to Lend-A-Hand full time after several years working for the Knox County Home Health Program. “I’m looking forward,” she says, “to having more freedom to do what God wants me to do.”

Read more about Kemner’s experiences as a rural midwife in her book I Am with You Always (Vantage Press). 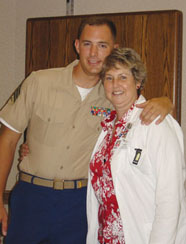 In her work at the Health Education Center at Franklin Square Hospital in Baltimore, Janice Kilby ’71, RN, MS, divides her time between facilitating community education programs and leading a birth and families educational program. In both efforts, she takes a holistic approach to treatment and care.

“Complementary interventions in patient care, when incorporated with other proven methods of care, can be a very effective addition, and increase the likelihood of successful outcomes,” says Kilby, whose educational outreach has included courses in Lamaze childbirth, substance abuse, teen perinatal, infant massage, perinatal exercise, and First Aid/CPR.

Recently, Kilby has begun to incorporate hypnosis in the smoking cessation program she designed and facilitates. “Hypnosis has shown to be an effective step toward relaxation and stress reduction; and both are important elements of intervention and prevention,” she notes. The three-day program also taps other forms of complementary care—including patient training in acupressure, practice in enhanced breathing techniques, and deep relaxation through guided imagery.

Kilby became certified in hypnosis three years ago by the American Board of Hypnotherapy, one of the oldest and most credible certifying boards. “Hypnosis,” she says, “is very effective when combined with other, traditional methods of patient care. In this way it enhances—not replaces—modern medicine.”

Kilby has had a wide-ranging experience as a nurse, including roles as a staff RN (in a variety of clinical settings), head nurse, part-time faculty member, researcher, author, and community health advocate. Her scholarly articles have appeared in the Journal of Perinatal Education and the Journal of Obstetric, Gynecologic, and Neonatal Nursing.

In all her nursing work, says Kilby, “applying complementary health education in practice has been valuable in providing effective, true holistic care.”

JoAnn Coleman, postmaster’s ’95 sent off an entry to the 2006 Lilly Oncology art competition—and then promptly forgot about it. Imagine her surprise when last October she received notice that the photograph she shot in Hawaii had captured 2nd prize in the prestigious international competition.

Presented by Eli Lilly and Company in partnership with the National Coalition for Cancer Survivorship (NCCS), Lilly Oncology on Canvas invited people from across the world to put their feelings about cancer on canvas and in narrative. People diagnosed with any type of cancer, their families and friends, cancer advocates, healthcare providers, artists, and art students were all eligible.

Coleman RN, MS, ANP, ACNP, AOCN, has been a nurse at the Johns Hopkins Hospital’s Department of Surgery since 1974 and now serves as coordinator of the Multidisciplinary Pancreatic Cancer Clinic at The Sidney Kimmel Comprehen-sive Cancer Center. Her interest in the cancer patients comes from her many years of being a nurse involved with the Johns Hopkins Cancer Unit.

She says she was inspired to submit her photo of a serene fountain in Hawaii containing water lilies with a reflection of a Japanese teahouse—which she titled “Tranquility”—because it represents her philosophy of trying to create an aura of tranquility for her patients and their families. “The lovely purple water lilies are a reminder of patients who have pancreatic cancer attempting to maintain harmony, but always with a ripple of reminder of the unknown that may be encountered in their cancer journey.”

Coleman shot the photograph while attending a nursing conference in 2005. “I bought a digital camera the day before my trip and read the instructions on its use while on the 10-hour flight,” she recalls. “Taking in the beauty of the Big Island of Hawaii early one morning, I took this picture and many others in the resort where I was staying.”

Coleman picked up her award at a ceremony in New York City last December, where she met many notable artists and was interviewed by several television stations. “I shared my photograph with many people who had a great interest in art and how one relates art to their encounter with cancer,” she says. “But their questions about my interest in photography and the type of camera I use caught me by surprise. I have never pursued photography as a hobby nor did I use any fancy equipment or lighting! I can truly say this was a beautiful scene with the perfect lighting that caught my eye. The photo was a fluke but something that was meant to be and continues to amaze me.”

“I see the complex and ever-changing combination of physical, sensual, and spiritual elements encountered by patients and their families when faced with pancreatic cancer,” says Coleman, who donated the monetary portion of her award to the Sol Goldman Pancreatic Cancer Research Center at Johns Hopkins.

“My patients have taught me to respect the human qualities of sensitivity, awareness, and communication—all reflected in the ancient and elegant tradition of the Japanese tea ceremony. We should accept and recognize patients as they journey through the cancer experience.”