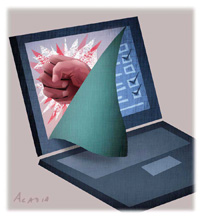 The researchers, who conducted their study among women seeking emergency department (ED) care at a major hospital, found that the self-administered health survey containing questions about intimate partner violence produced dramatic results in reports of IPV risk. Among those women taking the self-administered screening, 19 percent were found to have experienced IPV, while only 1 percent of those in the “usual care” group were detected. Social work referrals were also much higher in the computer-screened group than for those who received usual care.

But the study also underscored the need for more effective follow-up. The authors found that even when patients reported risk for IPV, 48 percent of the time emergency department caregivers did not discuss the issue with the patient.

In their conclusions, Campbell, Trautman, and colleagues emphasize the need for enhanced screening and detection methods and for better follow-up. In an earlier intimate partner homicide study, Campbell and colleagues found that 43 percent of the women who were killed had been seen in the health care system—most often in the emergency department—in the year before they were murdered. She notes, “These women might have been saved if we had identified them as abused.”