A Unique Opportunity to Become Active and Celebrate Your Colleagues 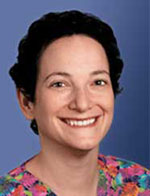 Realizing that patients have a fullness in their life and relating to them around things other than their disease…makes patients feel safe and valued.”

As an oncology nurse at Johns Hopkins Hospital, Janet Orlin ’06 deals with intense situations every day. Many of the patients she works with are terminally ill, which adds yet another level of stress to an already demanding job. Yet, Orlin embraces the challenge of providing the best patient care she can not only physically, but also mentally, emotionally and spiritually.

In addition to her nursing degree, Orlin holds two master’s degrees-one in divinity and a second in science education.

Her decision to enter the nursing field stemmed directly from her own interaction with oncology nurses. She was diagnosed with breast cancer in 2000, and the care she received during this trying time in her life inspired her to render that same level of care to others.

“I didn’t realize the critical role that a nurse plays in the care of a patient until I was a patient,” Orlin stated. “The nurses were the ones who related to me as a human.”

When Orlin herself became a nurse, she stuck to her commitment of providing patients with the best care she could, and more importantly, relating to them as people who have lives and families. Her efforts were recognized and in 2006, Orlin received the Cherokee Inspired Comfort Award for demonstrating exceptional service and having a positive impact on others’ lives.

Orlin describes one such experience: “I had a patient who returned every two weeks for treatment, a man in his 70s who was generally quite grumpy and negative,” Orlin states. “He had a poor prognosis and was undergoing an experimental treatment. One day, I had noticed that he had made a sketch on a piece of paper with a pen. I asked him about it and this led to us really connecting through art.” She goes on to say that this ultimately softened his mood and when he would come back for subsequent visits, the patient would bring color copies of some of his paintings for Orlin to see. She gave him art supplies to use from a cart of donated supplies.

Her desire to provide optimum patient care is also reflected in the training she took as a health care chaplain. While still a student nurse, Orlin completed 1,000 hours of supervised training to learn how to deal with a variety of issues, including grief/bereavement counseling. “I think that in general I am disposed to have a more holistic view of illness, but my training as a health care chaplain certainly makes me additionally sensitive to and skilled at taking care of/attending to patients needs,” she says.

Her chaplain training is not only limited to patient care. Some-times, nurses will feel that they have made an error or somehow contributed to an adverse patient outcome through sub-optimal actions. Orlin says she has had the opportunity to assist her colleagues in situations involving death and potential psychic trauma.

“Oncology nurses probably tend to have warmer, closer contact with patients, compared to other specialties,” Orlin says. “In fact, I think wanting a sort of intimacy and real connection with patients is one reason that a nurse may choose to go into this specialty.”

A Unique Opportunity to Become Active and Celebrate Your Colleagues

One way to get involved with the Nursing Alumni Association is to help gather information that can be used to nominate your fellow alumni for the three prestigious awards given each year to deserving alumni.

Any member of the alumni community can initiate the nomination, and there is no limit to the number of awards given each year. All nominees are considered, and all nominees who meet the specific award criteria are given the award.

The three university alumni awards described below include: the Heritage Award, the Distinguished Alumnus Award, and the Woodrow Wilson Award for Distinguished Government Service. You can help recognize fellow alumni by sending your suggestion for nomination and information about them to Melinda Rose at the alumni office.

The Heritage Award, established in 1973, honors alumni and friends of Johns Hopkins who have contributed outstanding service over an extended period to the progress of the University or the activities of the Alumni Association. A few nursing alumni who have received the Heritage Award include Virginia Betzold, Class of 1933; Loretta Opawski Hicks, Class of 1934; and Margaret Courtney, Class of 1940. Ms Betzold devoted her entire nursing career to the Johns Hopkins Hospital School of Nursing, working with three different directors, counseling numerous students, and mentoring a large number of faculty. Among Loretta Hicks’ accomplishments during her nursing career was her 28 years of service as secretary of the Pittsburgh alumni chapter. Margaret Courtney, who spent her entire career at Hopkins, held various positions within the school, playing a unique role during the school’s transition from the diploma program to the university program.

The Distinguished Alumnus Award, established in 1978, honors alumni who have typified the Johns Hopkins tradition of excellence, and brought credit to the University by their personal accomplishment, professional achievement, or humanitarian service. Nancy Schartner McKelvey, Class of 1964, recently received the Distinguished Alumna Award for her outstanding work as Chief Nurse of the American Red Cross (ARC). Sally Sample, Class of 1954, also received the Distinguished Alumna Award for her pioneering work in the evolution of the joint-appointment clinical nurse specialist role, her service as Chairperson of the American Nurses’ Association Cabinet on Nursing Service, and her work on the ANA Board of Directors which included representing the ANA in the first Sino-American Nursing conference in Beijing, China.

And lastly, the Woodrow Wilson Award for Distinguished Government Service, established in 1990, which honors alumni who have brought credit to the University by their current or recently concluded distinguished public service as elected or appointed officials. Ambassador Linda Zack Tarr-Whelan, Class of 1960, recently received the Woodrow Wilson Award for her service as the U.S. Ambassador and Representative on the U.N. Commission on the Status of Women (CSW) which included leading the United States’ efforts to achieve women’s

As you learn about your fellow alumni’s accomplishments, please take a moment to nominate your alumni colleagues for these three prestigious alumni awards. Good times to bestow the awards are at your colleague’s retirement, during a reunion year, or after completion of a particularly significant project. Get involved-send your suggestions and information about your colleagues to Melinda Rose at the alumni office. 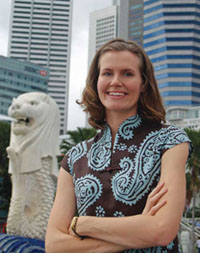 For many people, leaving the comfort of their homes and the familiarity of their way of life is a scary thing. Yet, for Jessica Jue, Accelerated ’04, spending a semester in China left a lasting impression on her.

“A passion for studying Mandarin and Chinese culture brought me back to Asia after graduation,” she says. Jue had previously studied Chinese at Kalamazoo College and completed a semester in China before coming to JHUSON. While she was at Hopkins, Jue again had the opportunity to travel abroad, this time working at Beijing hospital as part of her leadership course.

“After these experiences, I had to come back for a longer stretch [of time],” Jue said.

She combined her interest of Asian culture with another strong passion-working with older adults-and following graduation from Hopkins, moved to Singapore to volunteer at a day facility with Singaporeans who had early to mid-stage Alzheimer’s.

Because Alzheimer’s is such a degenerating disease, Jue said that one of the most rewarding aspects of her job is raising the quality of someone’s life.

“One week…we took a day trip into Chinatown. An older gentleman-rarely communicative in the clinic-paused staring at piles of wrapped coins. I asked him what they were and without skipping a beat, he said, ‘These bring luck to a new home. You put them in the back corners of the drawers and it brings money into the house.’ That day was the most expressive I’d seen him,” Jue stated. She used this example to illustrate that in order to work closely and engage Alzheimer’s patients, it’s necessary to utilize this “cultural acumen.” According to Jue, using items that are significant and commonplace in Singaporean culture helped tremendously with Alzheimer’s patients’ therapy. Knowing their language was also helpful. “Many older Singaporeans speak a southern Chinese dialect first, Mandarin second, and English a distant third.”

Jue enjoys working with older adults so much, she plans to continue when she returns to the United States this spring.

“I can say I want to work as an RN…and would love to find a situation that splits my time between a hospital or clinic with home visits,” she said. “I hope to take some components of Asian health beliefs and incorporate those into my practice, like an emphasis on mental and physical exercise at every age and the essential role nutrition plays in healing.”