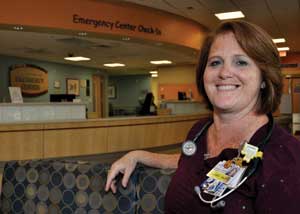 Last week I had the chance to sit down with Nightwatch’s Dan Flynn to discuss what it’s like being an RN, a paramedic, and a male in the medical field. Nightwatch is a reality TV show on A&E that follows the first responders of New Orleans that work the night shift. Dan was in Baltimore a few weeks ago for the EMS Today conference.

Before I began my interview with Dan he took a few minutes to chat with the Johns Hopkins Lifeline team, which provides advanced life support and critical care services for patients referred to Johns Hopkins-affiliated hospitals in Maryland and Washington, DC. Pictured here is Dan with Scott Newton, director of nursing at Johns Hopkins Hospital in the Emergency Medicine & Lifeline Critical Care Transport Team department, with one of Lifeline’s new ambulances.

What made you want to go into the medical field?

Growing up my father was a firefighter so I was always hanging around the firehouse. A car accident call came in and my dad asked me if I wanted to go along for a ride. I waited in the car once we got to the scene and it was a very bad accident – The patient’s body was hanging out the car window, was obviously dead, and here I am seeing this at 11 years old. I paid a lot of attention and watched the system of orchestrated events going on – What police were doing, what fire was doing, and what EMS was doing. I liked seeing them all work together.

I started working for Mandeville Fire Department in 2001 straight out of high school and began with New Orleans EMS in 2003. I failed the National Registry of EMT Basic Exam 3 times, finally passing on the 4th take. That’s a reminder not just for myself, but for everyone to keep going and not give up.

In 2007 I graduated with a Bachelor’s in biology and went back to school a few years later to receive my Bachelor’s in nursing and become an RN in 2014. I was working while in nursing school so I would drive 1.5 hours to school, then back home to work the night shift. It was an accelerated nursing program and there were a lot of career changers in my class. There were only three males in the class, including me, out of 45 students and only about half ended up graduating – Last I heard it was maybe 17 or 18 people.

Were you a paramedic or RN first? How would you describe the difference between the two?

I was a paramedic first. The delivery of medicine is the main difference. Paramedics are taught to manage acute illnesses whereas RNs do more holistic, long term, definitive care. For example as a paramedic we go in and stop the bleeding, get the patient stabilized, give them medicine to counteract a drug overdose.

It’s the first responders’ job to let nurses know what’s going on with the patient before/when you arrive at the hospital. How else do paramedics and nurses work together?

One thing about our teams is that we use a radio system and no phones. Something surprising to me is how often physicians and nurses request report from the scene of the accident. They will want more details than just the basic information we tell them. A lot of nurses and physicians in the ER and ICU do each other’s jobs.

Paramedics and nurses have good relationships and after going to nursing school I noticed there can sometimes be an educational gap, but it’s a mutual understanding.

Describe how you felt during nursing school in three words.

What’s it like to be a male in the field, since nurses are known to be mostly female?

I’m not sure if this is just a Southern thing, but being a male in the field I get a lot of attention. Our patients actually prefer male nurses.

Working in the ER, I kind of serve as a “big brother” figure to the other female nurses. They look up to me to not just as another nurse they work with, but to protect them. This is if they have a patient that’s under the influence, combative, intoxicated, etc.

You’ve been in Baltimore for a few days now, how does the city compare to New Orleans?

Baltimore’s comparable to New Orleans when it comes to size and it has a pleasant, home-like feel. The other night walking around the Inner Harbor, a man was yelling to get our attention and once we stopped to see what he had to say, he was a really nice guy and just wanted to thank us for what we do.

Baltimore definitely has its own accent.

What advice do you have for people considering becoming a paramedic or a nurse?

Volunteer and shadow! Expose yourself first.

Do you get nervous around the cameras? Do they get in the way?

The only thing I get nervous about with the cameras is the admins seeing us work. There might be something I thought I did really well, and then they could critique you on it. Admins don’t normally go around with you for a full shift, but now they have access to see everything you do.

It took a few weeks for us and the camera crew to learn what each other do. The crew had only worked shows before where it was actors versus the death of a human on the spot. After a few weeks of working together, they learned our flow and processes – The places we stand, the way we put people into the unit, etc. Also, you say ambulance, we say unit.

What do you do when you’re not working?

I have my own auto shop and I’m a certified auto tech. My wife and I also have a few investment properties. We love doing projects. One nice thing about working part time as a paramedic and part time is an RN is that when I’m back on my RN shift, I can go check on some of my patients that I helped as a paramedic. I like to bridge the gap and often times I give patients some old clothes or shoes I’ve gathered together. A lot of them come right off the street with nothing else to wear.

Take a look at Dan and his partner Titus in action when they are called to the scene for a man shot in the chest. Considering the situation, the victim had some unexpected good humor.[youtube]https://youtu.be/AmVmkZKy1yw[/youtube]

ABOUT THE INTERVIEWEE: DAN FLYNN

Dan Flynn is a nationally registered paramedic and registered nurse in New Orleans, Louisiana. He’s been working in the EMS field since 2001. Certificate of Paramedic (2005), Bachelors of Science (2010), Bachelors in Nursing (2014), ACLS and PALS certified, HAZMAT technician. Dan is a member of the National Association of Emergency Medical Technicians as well as additional nursing organizations. He’s had multiple achievements in his career including working as a paramedic/firefighter during and following Hurricane Katrina and appearing in A&E’s documentary series, Nightwatch. Dan resides in Covington, LA with his wife Heather and two Italian Greyhounds.

ABOUT THE AUTHOR/INTERVIEWER: SARAH ENGEL

As a Social & Digital Media Coordinator, Sarah helps all faculty, staff, and students around the School of Nursing spread the word regarding their recent findings, events, travels, and endeavors.