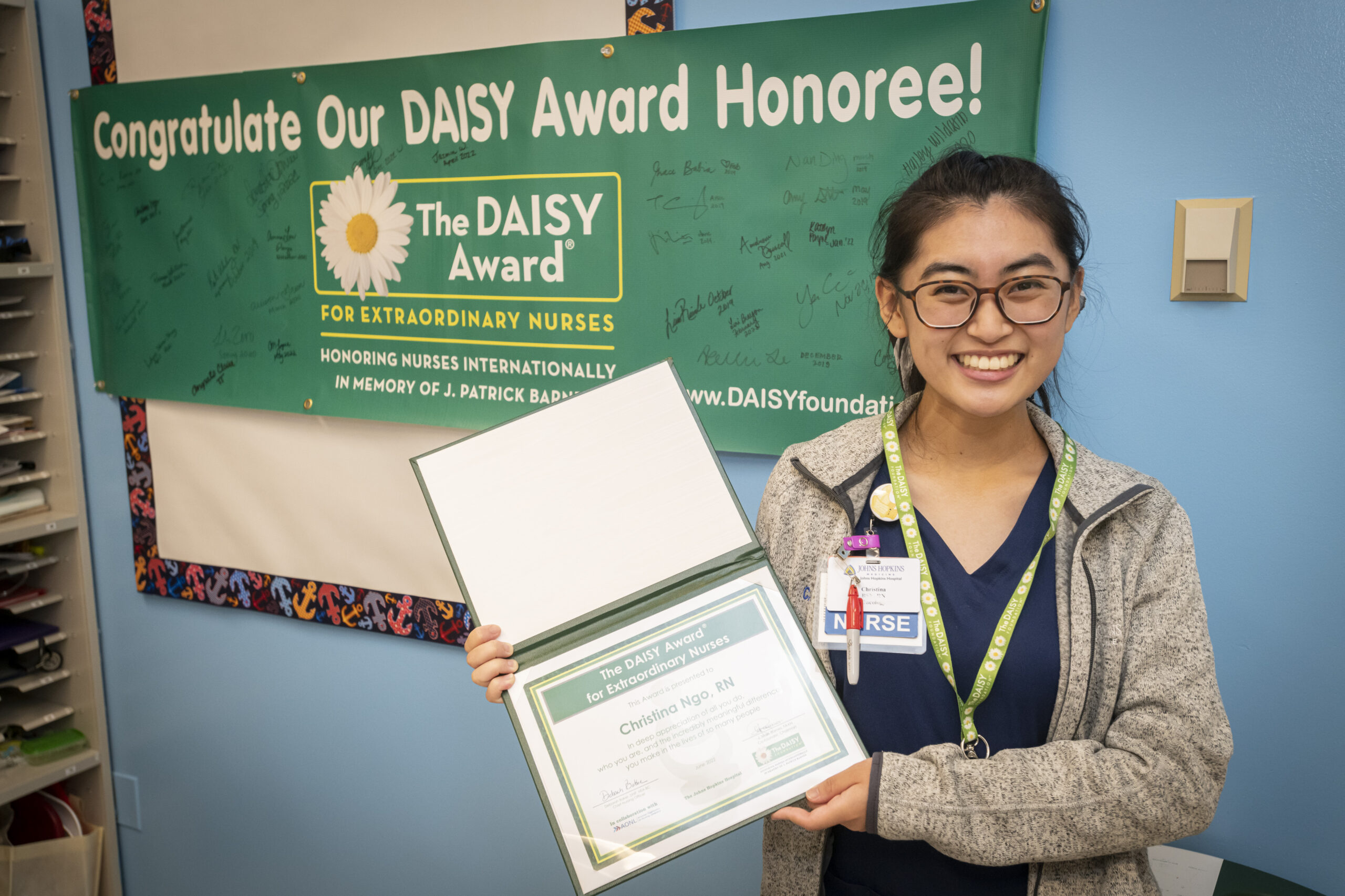 Katelyn “Kate” Payne of the Pediatric Intensive Care Unit was nominated by a fellow nurse for incredibly loving and selfless care she provided to a patient who had been on the unit for several months, and the support she provided to the patient’s family during an unbelievably difficult time. The moving nomination letter described Kate’s special connection to this patient and family: She “celebrated his wins, no matter how big or small” and went “above and beyond for them on days when she wasn’t even their assigned nurse. … Kate touched this family’s life and loved their sweet, sweet child in ways that they will cherish forever and absolutely never forget.”

Colleague Kat Dudley nominated Weinberg 3 operating room nurse Lori Beayon for going above and beyond to help several patients after her shift was over. As Beayon was headed to her car in the McElderry garage, she realized the elevators were not working and nearby stairs were closed for construction. Noticing several elderly visitors waiting for the elevator, jumped to help get them safely to their destinations. “Although she was off duty, Lori took it upon herself to help patients in need.”

Rosemary Kollosch of Zayed 10 West was nominated by a patient for being an attentive, expert, and comforting nurse. During a time of distress post-surgery, Kollosch rushed to help, providing the patient with skilled care and reassurance that everything was going to be OK. She continued to check in on the patient the following day to see how he was doing. “It was just so comforting, it’s hard to describe,” remarked the patient.

Jazmin Williams of Zayed 11 West was nominated by a patient admitted overnight for monitoring after surgery. The patient wrote that he knew he was in good hands as soon as he met Williams. She calmed him, made him and his spouse feel comfortable, listened to all of his concerns, and expertly answered all of his questions. The patient was so impressed with Williams’ knowledge and expertise, he assumed she must be a seasoned nurse. Told she had been a nurse for just a year and a half, the patient was “shocked and amazed. She seemed settled into the profession like she had been doing it for years.”

Claire Logue, senior clinical nurse from the JHOC Hematology Clinic, was nominated by a patient (who also happened to be a nurse and DAISY winner at another hospital) for her expertise, attention to detail, and dedication. The patient wrote that Logue was instrumental in ensuring that her care plan was specialized and tailored to her unique situation, communicating frequently and providing the patient with trust and compassion during a difficult time. “Claire makes you feel like you are her only patient.”

Christina Ngo, from Weinberg 5C, was nominated by a patient’s sister, who says she was a ray of sunshine during an extremely difficult time for their family. In the nomination letter, she wrote about Ngo’s compassion, proactive attitude, and ability to put the patient at ease. Most importantly, she really listened to the patient, and acted immediately to get her treatment when she was especially unwell. “It comforted her that there is someone like Christina she could depend on to look after her at the time when she is most vulnerable,” the patient’s sister wrote.