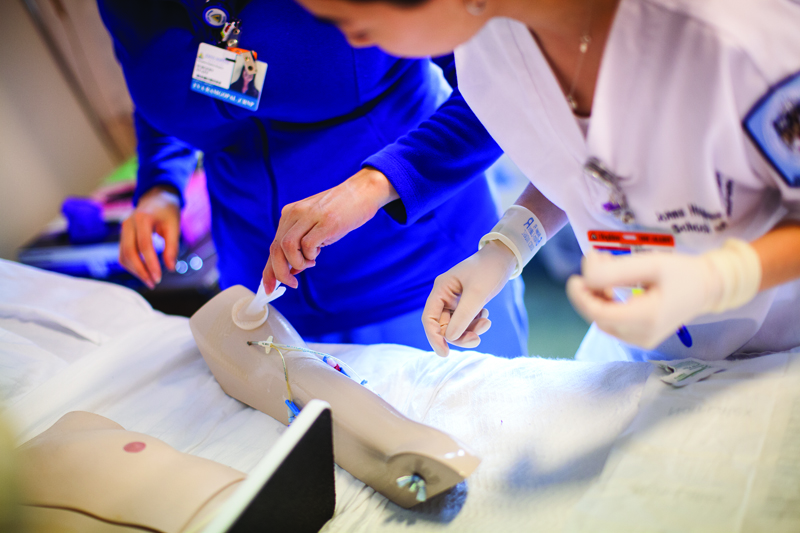 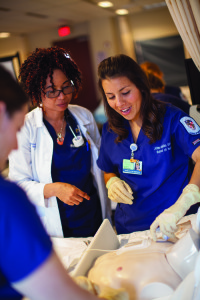 A perfect storm threatens nurses and nursing education today. Soon, a tsunami of newly insured Americans will flood a health care system already overflowing with patients, many with untreated psychiatric issues. New technology must be mastered quickly in a collaborative health care environment that bears little resemblance to the hospital-centric practice of yore. And a new generation of nursing students demands information more immediately than instructors can deliver it by classroom methods.

But just as in a Hollywood blockbuster, the crisis is bringing out the best in those confronting the challenges. The Johns Hopkins University School of Nursing (JHUSON) has been revamping its curriculum to better equip a new generation of nurses—mature, resourceful, and tech savvy—to venture out into this storm.

Driven by changes within the profession and without, nursing education at the School is moving quickly from the traditional lecture and clinical rotation model to a far more immersive experience focused on developing skills outside the classroom in a wide range of settings. This new model includes a greater emphasis on technology, interprofessional education, and evidence-based practice as well as building understanding of social and cultural factors that affect health behaviors.

This new style of learning is much better suited to the changing student demographic than the old lecture/rotation model. For one thing, JHUSON students are older than those of previous generations, entering the School at an average age of 28. “Our students come in with a bachelor’s degree and a world of experiences,” says Pamela R. Jeffries, PhD, RN, FAAN, former Associate Dean for Academic Affairs and a leader in developing innovative teaching strategies and new technology. (Jeffries was recently named Vice Provost for Digital Initiatives, the first to ever hold the position at Johns Hopkins University.) 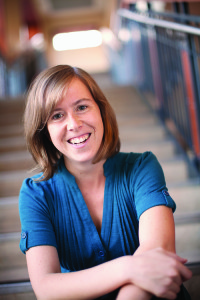 Take Meg Adams ’12. At 22, after earning a BA in Hispanic studies at Vassar, she signed up as a civilian contractor at the Amundsen-Scott South Pole Station where she refueled planes, operated heavy equipment, and carried out other maintenance duties. “I think I was the youngest person there,” Adams says. She also toiled as a seasonal laborer and human rights activist in Mexico before arriving in Baltimore to pursue a baccalaureate at JHUSON. Now 28 and working her way through the FNP/MPH program, Adams plans to work as a nurse practitioner delivering care in underserved areas. “I wanted a career that would allow me to combine my interest in social activism, hands-on labor, and intellectual work,” she says.

Despite majoring in biology at St. Mary’s College in Southern Maryland, Colin Doyle ’11 had never considered nursing until he spent three years in Cambodia with the Peace Corps as a community educator working with a nurse practitioner who served as medical officer for the district. He recalls the feeling of seeing a friend of his host family die after a burst appendix. “I was frustrated that I couldn’t help more. There was no acute care in our district. I saw a huge window for very basic interventions.” The experience led him to JHUSON, which has a fellowship program for returning Peace Corps volunteers.

Students like Adams and Doyle “come in with high expectations and are very goal-directed,” according to Jeffries. Nursing education in general has not kept pace with this changing student population nor with the challenges that will confront them in a rapidly evolving health care delivery system, Jeffries points out. “Nationally, we are still teaching the way that I was taught in the 1970s, though data, evidence, and surveys from executive advisory boards today say that we are not preparing nurses well to transition to clinical practice.”

At Hopkins, students begin their clinical work early in the first semester, with eight students per instructor. This is a great advantage, says Doyle. “Here you are in the hospital in the second week of school. It helps you remember why you are in nursing school in the first place.”

But for student nurses, “There are a lot of barriers to practice [with actual patients], rightly so because of safety and policy issues,” according to Jeffries.
“They can’t practice as a member of the team and they don’t have the ability to problem solve.”

Jeffries was an early advocate of simulations to ameliorate this problem and has helped JHUSON become a leader in the use of this technology. The School now has 12 high-fidelity simulators that allow students to practice evaluating and responding to a wide range of conditions. “We’ve done a child with sickle cell, an adult with a gunshot wound, heart disease, seizures, allergic reactions. We haven’t done stroke yet but I’m sure it’s on the forecast,” says Jessica Ockimey, Simulation and Nursing Lab Manager. 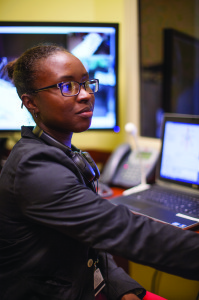 On a sunny October Monday, the mezzanine floor of the Anne M. Pinkard Building is a disaster zone. Tree branches and debris block the hallway and within its rooms children and adults moan and cry out for assistance. Students, faculty, and School of Nursing staff struggle to manage victims as a limping stream of new patients pours into the triage area.

Though it looks like a tornado has swept through East Baltimore, the scene is merely a simulation—one of an increasing number of opportunities at the School for students to practice in true-to-life scenarios. Increasingly, they practice diagnostic and treatment skills on high-fidelity simulators—manikins with beating hearts that breathe, bleed, vomit, urinate, seize, shake, and have babies.

On most days, Ockimey sets up the lab’s four rooms as a clinical setting. During these simulations, three students enact the roles of charge nurse, floor nurse, and family member while five classmates observe from a debriefing room. Sessions are taped so the whole group can review and critique them. “We try to make the experience as real as possible,” Ockimey says.

Once a month, medical students from the JHU School of Medicine and other students training to be pastoral counselors, pharmacists, and social workers join in. “Typically, the scenario is delivering bad news,” Ockimey says. “It helps students from each department learn to communicate, deliver information to each other, and make sure everyone has the correct information.”

Meg Adams says that she found the interprofessional simulation extraordinarily valuable. “We managed to build an atmosphere of genuine tension. I found myself forgetting that I was dealing with someone who wasn’t really upset.”

This type of simulation more closely approximates the increasingly team-centered approach students will encounter when they graduate, Jeffries points out. “We are trying to create a sustainable integration of interprofessional education across the curriculum, sometimes in hospital simulations but also via home visits. It helps students in medicine, nursing, pastoral care, pharmacy, public health, and other disciplines learn about each other’s roles and responsibilities.”

There is an urgent need for this type of education, especially as delivery of health care moves deeper into community settings. So students also spend more of their time in the field, working together with their professors in clinics and community health centers.

Adams, for example, is working 10 hours a week at the Wald Community Nursing Clinic in East Baltimore. “It’s learning in a hands-on, service-oriented way,” she says. “We do mostly health promotion, focusing on diet, exercise, chronic disease counseling.” 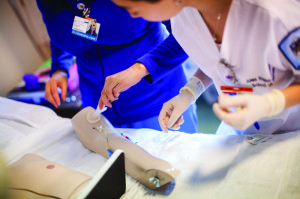 Nurses who work in community settings encounter a wide range of psychiatric disorders, from substance abuse to depression and bipolar disorder. As the Affordable Care Act brings an estimated 6 million to 10 million currently uninsured Americans into the health care system, the need for community-based mental health screening and intervention will mushroom, says Karan Kverno, Assistant Professor in the Department of Acute and Chronic Care. “The workforce is already very strained in terms of psychiatric care providers.”

In Maryland, for example, approximately 62,000 children live with serious mental health conditions. Other populations are also in urgent need of care. “One in five older adults has psychiatric issues, but there is a shortage of geriatric mental health care providers,” says Kverno. “Returning veterans have very high mental health care needs but access to care through the Veterans Administration can be very slow.”

Nurse practitioners are particularly well-equipped to provide these services in underserved areas of the state, she says.

Kverno has received nearly $300,000 from the Maryland Health Services Cost Review Commission, administered by the Maryland Higher Education Commission, to set up the program, which will welcome its first cohort of 10 students in Fall 2014. Most of the education will be delivered online but students will also work with preceptors at clinical sites. “We are developing contracts for two semester-long comprehensive clinical training courses with preceptors at clinical sites in outlying areas where the nurses are living so they can keep up their practices while they are being trained,” she says. “It’s a real strength of the program.”

Coursework will cover the neurobiological basis of mental and addiction disorders and psychopharmacology, psychotherapeutic frameworks and modalities, psychiatric diagnosis and symptom and illness management, and both pediatric and geriatric variations of health assessment and measurement. The goal , Kverno says, “is to teach brief screening, intervention, and treatment that students can use right away in their practices.”

But even high-tech hospital nurses would benefit from more psych education, says Colin Doyle, who fell in love with critical care while pursuing a nursing degree at the School. Currently working at the R. Adams Cowley Shock Trauma Center at the University of Maryland, Doyle says he and his colleagues regularly encounter patients—and families—with anxiety, depression, substance abuse issues, and other mental illness. “You wind up treating a whole unit of people.”

His clinical training at JHUSON led him to critical care, a field that he didn’t expect to love, says Doyle. “I enjoyed the hospital environment more than I thought I would.” Now applying to nurse anesthetist programs, Doyle might not have discovered his affinity for critical care without the broad range of experiences he was offered at JHUSON, he says. “I came to nursing the long way around, and wound up enjoying things I didn’t think I would love. I found niches that fit me.”