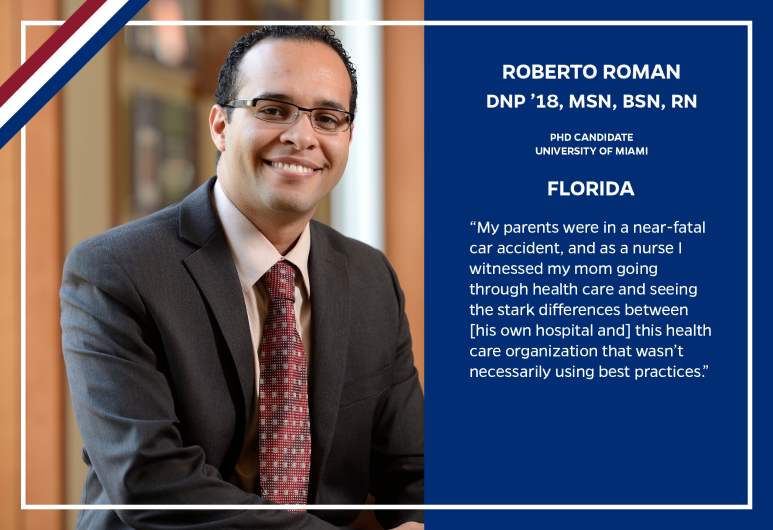 Roberto Roman Laporte turns outsiders into insiders, a skill he had to learn early.

Roman Laporte helped a South Florida health care organization run one of the largest new-nurse residencies in the nation, an ANCC-accredited program that, twice each year, onboarded 130 to 140 new nursing grads from all specialties—“so we’re talking medical-surgery, float pool, ICU, all specialties that the hospital needed”—and prepped them to be participants in evidence-based care. Through the DNP program at the Johns Hopkins School of Nursing, “I was able to dive into the literature, assess the culture, and tailor something that would work within our residency … and do something within a large group of new graduate nurses that is manageable and meaningful to them.”

He understands that graduates of these nurse residencies become key assets for any hospital or health care setting. He knows personally the importance of evidence-based practice: “My parents were in a near-fatal car accident, and as a nurse, I witnessed my mom go through health care and saw the stark differences between the care she received and what I knew as best practices … seeing it from the other side was eye opening.”

It’s an experience he has shared with new residents as part of his ice-breaking “TED Talk.” He has spoken about discrepancies they might themselves witness even as they are being precepted “to give them those ‘a-ha’ moments and get them to start asking those ‘why?’ questions, trying to build that culture of inquiry from Day One of their residency.”

After his success with these residencies, Roman Laporte was recruited to become a nurse scientist in the Nursing Health Sciences Department at Baptist Health South Florida, where he’d started out as a file clerk and ended up as part of a team that led the hospital to Magnet status. “They had a position that doesn’t open up very frequently, and one of the facilitators who was a nurse scientist kind of tapped me on the shoulder and said, ‘Hey, we saw what you did with evidence-based practice. We really loved how you engaged the nurses. We think you’d be a great asset for our team.’ ”

“So, I stepped outside my comfort zone.”

Roman Laporte has always felt like an outsider. A military brat, he was born in Hawaii, but the family soon moved to Kentucky. From there, it was to Panama, then Fayetteville, NC. He wanted to immerse himself in the Latino community he missed and brush up on the conversational Spanish he lost while growing up. So he relocated to Miami, FL in 2002, where he started his nursing career.

In fact, Roman Laporte—who has worked as a medical-surgical registered nurse as well as a nurse educator and nurse scientist—never thought Johns Hopkins would be a feasible opportunity in his academic career, despite matching the DNP program to a T. (“If you want evidence-based, you go to Johns Hopkins.”) But based on the recommendation of a colleague already in the DNP program, Roman Laporte made a call to the Johns Hopkins School of Nursing and, to his surprise, was extended an invitation. Goodbye, hesitancy. “When Johns Hopkins asks for an interview, you fly to Baltimore and do the interview.”

DNP in hand, he’s now earning a PhD and works as a research assistant at the University of Miami. (He has always relied upon PhD colleagues when writing research protocols, a knowledge gap he’s bent on closing.)

“I always felt like a minority,” he explains of his international journey. “In coming to Miami, I was able to get a little of that back”—including the Spanish. Now he simply feels like a unicorn: “I am a rarity in the nursing realm, a Puerto Rican, Latino, male nurse, soon to have two doctorate degrees in nursing.” All of this makes Roman Laporte a perfect fit for the diverse community he serves in and around Miami, and he’s staying put. “I understand and can be a voice for the community, impacting policy, and working toward establishing more inclusive health care for the LGBT community. — Steve St. Angelo