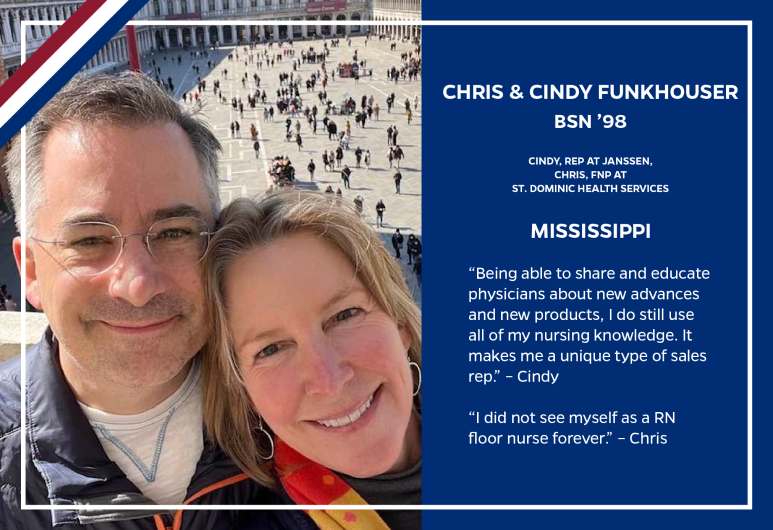 Cindy Guess was a single mother running (almost) late for Day One of nursing school. Chris Funkhouser—“he’s always early; I’m always … right on time”—was seated for his first day in what would become the Class of 1998. She scouted the room and hustled to grab the only chair available, right next to Funkhouser. After quick hellos and a bit of small talk, Chris Funkhouser and Cindy Guess learned they had been basically neighbors in Baltimore’s suburbs. What a coincidence, in a class that she describes today as a United Nations gathering, that they’d end up side by side.

She needed a book for the class; he walked her to the JHU bookstore. When it wasn’t available, he loaned her his copy. Didn’t he need it? “Well, you’re just up the street.” Fast friends.

But she was a decade older, struggling to balance school with a 3-year-old daughter, and certainly not looking for love. Still, one day by the magnolias outside the Dome, she couldn’t help but notice: “I caught that look in his eye and thought, ‘Isn’t that cute. He has a crush on me.’”

After graduation, Cindy decided to move home to Mississippi, hopeful that family members could help with child care as she began three-days-on, three-days-off shift work as an RN. Chris, who had been working at Johns Hopkins Hospital’s general psychiatry unit as a tech, announced he was moving there too. She wasn’t making any promises, but she wasn’t shoving him away either. He was persuasive (“like a dog with a bone,” she says), and by that point had won her heart. “Well, look at him,” she says.

Cindy was unfortunately wrong about finding family eager to pitch in with child care, and fell back on a previous field, pharmaceutical sales, for the money and stability.

He landed a position on the University of Mississippi Medical Center’s psychiatry wing, but had his sights set much higher, regarding his career and Cindy. “I did not see myself as a RN floor nurse forever,” he explains. That name, though, screamed “outsider.” “The wasn’t another Funkhouser in the entire state of Mississippi,” Cindy explains. “Absolutely everybody knew my dad, Dr. Guess.”

Chris Funkhouser set about becoming a nurse practitioner, finding a great need for his services even as he bumped heads with the Old Boy Network. “Of all the good things I just said about the state of Mississippi,” Cindy says, “we can be a little backward in some areas.” Take male nurses. Or NPs taking roles previously performed exclusively by physicians. There were passive-aggressive slights, like leaving his name off the door or the directory, so patients couldn’t find him.

This fall, as Cindy and Chris Funkhouser mark their 23rd wedding anniversary, Cindy remains with Janssen, a subsidiary of Johnson & Johnson. “I wish I had been able to stay in nursing,” she explains. “But in being able to share and educate physicians about new advances and new products, I do still use all of my nursing knowledge. It makes me a unique type of sales rep.”

She’s particularly proud of the company’s advances in targeted treatments for specific cancers like multiple myeloma. “Previous diagnosis was three to five years with chemo.” Now, with an enormous change in thinking paired with new drugs, she says, “You have some of the top hematologists in the country using the word ‘cure.’ ”

Chris Funkhouser is with St. Dominic Health Services. The community he serves includes many of the rural areas around Jackson that lack adequate health care. “People drive two to three hours to see us,” he says. Things are considerably better for FNPs and male nurses who’ve come behind him, something he attributes to experience in the role “and the gray hairs that I’ve gained” making him more comfortable to stand up for what’s right. Cindy is more direct. “He’s selling himself short. He did all that for them.”

And he’s now a Mississippian through and through. Ask Cindy.