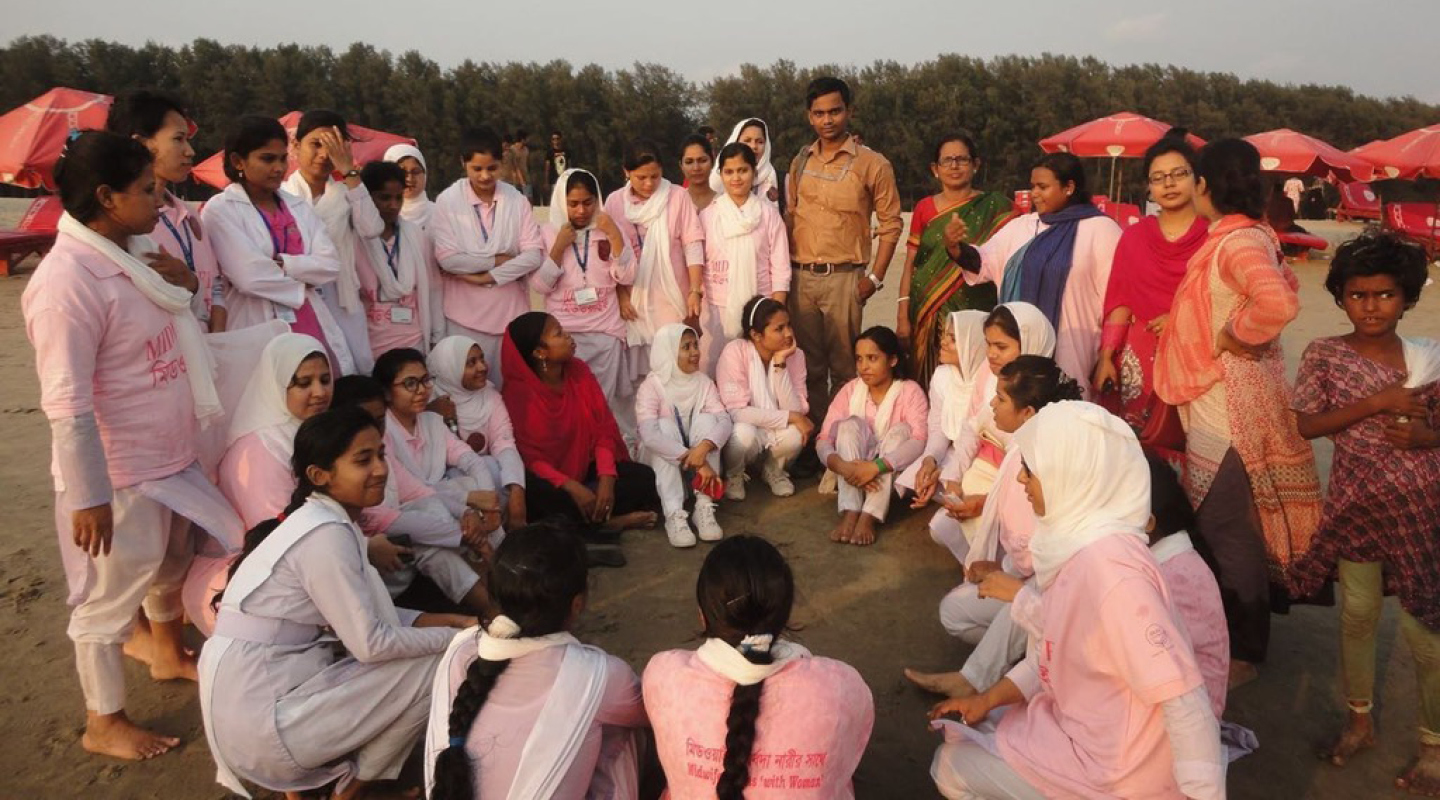 When Jhpiego’s new chief nursing and midwifery officer reminisces about her earliest influences, a kindly, senior midwife comes to mind.

Navy blue, Hardtman clarifies. Dark and stark. Not like the almost iridescent iris shade of dress (and matching lipstick) that Hardtman happens to be wearing during a Zoom meet-and-greet with new colleagues. And not like the shimmering turquoise of the sea that surrounds the pink sand island of Bermuda, where midwives like Iris were a mainstay in bustling health department offices, full of people seeking all manner of care. They also held sway at the local hospital where Hardtman volunteered as a candy striper; where as a young girl she saw, for the first time, a baby being born.

Midwifery appealed to her early on, Hardtman says. It offered the prospect of a professional title and decent living wage. And, more importantly, a promise to never be bored. “I always thought of it as a fate worse than death,” she says, “to be stuck in one office, in one place, forever.”

In the past two decades, prior to joining Jhpiego, this Johns Hopkins School of Nursing alumna (RN to BSN ’96) was a globetrotting midwife educator and consultant working in Bangladesh, Rwanda, Nigeria, Indonesia, Mongolia, and on the Turkish-Syrian border, where she met midwives whose perilous journeys from their war-torn country reduced her to tears.

Far-flung conflict zones notwithstanding, the world is full of risky places to give birth. You can find them right here in the United States where, not incidentally, women of color fare worse than others. Hardtman, whose clinical midwifery practice is based at the Atlanta Medical Center, co-authored a recent piece with Franka Cadée, president of the International Confederation of Midwives (ICM), that points out, “During the Black Lives Matter movement, inside the confines of the global COVID-19 pandemic, we’ve been painfully reminded of the distressing maternal health outcomes for black American women highlighted in media reports, political speeches, and within the communities impacted by their real-life consequences.”

Hardtman had a job in Pakistan lined up when she applied to the Johns Hopkins School of Nursing (JHSON), which she considered “a long shot that was way over my budget.” When both an acceptance and scholarship money came through, she made her way from Bermuda to Baltimore. “[JHSON] taught me to be an outlier and to speak out,” she recalls. “There were few RN to BSN students at the time, and class discussions were always an exercise in real versus ideal.”

Among her best memories of that time are the community health rotation and the support of Jacquelyn Campbell, PhD, MSN, RN, a national leader in research and advocacy in the field of domestic and intimate partner violence. “Professor Campbell is my rock star, for always,” says Hardtman. “When I went to my master’s work, one of the major projects had to do with domestic violence in pregnancy.”

At Jhpiego, Hardtman will drive Jhpiego’s strategic initiatives on building a confident, skilled clinical nursing and midwifery workforce worldwide, develop nursing and midwifery leaders globally, strengthen the respective professional associations, and represent the organization on global health workforce issues. And, as throughout her career, Hardtman aims to address inequities in care. She’s not in midwifery for the simple pleasure of holding newborns—though she likes babies well enough, having helped to deliver thousands, and, with the assistance of a midwife, having had two of her own, a son and a daughter.

Rather, it’s women, especially those from underserved populations, who motivate her.

“It’s the totality of the entire reproductive life course of women that keeps me coming back,” she says, “from teaching an 11-year-old about her cycle and trying to pull away some of the mystique and the horror of menstrual bleeding, through supporting a menopausal woman with her changes. “I try to help them to lean into their intuition, and not just for labor pain. I say: ‘The same skills that you use to get through a birth are your life skills; it’s no different.’”

Midwifery, she says, is “being with women” not just during childbirth but throughout the decades. Its philosophy is holistic; its approach, top-to-bottom. “If you pay attention to how women were represented historically, you’ll find ancient drawings, texts, and statuettes depicting a fierce birthing creature,” she says. “Then, they’re reduced slowly, slowly. In more modern textbooks, all you see of them is the perineum.”

Midwives, she says, are duty-bound to take on a “whole lot of unlovely stuff that nobody talks about.” Tackling boilerplate “yucky stuff” like long-lasting hemorrhoids is nothing, she contends, compared to telling a woman who has been monogamous for 15 years that she has HIV. “Midwifery requires me to be grounded in reality,” Hardtman says. “To offer women a safe space to talk about the unlovely—and bring warmth to that; maybe even to reclaim some of those spaces that have been lost to us as women.”

Advocating for women also means fighting on behalf of her profession, which is largely female, and long has been mired in turf wars with those who seek to obstruct midwives from fully practicing and using their skills to the max. There’s an urgent need, she says, for politically savvy midwives to confront stubborn professional roadblocks by moving into spaces that are outside the clinic and labor setting and occupying regulatory spaces where scopes of practice and legal rights are determined.

“My push,” she says, “is for qualified midwives to be more involved in program planning, design and implementation.”

A fellow of the American College of Nurse-Midwives and representative of the North America/Caribbean region on the ICM board, Hardtman balances her time between sitting at the bedside with women, strategizing about how to move her profession forward, and speaking out about compensation, working conditions, and integration into the prevailing medicalized system. The ages-old profession of midwifery is changing, she says, and will continue to evolve as science marries the art of the practice.

Still, at its core is a simple and pure act, Hardtman contends: “Being present, being in that quiet space with women and families, being the keeper of secrets.”

Maryalice Yakutchik is the communications manager for Jhpiego.