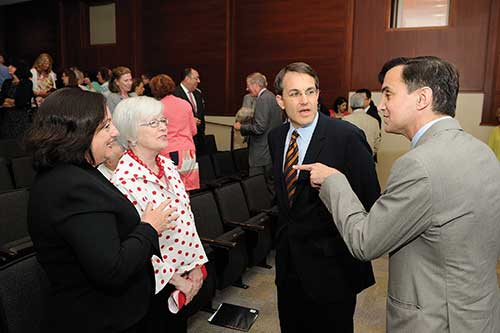 Editor’s Note: The following is the text of Johns Hopkins University President Ronald J. Daniels’ announcement naming the new dean of the School of Nursing.

Our School of Nursing has recorded extraordinary accomplishments in the scant three decades since its inception as the eighth division of the University. It has grown remarkably in size, scope and stature. Today, it is a national leader in education, in research, in promoting health care for underserved populations locally and globally, and in advancing the profession of nursing.

The school’s success is a credit to the dedication and accomplishment of its faculty and staff, to the energy of its students, to the loyalty of its alumni and other supporters, and–very significantly–to outstanding leadership. The critical role of the school’s first three deans in the school’s upward trajectory underscores the importance of the choice of the fourth.

I am, therefore, delighted to report that the Executive Committee of the Board of Trustees has, on my recommendation and that of Interim Provost Jonathan A. Bagger, appointed Patricia M. Davidson as the next dean of the School of Nursing. The appointment will take effect September 1.

Dr. Davidson is a global pioneer in the improvement of cardiac health for women and indigenous populations. She is a passionate teacher, a valued mentor and–as counsel general of the International Council on Women’s Health Issues–a world leader in her field.

She is no stranger to Johns Hopkins: She has been involved in collaborative research, teaching, and professional activities with the School of Nursing for a decade and served as a visiting scholar here in 2007, 2009, and 2011. She has also worked with colleagues at Penn, UCSF, Duke, and Michigan and is a fellow of the American Heart Association and the Australian College of Nursing.

For nearly a decade, much of Dr. Davidson’s work has centered on improving cardiac rehabilitation for women. She has expanded her program to focus on the needs of Australian aboriginal and other indigenous peoples, the disadvantaged, and culturally and linguistically diverse communities.

Our dean-elect is also deeply committed to interdisciplinary collaboration, and has partnered extensively and effectively with colleagues from medicine, public health, psychology, sociology, engineering, pharmacy, and law, among other fields. She is intimately familiar with the demands and joys of clinical practice nursing, the focus of most of the first 23 years of her career before she became a full-time academic nurse-scientist in 2003.

Trish is visionary, engaging, energetic and articulate. She is a builder and a doer. She is an award-winning scientist and educator with important ideas for the future of health care and nursing. She will be an innovative dean and a formidable university citizen.

My thanks to Interim Provost Bagger and all the members of the search committee; they worked diligently to bring this process to such a successful conclusion. Deep, deep thanks as well to Martha Hill, who has agreed to extend her exceptionally successful deanship by a few months until her successor arrives.

Please join me in welcoming Trish Davidson to our community, and also in a warm reception for her husband, attorney Michael John McGrath, and adult children, Sarah and Christopher.