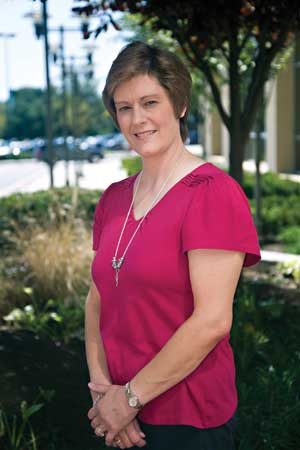 ICU Nurse to the Rescue

Ann Chopack, RN, an ICU nurse and member of the Howard County General Hospital staff for 25 years, has been an Advanced Cardiac Life Support Instructor since 2007. Throughout her career and while on duty she has administered CPR/ACLS to more hospital patients than she can count. But that fateful August morning while traveling along I-70 was the first time she had rescued an infant.

The day began inauspiciously enough. Ann was helping her son, Justin, take his belongings back to Penn State; they were driving separately. The only passenger in Ann’s car was her dog Sable. Up ahead a vehicle had pulled off on the shoulder of the road. A young woman standing beside the car was crying hysterically and waving her arms in distress, Ann recalls. She noticed what appeared to be the legs of an adult hanging out of the rear back seat.

“I wondered if they needed help and if I should stop,” she said.  It’s a good thing she did.

A baby girl in the car, “was blue, not moving, and had no muscle tone,” Ann said. The baby’s father was on the phone with a 911 dispatcher who was giving him instructions to perform CPR, but he was very distraught and appeared unable to render any kind of CPR, she said. After the father indicated he needed assistance, Ann picked up the baby and did a quick assessment. She realized the baby was in cardio-pulmonary arrest and knew there was a narrow window of opportunity to resuscitate.

“I immediately started administering CPR with chest compressions and attempts to clear her airway,” Ann said.  “After several cycles of CPR, the baby’s fingers started to pink up and she opened her beautiful blue eyes. It was a miracle.”

About 11 minutes later, an EMS crew from the Westview Fire Station arrived with paramedics, fire and rescue squads from the Baltimore County Fire Department as well as police. “I was so focused I didn’t hear them,” Ann said. Subsequently, the paramedics took the baby and her family to a nearby hospital, where the nine-month-old girl was treated and later released.

The Howard County General ICU nurse came away from this experience with a profound respect and appreciation for local fire and rescue squads. “When our patients suffer a cardio-pulmonary arrest, I have monitors, equipment, support. There (on the side of the road) I had nothing,” she said. “First responders never know what they’re going to find and have to be prepared for anything.”

The appreciation was mutual. The Westview EMS crew nominated Ann for a Citizen’s Commendation Award from the Baltimore County Fire Department for “saving or attempting to save a person from death or serious injury, from fire or accident with some moderate or minimal risk to themselves.”

“Without question, the outcome could have been tragic without Ms. Ann Chopack’s intervention,” said Fire Chief John J. Hohman during the awards ceremony on March 22, 2011 at Goucher College.