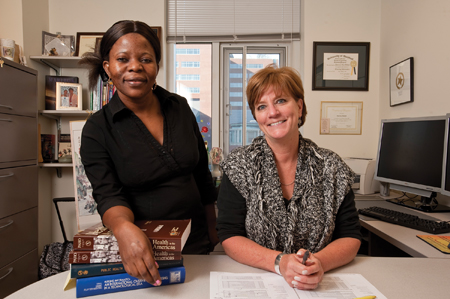 An Overseas Friendship Develops From a Passion for Nursing

Clementina Tirani’s journey toward a nursing degree began with an email.

Tirani had been working as a diploma nurse in an HIV/AIDS clinic run by the Tanzanian Ministry of Health for several years, hoping to one day earn a formal nursing degree. In 2007 she attended a global health forum in Kampala hosted by the World Health Organization. She continued receiving mail from the organization after the event, including information from the WHO’s Global Alliance for Nursing and Midwifery (GANM), run by faculty member Patricia Abbott, PhD, RN.

The nursing shortage in Africa is acute, and the hurdles to receiving a formal education are daunting. Tirani had been struggling to earn her formal nursing degree in Tanzania for years before she attended the forum. Determined to find a nursing program, she contacted Abbott after reading some of the information about GANM.

Abbott and Tirani exchanged emails for three years and developed a close relationship. Abbott and her husband even helped replace the roof on Tirani’s family home after a major flood. “She is my everything,” Tirani says.

“It was pathetic to me that Africa needs so many nurses, but the incredible barriers prevent those who wish to train up to do so. Her plight is one that many nurses in Africa face and continues to add to [the continent’s] huge problems with health,” Abbott explains.

During her struggle to find a nursing program, Tirani became so frustrated that she considered leaving nursing to pursue a career in social work—a degree that’s easier to obtain in Tanzania. Abbott counseled her to stick with nursing. “I told her, ‘Tanzania needs you!’” Abbott says.

Finally, in early 2010 Tirani received an offer to study nursing at Ohio Valley University (OVU) in Vienna, W.V. After arriving at OVU in September, she contacted Abbott to let her know.

The two women met for the first time on the eve of Thanksgiving. Abbott invited Tirani to spend the holiday with her family. They capped off the visit with a trip to Washington, D.C.

Tirani is currently completing prerequisite courses before pursuing a bachelor’s degree in nursing. She then hopes to earn a master’s degree and “Go home to save my people.”

Abbott says, “Clementina is a determined woman. She wants the advanced education and will do what it takes to get it. She’s an inspiration to me.”