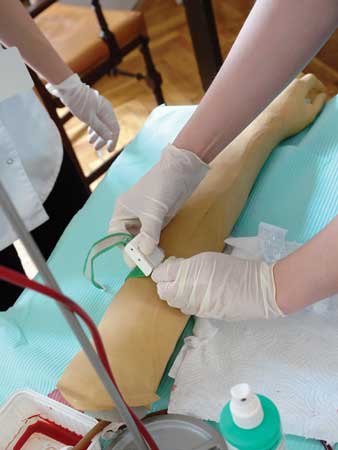 When Debbie Fleischmann, MPA, BS, RN, NEA-BC, became Director of Clinical Education at Howard County General Hospital two years ago, the hospital, she recalls, was “not immune to budget difficulties.” But having worked at Howard for 20 years, she knew where to scale back. The nurses’ eight-hour clinical updates, for instance, bore overtime and replacement costs and were “dissatisfying” for many. “They provided general-education needs, but specific needs, for specialty units, were not being met. So we decided to go with a different model.” 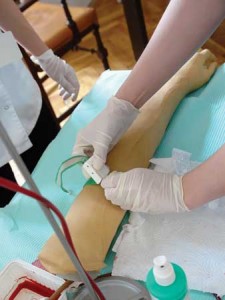 Two, actually—and they were tested, with positive results, on nurses and patient-care technicians this past fall. “With eight-hour days, you had tons of subjects in that period. It was just too much information and really draining,” says Kim Moore, an obstetrics RN specializing in labor-and-delivery. “The shorter sessions are focused on specific skills, and, since the groups are smaller, it’s more efficient. Everybody got more out of them.”

During the OB sessions, which took place in October, three stations—for mock codes, safe-body mechanics, and postpartum hemorrhaging—were set up in hospital conference rooms. Each was supervised by two instructors, who ran groups of three to four nurses through 40-minute exercises, with enough time for feedback and remediation, if needed. “We eliminated the lecture time and focused on skills nurses needed to practice and get a straight competency in,” explains Fleischmann. “And so we condensed that down to just under two hours.”

The tech model was set up differently. Once again, three skills were chosen—safe lifting, Foley catheterization, and IV phlebotomy—only they were spread out over the months of October, November, and December. During five-day “marathon” sessions, each of the hospital’s 175 techs was given 30 minutes to demonstrate competency, after having been provided preparation materials via the hospital intranet, according to Fleischmann. This meant the techs were only off the floor for 30 minutes at a time; whereas the 100 OB nurses either had to be covered for two hours or come in on, and thus get paid for, days off. Ironically, the biggest challenge was ensuring the techs could squeeze in the 30 minutes.

In early 2011 hospital administrators will evaluate the results, then decide whether the OB or tech model will work best for other units. “We may even use a combination of both,” says Fleischmann.

Regardless, nurses like Moore, who enjoyed working with a small team that received useful feedback from instructors, found much to praise. “What we really liked,” she says, “is the stations were run by co-workers. They’re actual nurses practicing with us, as opposed to outsiders coming in. So it meant more to us, that they knew where we’re coming from.”