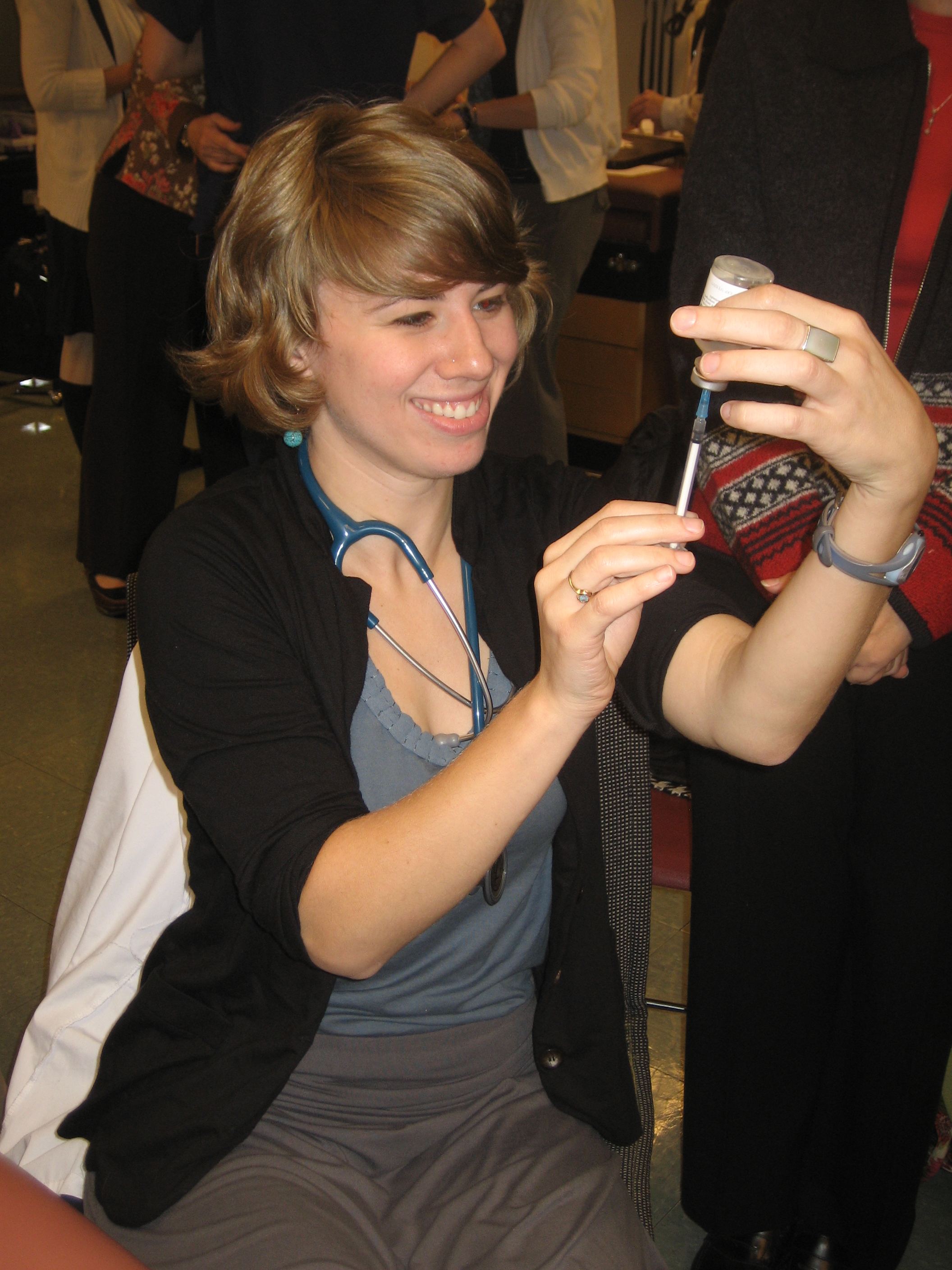 The other day in lab I got a little inspired.  I realized that certain things amuse me now, certain things stick out at me more and overall I judge people differently. Er, I don’t judge, I mean … classify.  Basically, since starting nursing school I constantly find myself scrutinizing others while in line buying groceries or when I take the subway to school.  I think, “Oh … wait, is that clubbing I see? Does that person have poor oxygenation or some other illness? Hmm, is that a birthmark or a mole? And is it raised? Symmetrical?”

The reason I was inspired in lab the other day was because we learned how to give injections! Yes, the moment I’ve been waiting for.  See, I don’t know why sticking a needle in someone seems so exciting, but I think it’s just the fact that technically you need a license to do that and in less than two years I’ll be that person!  We all just felt so … nursey 🙂 (Not my word choice. One of our lab instructors said it).

Anyways, so we started by practicing on rolled-up pieces of ace bandages (for intramuscular injections) and then we moved on to fake limbs.  In the final room my lab group went to, we learned how to give an intradermal injection on a fake arm and then we were allowed to practice on ourselves.  The only thing that would have made it more exciting would have been if we had been able to give each other injections.  But, I guess that involves too many rules and regulations and could become a bloody mess.  Pun intended.  OK, so I hope you enjoy the following pictures of some of my classmates learning how to stick themselves.

I wrote the above part earlier this weekend, but didn’t post it right away. And now, another day in school has passed, which means more to share.  For whatever reason the week before Thanksgiving we are learning all about catheters, ostomies, the genitourinary system and all that good stuff.  Just what I want to be thinking about before I go and stuff myself next Thursday (apologies to my one roommate who doesn’t like when I refer to Thanksgiving as “stuffing myself.” But it seems appropriate terminology for the holiday).

Anyways, I just wanted to share how each week just gets more interesting!  Today I was the example in class on how to give an enema (G-rated) so I guess what I’m saying is … if we’ve already learned about the pathophysiology of our bodies on the inside and now we’re talking about elimination … we must be nearing the end of the semester!   (Can you tell I’m ready for the end of the semester?).