In times of economic crisis and low vacancy rates, Hopkins is reaching out to new nurses

The recession won’t last forever, nor will the hospital’s nonexistent vacancy rate, says Karen Haller, PhD, RN, vice president for nursing and patient care services. Even in the current downturn jobs exist, Haller says, but nurses won’t have their pick. Her mantra for one and all: “Get your foot in the door.”

For new nursing graduates, the recession means that they are going to have to look harder, longer, and maybe cast their nets wider when hunting for a job, says Haller. 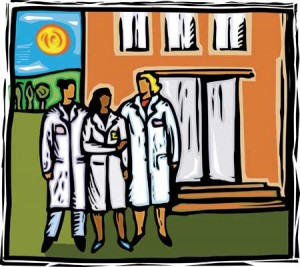 Throughout the hospital, important allies are finding ways to employ as many new nurses as possible. Nursing leadership, for example, revised a rule to allow grads with Certified Nursing Assistant (CNA) credentials to keep the clinical associate jobs they held as students while waiting for RN jobs to open up.

Karen Davis, MSN ’94, nursing director for the Department of Medicine, took advantage of the rule change to hire several new grads in CNA positions so they’ll be in line for part-time RN openings. “They’re already here, and can transfer over time into RN positions,” Davis says. “That way it’s seamless.”

The revised policy allowed Allison Murter, MSN ’04, RN, nurse manager for the bone marrow transplant unit on Weinberg 5B, to offer a CNA job to Pete Meagher, an eager new nursing graduate. She reached him in Boston where he was interviewing at another hospital. Pete said, “I’m coming back; I’ll take it,” Murter recalls.

Meagher has already passed the nursing board exams, but started work as a CNA on June 1. “He was holding out for this unit which was phenomenal and makes me very proud,” Murter says. She has also hired another grad in a CNA position who is preparing for her boards.

The new Oncology Functional Unit Nurse Team, established by Suzanne Cowperthwaite, MSN ’08, RN, is a flexible team willing to cover weekend shifts as well as for sick calls and medical leaves of absence on oncology inpatient and outpatient units.  The team frees up other nursing staff to precept novices, says the assistant director of nursing in the department of oncology.

“We love to hire nursing students we know and have been on our units,” Cowperthwaite says. “You know what they’re capable of, and they can have an easier transition into the role.”

Another job creation strategy requires a “divide and multiply” approach. “Every time I get a resignation now, I take that position and cut it in half and make it into two part-time positions,” says Joan Diamond, MSN, RN, a nurse manager in obstetrics. That way, “the nurses get their foot in the door and there are always opportunities for overtime,” Diamond says. “I want to support as many new grads as I can.”

Sherri Jones, MSN ’09, RN, coordinator of nursing programs for the department of surgery, and nurse managers remained committed to new grads although all positions were filled throughout the department. “We decided, ‘Let’s continue to finish interviewing and ask grads if they’d like to be a part of a waitlist.’” Jones and her colleagues drafted a letter to the select few who made the waitlist promising to stay in touch.

The waitlist has been a good confidence builder, Jones says. “We built a lot of trust, and the interviewees felt wanted.”

And sooner than Jones anticipated, the waitlist came in handy: “Come to find out, about four units have had openings.”