When staff at Howard County General Hospital noted a steady increase in the number of patients with Methicillin-resistant Staphylococcus aureus (MRSA), they pulled together a team to slow the antibiotic-resistant bacteria.

Their screening program, which began in February 2007, was launched on the hospital’s 16-bed intensive care unit where many patients, especially those who are elderly and transferred from nursing homes, are considered at high risk of infection from MRSA.

Infection control manager Barbara O’Connor, who facilitated the team of nurses and physicians, says the mission was straightforward: Identify patients colonized with MRSA-those who are not sick and show no symptoms but carry the germ-and implement precautions to prevent those patients from transmitting it to others. 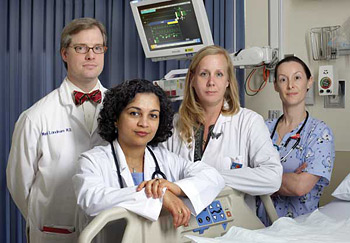 To screen patients, nurses swab each nostril of the patient’s nose. Specimens are then sent to Hopkins Hospital’s microbiology laboratory for testing. Patients are monitored weekly after the initial screen to ensure they have not contracted MRSA during their stay. Those found to have MRSA are placed on precautions, and bright colored signs are posted outside their rooms to alert health care workers and visitors to take precautions before entering.

Results from the screening program during the first 10 months were dramatic. Although HCGH’s ICU-acquired rate for MRSA was below the national benchmark, the program reduced the unit’s rate by more than half, to about 0.7 cases per 100 admissions. In addition, for the first time since 2004, MRSA is a significantly lower percentage of the hospital’s total Staph infections.

“Before we began doing this, more than half of MRSA cases went undetected,” says O’Connor. “Although the program is based in ICU, it’s impacted the entire hospital.”

The team’s results were so striking, in fact, that the project captured the hospital’s Tim Kelly Award for Quality and Excellence. In addition, O’Connor presented the initiative at the annual Maryland Patient Safety Conference in Baltimore in March.

At a time when state legislators and health officials continue to debate whether to require MRSA testing in all Maryland hospitals, O’Connor says HCGH is working to expand the screening program unit by unit, as training and resources catch up. The 30-bed oncology unit is next.