Serendipity, n. A seeming gift for finding something good accidentally.

Serendipity is what led to the interview of Mr. George Riepe that appears in this issue of Church Notes. I hope you all enjoy the interview, conducted by Daria Malan ’75, and will take the opportunity to welcome Mr. Riepe as our guest at Homecoming 2008.

In the spring of 2007, I was caring for an ill patient in her home, and she asked me to assist her in opening her mail. I gasped as I opened a greeting card and saw that it was from Mr. George Riepe. After all, this man’s name was on my CHH diploma! The patient remarked that Mr. Riepe was both a friend and a neighbor. Indeed, I wanted to walk up the street that night, knock on the door, and introduce myself.

Instead, I waited until morning and contacted Lisa O’Shea at the Johns Hopkins University School of Nursing. The pursuit for funding of scholarships, the preservation of the CHH archives, and naming opportunities in the future School of Nursing building are always on my mind, and it was beyond exciting to think that I had come upon someone who could be instrumental for these endeavors. I knew that as the former President of the Board of Trustees for CHH, Mr. Riepe would be an excellent resource.

To say that Mr. Riepe was instrumental is an understatement. Mr. Riepe worked to draft a proposal to MedStar, the purchaser of Church Hospital in 1997. The efforts were well worth it when we received a $100,000 donation from MedStar to add to the existing Freda Creutzburg Scholarship in memory of the Church Home and Hospital School of Nursing. That scholarship, now valued at over $227,300, continues to support students who want to be nurses and need our help.
Forrest Gump’s mother always said, “Life was like a box of chocolates, you never know what you’re going to get.” Likewise, when someone asks you to open their mail, do it. You never know whom you might meet. This is serendipity at its best!

Thanks to Jane Rosser Grabner ’64 for her donation of a 1964 class photo. It is in excellent condition and is in color! I want to also thank Doris Murphy Lytle ’45 for the lending of her class photo for digital copying. These items will now become part of the Church Home & Hospital School of Nursing collection housed at the Alan Mason Chesney Medical Archives. Thank You, Doris and Jane.
To complete the CHH collection, we need yearbooks (1961, 1962, & 1963) and class pictures (1965, 1967, 1969, 1970, & 1971). Please consider donating to the Archives or lending your photos to be digitally copied.

Chart One Storage in Jessup is now under new management and has a new name: Quinlan Storage. The Church Home records are still there, and Aniese Gentry is still the contact person, but the phone number has been changed to 888-416-5353 (ext. 7550 or 3907).

Homecoming 2008 will be a wonderful time for JHU and CHH nursing alumni. Included in this year’s plans is an opportunity for each group of alumni to sing their school song. I will have copies of “The Alma Mater” in case you have forgotten the words to this beautiful song written by Rosemary Ellis Scholtz, ’55 and sung to the tune of “The Hymn from Finlandia” by Jan Sibelius. Let us all hope that either Yetive Habicht or Donna Swope can attend to lead us.

Be sure to save the dates of September 26-27, 2008 for a weekend of nostalgia and fun. Please try to attend as many of the events as possible. Your invitation will be arriving shortly. Gil Whedbee, former President of Church Home and Hospital, and George Riepe, Former Chairman of the Board of Trustees for Church Home, will both be attending the Saturday luncheon as honored guests. 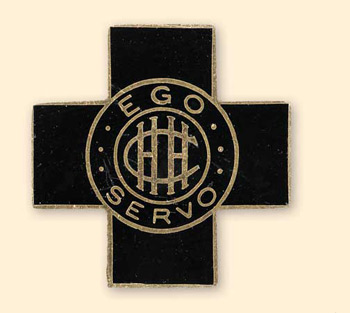 Class of ’58 Planning for ’08 Celebration

Phyllis Abendschoen ’58 is very excited about the upcoming 50th celebration for her class. Thanks to Phyllis for sending in an updated class list that has been put into the Hopkins database. I look forward to putting beads on all of the “Golden Girls” of ’58. We still need addresses for five classmates: Agnes Marshall, Skipper Shirley Korschgen, Lauren Ide, Sue Green and Joy Davis. If you know how to get in touch with any of them, please call Phyllis at her home, 410-744-1312. 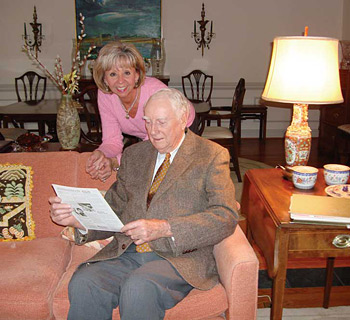 In February 2008, a $100,000 donation was made to the Freda L. Creutzburg Memorial Scholarship in honor of the Church Home and Hospital (CHH) School of Nursing. This generous donation raises our fund to $227,300. Interest from the endowed scholarship is awarded to worthy nursing school students at the Johns Hopkins University School of Nursing (JHUSON), serving as a prestigious legacy of the CHH name by furthering nursing education.

Last fall, Mr. George Riepe, the former President of the Board of Trustees at CHH submitted a proposal for the donation from MedStar. Mr. Riepe spearheaded the initiative and worked tirelessly with his six-member board on our behalf, until a decision was reached five months later to grant the $100,000 donation.

When I learned the news, I knew I had to meet George and thank him myself. After serving as the Scholarship Liaison on the CHH Alumni Association, I have been fortunate enough to witness how scholarship monies shape the career path of future nurses. George welcomed me into his beautiful home in Lutherville, Maryland on March 13th. He is a gracious and engaging gentleman who prefers not to be the center of attention. Nonetheless, I arrived only to see that he had pulled out his file of CHH memories that included newsletters, annual reports, and newspaper clippings about the closure of the hospital.

It was easy to see that George was proud and sentimental about his 37-year association with Church Home and Hospital. He has lots of interesting stories that took us both on a walk down memory lane. I want to share with you some of our conversation:

Q: Describe your position on the Board of Trustees at Church Home and Hospital.
A: I was first on the Advisory Board of CHH from 1962 to 1967. Then I became a member of the CHH Board of Directors in 1967. I became President of the Board in 1973 and served for 25 years in that capacity.

Q: What were some of your stand-out activities as President of the Board of CHH?
A: On my watch, we acquired land on the south side of the hospital and built a professional office building for the doctors. We replaced the annex and nursing school dormitory with a new building that offered patients a new ICU, CCU, laboratory and dialysis unit. The space that was the nursing school dormitory was converted to The Home so it could be maintained as its own entity. In addition, a large much-needed multi-story garage was built. All of this growth greatly contributed to the hospital’s success.

Q: What are your fondest memories of Church Home?
A: I was born at Church Home Infirmary in 1921. But mostly I remember that the nurses at Church Home and Hospital were great! I felt they deserved much more recognition than they received, mostly for their skill and hard work. I never met one who wasn’t pleasant to patients and a great pleasure to know.

Q: What did you enjoy the most at Church Home?
A: I really enjoyed being a part of the inner workings of the hospital. And working with the medical staff, Gil Whedbee, and James Bobb was a great opportunity for me.

Q: How did you become active in health care?
A: My first exposure to health care was working with the Family & Children’s Society for 12 years, followed by my service to CHH.

Q: Are there any nurses in your family?
A: No, but Dr. Jack Zimmerman was a good friend, and I thought he was always trying to be helpful to our CHH nurses. He thought the world of them!

Q: Was there a special connection between you and CHH nurses? Describe that connection.
A: Well, I was never a patient at CHH, but I really enjoyed my relationship with our Directors of Nursing. George Mason, Joyce O’Shea, and Anne Failing are especially memorable for me.

George gave up his 108-acre farm, complete with cattle, where he lived for 30 years with his wife, Frances. He has three children, four grandchildren, and one great-grandson. At age 70, he retired as the President of Warner-Graham Chemical Company in Cockeysville. His grandson is the president of the company, now a fourth-generation family business.

George is an impressive 86 year old whose vitality and sense of pride are readily evident. He stays active as the President of the Brightwood Club Association Board of Directors and serves as an Emeritus Trustee of The Boys’ Latin School of Maryland. He also pays a visit to his fitness center three times per week!

On behalf of Church Home, I’d like to extend my utmost gratitude for his leadership that resulted in a significant contribution to future nurses at Johns Hopkins.