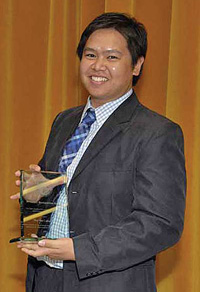 On May 2, 2007, Marlon Caballero ’08 became the first nursing student to receive the Diversity Recognition Award from the Johns Hopkins Institutions Diversity Leadership Council.

A new student organization, Nursing Students United for Advocacy and Action, was formed in October 2006 under Caballero’s leadership and has planned events for World AIDS Day, sponsored a weeklong celebration of diversity, and raised money for charities such as the House of Ruth and the Helping Up Mission.

The Diversity Recognition Award, given in recognition of outstanding contributions to diversity supporting the Johns Hopkins legacy of excellence, was implemented in 2003 by the Diversity Leadership Council.