Provost’s Awards Offer Rich Opportunity for Research Corrie Ann McKeen holds more than a theoretical interest in her studies at the School of Nursing. Having closely known a survivor of abuse and subsequent fibromyalgia, a disorder characterized by muscle pain and fatigue, McKeen was fascinated to learn that victims of intimate partner violence often experience the long-term symptoms of pain, fatigue, and depression. 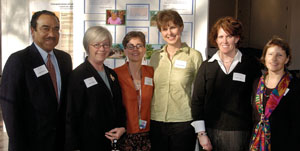 “I had to learn more,” says McKeen. “Of course my history sparked intellectual curiosity, but my volunteer work at the Family StressLine, a Baltimore-based crisis hot-line, also showed me the import-ance of helping victims of violence.”

McKeen and fellow nursing student Kaitlin Haws were named recipients of the Provost’s Undergraduate Research Awards in 2005. The awards, given annually by Johns Hopkins University to encourage baccalaureate students to engage in research activity, allowed Haws and McKeen to work with faculty mentors to tune their skills in proposal writing, carrying out a research project, and reporting results.

Under the guidance of nursing faculty member Nancy Woods, PhD, CNM, and in collaboration with professor Gayle Page, DNSc, RN, FAAN, McKeen’s research focused on under-standing the biological mechanism that causes the “sickness behavior symptoms” of pain, fatigue, and depression. Using detailed interview data and blood samples that had been collected from more than 100 women at a primary care clinic for the uninsured in Baltimore, McKeen was able to determine that women with a history of intimate partner violence reported a greater prevalence of the “sickness behavior symptoms.”

But more importantly, she found that the women with these symptoms have higher levels of inflammatory cytokines—the “messengers” used by white blood cells to communicate with one another that can induce profound psychological and behavioral changes—specifically tumor necrosis factor (TNF). Says McKeen: “Ours was the first study to uncover this biological mechanism through which violence affects physical and mental health.”

Kaitlin Haws conducted her research in Haiti with professor Elizabeth Sloand, MSN, RN, CPNP, during the January interim break. The duo traveled to Carrefour Prince to study the causes of child mortality in the rural village. To gather data, Haws worked closely with the Haitian Health Foundation (HHF), which provides care to residents of at least 100 surrounding villages.

HHF Director Bette Gebrian, an MPH graduate of Johns Hopkins University, granted Haws access to the HHF database that has been built over the years with information gathered by village health agents. The access enabled Haws to obtain the names and medical history of all the children who had died in Carrefour Prince since 1986. She then traveled—with a translator—to a women’s club meeting in the small village to interview some of the mothers and grandmothers who had lost a child in the past 20 years.

Haws determined that pneumonia and diarrheal disease are the two most common causes of death for children in the area. “We suspect that many of these children had HIV,” says Haws, “but that cannot be tested or confirmed.” As of 1999, AIDS was the leading cause of death in Haiti; by 2002, an estimated six percent of the country’s adults were infected with HIV.

The duo also determined malnutrition to be a factor in child mortality. “This descriptive study is only the first step to fully understanding the implications of child mortality in this region of Haiti,” says Haws.

Both students presented their findings at a Provost Award Reception in March, and McKeen presented her findings at the Association of Women’s Health, Obstetric, and Neonatal Nurses (AWHONN) 2006 Convention in June.