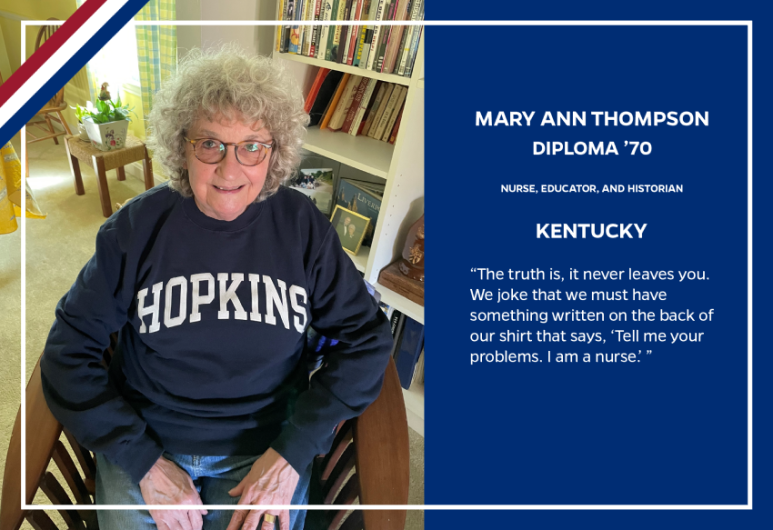 It was 1918, and a flu pandemic was tearing through the U.S. military as World War I raged in Europe. There was no effective medical treatment available for flu; there were no antibiotics. Despite pleas from the Surgeon General, U.S. leadership refused to halt troop movement to stop the spread. There was a war to fight.

Some 43,000 military personnel perished; 675,000 Americans in all died from the flu (though the final toll remains a guess—death reports were voluntary and then, as now, there were reasons to fudge the numbers). “When the pandemic was finished, they wanted to play it down,” says Mary Ann Thompson, co-author with Sara Bolten of the article “They Buckled on the Armor of God: Kentucky Catholic Sister ‘Nurses’ in the 1918 Flu Pandemic,” a look at the caring performed by the Catholic Sisters at Camp Zachary Taylor in Louisville.

“Medicine had been a failure—it had nothing to offer” against the raging flu, explains Thompson. There would be no vaccine, no cure, and this was not something the medical profession or the government wanted to broadcast. Any success against the disease came from nurses and volunteer caregivers like the Catholic Sisters. “Thank goodness for the nurses and the nuns. They were really trying to help, and they did.”

Fast forward to 2020, and the COVID outbreak, which would easily surpass the 1918 flu’s death toll in the U.S. “Medicine did eventually get it right this time with the vaccines,” says Thompson, whose frustration comes more from the perspective of public health, in which she holds a doctorate. With 100-plus years to learn from that pandemic, why weren’t the nation’s leaders a step ahead? (“Woodrow Wilson wasn’t that great in 1918 either,” Thompson admits. “He was focused on the war.”)

Mostly, though: “Why aren’t people getting vaccinated?” she thought as proven, life-saving medicines were presented—for free—to an oddly skeptical U.S. population. “I lived through polio. Parents couldn’t wait to get their children vaccinated.”

It strikes her now that we might have guessed the anti-vaxx response: “The whole social situation has changed. People in 1918, if the government said, ‘Stay inside your house,’ they would do it. People today are more rebellious.”

Thompson is proud of her research, getting the prescient article published, and presenting on the work behind it at several events. She’s also thrilled to continue using her nursing skills. “The truth is, it never leaves you,” she says of her nurse training at Johns Hopkins and elsewhere. “We joke that we must have something written on the back of our shirt that says, ‘Tell me your problems. I am a nurse.’ Nurses have such wonderful listening and responsive skills.”

Mary Ann Thompson, left, at a 2022 reunion, says classmates sweated out the program’s tough grading together. Thus the jokey T-shirts she had made.

These days, she uses these skills and more as a standardized patient for the new simulation program for nursing students at Bellarmine University in Louisville. Thompson taught there until 2014, and is glad to be able to educate students once again. “I’m good at it, and I no longer have to grade papers or exams.”

And this “patient” is no dummy, offering on-the-spot insights, critiques, and mentoring. “I have a little more to offer.” — Steve St. Angelo