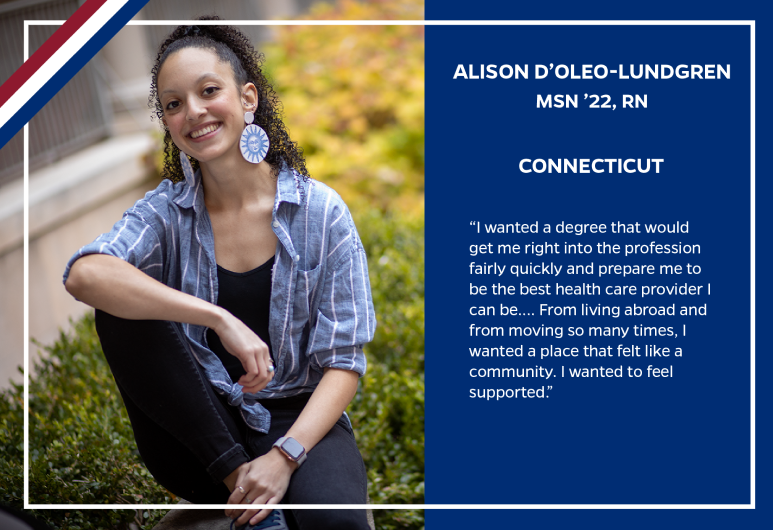 Half the battle is just showing up, being open, and trying to make a difference. The rest? Alison D’Oleo-Lundgren will figure that part out as she goes: from East Hartford, CT, to Valencia, Spain, to Boston, MA, to Guayaquil, Ecuador with the Peace Corps, and now to East Baltimore, MD. “I’m adaptable, with support,” she says of her journey to … whatever awaits her out there.

Take the Peace Corps. It transports volunteers to places they’ve very likely never been before, and may never see again. Memories of the work that volunteers do to support existing local organizations outside the U.S. tend to stay with a returned Peace Corps volunteer (RPCV). But the sensory experiences of becoming part of these communities and families—a happy tradeoff for their service—can fade over time. And of course, beautiful, fresh memories and stories can inspire future volunteers.

So the organization suggests taking pictures, and especially videos. And it works, says D’Oleo-Lundgren, who spent her 2017-19 tour in and around Guayaquil, Ecuador’s largest city. When she watches her own videos taken from a balcony above the bustling coastal city: “I can almost feel the warmth and the humidity and hear the sounds … like New York City times 10—lots of beeping of cars, lots of yelling and shouting, not in an aggressive way but a ‘Hey, we know each other here’ way.”

She can even taste the encebollado, a fish soup of tuna and pickled onions often served with fried plantains, hot sauces, and mustard as a breakfast staple. D’Oleo-Lundgren initially recoiled at the idea of soup in the morning, then adapted, saved up all week to enjoy the $4 delicacy on weekends, and still dreams of the stuff.

She doesn’t necessarily need video remembrances of the people she got to know so well, the high schoolers to whom she taught sex ed or the sex workers who she helped stay safe and HIV-compliant, as required by local law. (That might be one of those former high schoolers on the phone with her right now. “They were so great. I told them they can reach out any time, and they do,” explains D’Oleo-Lundgren.) As a side project, D’Oleo-Lundgren helped lead a more accessible exercise program for Guayaquil’s older folks.

Language was rarely a barrier, aside from initial performance anxiety and a bit of “imposter syndrome,” D’Oleo-Lundgren says. She grew up on colloquial Spanish as well as English, so proper “presentation” Spanish was still a reach. Her parents are divorced, with her father now back in his native Dominican Republic. Her mother at one point moved to Spain, dropping her daughter into a Valencia high school, sink or swim. Her new Valencian friends supported her on the all-Spanish essay tests. She helped them with English tests. Everybody wins. They, too, remain in touch.

As for how she ended up at the Johns Hopkins School of Nursing in January 2021, that too is a happy memory, one that got even better when, to her surprise and delight, D’Oleo-Lundgren was awarded a Gurtler Scholarship, offered to one student per year based on accomplishments achieved—and those yet to come. “It was the best kind of surprise. I will forever be grateful.” (As an RPCV, D’Oleo-Lundgren was also eligible for a Coverdell Fellowship and successfully sought a Fuld Fellowship in patient safety after hearing previous fellows rave about being able to research and actually see their policy changes implemented—on top of the networking opportunities it offers.)

Nursing wasn’t originally in the plan. After high school, D’Oleo-Lundgren headed to Boston University as a pre-med student. “I was doing everything I could to go straight into medical school.” Then, during junior year, she took a class called Reproductive Anthropology. “It changed everything. It completely changed the way I saw reproductive health,” as well as how she wanted to deliver care in this newfound calling, as a nurse rather than as a physician, “to work as directly with people as possible.” And rather than straight to med school, she went straight to the Peace Corps. As in, “I graduated May 21 and was in Ecuador May 31.”

And by the time her Peace Corps tour was up, D’Oleo-Lundgren had a pretty good idea of the next step in her journey, at least the what part. She already had her bachelor’s degree, and didn’t want to mess around. “I wanted a degree that would get me right into the profession fairly quickly and prepare me to be the best health care provider I can be.” The where? “From living abroad and from moving so many times, I wanted a place that felt like a community. I wanted to feel supported.”

COVID had been raging, of course, and nursing schools were forced to close many clinical sites. D’Oleo-Lundgren understood that it was through no fault of their own. “But Hopkins was still going strong,” she says. “And, honestly, during the virtual information sessions, I always, always left feeling like the admissions community genuinely cared about me. They wanted to support you through your application process. They wanted to recruit good nurses. … We didn’t know what 2021 was going to look like, but I knew that my best chances were going to be at Hopkins.”

“I wanted a degree that would get me right into the profession fairly quickly and prepare me to be the best health care provider I can be.”

Today, the Fuld Fellow’s patient-safety project involves both critical care and cultural dexterity of providers. “I just fell into the most perfect project I could have found. … One, I wanted to go into critical care, and now I have two supervisors who are in critical care. And I’m doing work about cultural competency. I come from a background of seeing my father not being able to speak English and needing to get care; people lacking that kind of ability to connect. That’s always what I’ve been interested in. It’s really cool.”

She’s not sure yet where all this leads, but D’Oleo-Lundgren can’t want to find out.

Does she miss Ecuador? She always will. But it calls all the time, and she’s got her videos: “It brings me right back.” — Steve St. Angelo