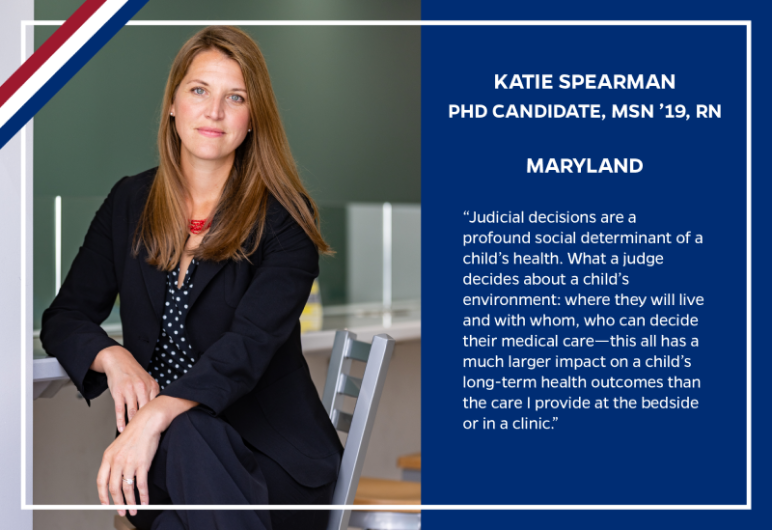 “Judges in the family court system are failing to protect children,” says Spearman, a mother of four young boys who helped push the passage in April of Maryland SB 17, which mandates training for family court judges and magistrates who decide child custody cases involving domestic violence and maltreatment. Maryland was the first state to pass legislation following the re-enactment of VAWA (or Kayden’s Law), which provides federal funding for states that mandate specialized training for judges in family law cases involving domestic violence and child abuse.

In 2019, Spearman was a soon-to-be Master’s Entry grad. Asked as part of her spring classwork to craft an advocacy letter based on a current political question, she chose Maryland SB 567, and particularly the panel—the Workgroup to Study Child Custody Proceedings Involving Child Abuse or Domestic Violence—tasked with shaping and pushing recommendations for reforms through the legislature. Although the workgroup was tasked with incorporating the latest evidence-based research on adverse childhood experiences into its decision-making, the committee completely lacked a health care viewpoint: no nurses, no physicians, no public health professionals.

Spearman started learning, and typing, and building her determination to take action.

“There are so many systemwide blocks to providing safety and health care to children who’ve been abused,” she explains.

After handing in her class work—partly an argument to be added to that work group—she decided to send her pitch directly to Maryland Gov. Larry Hogan.

“Somebody from Governor Hogan’s staff called me and said, “Well, the work group has already been formed. But we’d love to have your input, and we’d love for you to attend these work group meetings. They met in Annapolis and in the State House, and I actually went to almost all of the meetings [virtually during the pandemic] and I was able to have input and meet a lot of the leading experts that had come to testify. And it was really interesting.”

At the same time, Spearman had taken a job as a pediatric nurse at Johns Hopkins Hospital, where children caught in abusive situations can end up. And caring for them, based on the orders of a family court, “was just very complex” and upsetting.

“Judicial decisions are a profound social determinant of a child’s health. What a judge decides about a child’s environment: where they will live and with whom, who can decide their medical care—this all has a much larger impact on a child’s long-term health outcomes than the care I provide at the bedside or in a clinic.”

“It was kind of, ‘Who is deciding what medical care a child gets or not?’ When there’s violence in the family—and in some instances, it seemed as if there was an abusive parent—withholding care that ethically, as a nurse, I thought the child probably should be getting and then other cases, where they were asking for lots of things to be done to the child, where ethically you kind of feel like, ‘We really shouldn’t be doing that intervention.’ ”

“There seemed to be a real lack of understanding of the context and the nuance of domestic violence and inconsistencies in how judges were making their decisions around child custody.”

So, for three years, Spearman worked with Maryland legislators, policy experts, and advocates, and saw the bill pass through both the Maryland Senate and House of Delegates on April 7. Spearman was invited to the signing in Annapolis by Hogan. Today, through Maryland law SB 17, she has hope for change in the system, though she realizes hard work remains. “It’s a first step.” And Spearman will keep pushing as she continues her work toward a PhD at the Johns Hopkins School of Nursing.

She has already learned way too much about adverse childhood experiences, or ACEs for short. “We expect a lot of individuals, and especially children, to be resilient. But as health care professionals, we also have an obligation to address system failures that place children in harm’s way. Legal support is important—but the family court system is a private legal system that requires resources to access. This exacerbates health disparities.”

But what also fascinates Spearman is that, with the right help—and nuanced legal support—even kids subjected to such trauma can indeed bounce back. “So even when they do experience adversity, having a safe and supportive and nurturing relationship re-establishes that sense of safety. It has amazing benefits for a child’s neurodevelopment.”

That, Spearman is determined, will now change as well. — Steve St. Angelo