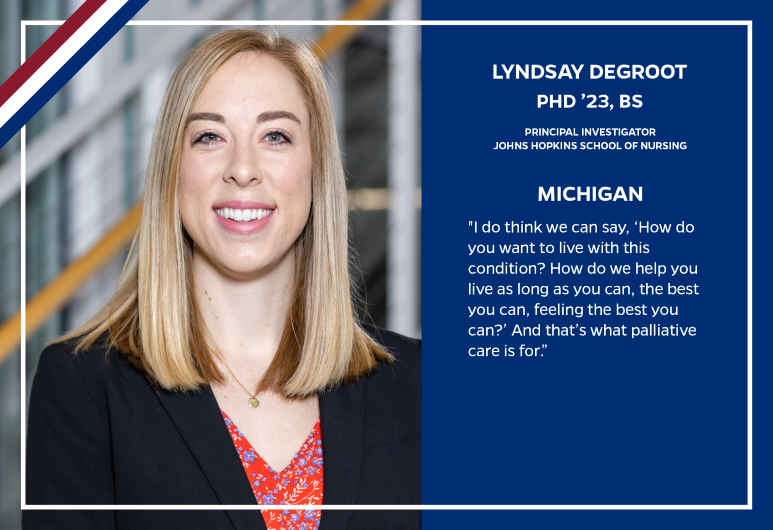 For Lyndsay DeGroot, the ICU wasn’t a calling as it is for many nurses. Rather, it was an epiphany.

“My aunt died of sepsis very suddenly. She was 35. Full organ failure.” The family, knowing DeGroot’s aunt would not want a tracheostomy or to be kept alive through extreme measures, requested that ventilator support be removed. “What an honoring thing to do for someone.”

“I was a freshman in Calvin University in Michigan, brand new, about to start nursing,” DeGroot remembers. “We got to be there in the ICU when she passed. … That was one of the first times I’d ever seen someone die, which is really hard. But also, just watching these nurses—they’d been nurses probably for 20 or 30 years, very seasoned—and they were crying, because they’d gotten so close with my family. They had been doing this for so long and it still impacted them at that level, which was such a beautiful thing.”

But that isn’t what sealed DeGroot’s ICU decision. Three years later, to the day, “My best friend’s mom also died of sepsis. Literally in the exact same place, I got the phone call. … Within a few days she was healthy to—gone.” Again, the patient’s wishes were known and honored and the family treated with empathy and respect. And that aspect has hung with DeGroot ever since.

“I have this empathy for the families,” she explains. “You walk into an ICU and there are the smells, and all the sounds, and all the machines, it’s just really overwhelming. I was in nursing school and it was still a lot to take in. So I have this different level of understanding. When a family would come in for the first time to see their loved one, who’s on a ventilator and everything’s crazy, you’re just, ‘OK, what can I do to explain all of the machines or what you’re smelling or what you’re seeing?’”

What DeGroot was seeing was families paralyzed by decisions, particularly involving older adults with multiple chronic conditions like heart failure. “They’ve had this for many, many years. It wasn’t a car accident or something sudden. And they would be on a ventilator and they would be sedated, and a family member would have to make the call. It was so horrible to watch them go through, ‘I have no idea what they would want.’ Zero clue. … I just kept thinking, ‘Where is palliative care?’”

“I’m just so passionate about, how do we make this more a part of our normal care? Because especially with something like heart failure, COPD, cancer, we’re all human. We know that we’re all going to die at some point. Every conversation doesn’t have to be about death. But I do think we can say, ‘How do you want to live with this condition? How do we help you live as long as you can, the best you can, feeling the best you can?’ And that’s what palliative care is for.”

And this is just inpatient care, DeGroot explains. Palliative care for outpatients? Forget it.

So of course, “literally three years on the dot,” she decided to join the PhD program at the Johns Hopkins School of Nursing to help bedside support teams begin these open conversations with patients about palliative care. But when, and how?

“That’s the million-dollar question,” DeGroot says. “If you’re in a critical care situation, even if you’re not ready, you’ve got to have the conversation because it’s so tenuous you just never know. I’ve had to think a lot more about that when it comes to more routine care, outpatient care, we’re not in the hospital. What I’ve come to find in the research I’ve been doing with my advisor—Martha Abshire, she does a lot of caregiving research—and also with the participants I’ve been working with who have heart failure: Most people have thought about it, at least a little bit. A lot of people are silently worrying about it, or it’s in the back of their brain. But they kind of need permission from someone else to bring it up.”

For some, DeGroot says, decision time comes “if I can’t go fishing anymore, or I couldn’t speak or I couldn’t walk, I can’t recognize my own kids, or I couldn’t wipe my own butt …’ So I try to ground it in, ‘What is quality of life to you?’ A few will go, ‘I’ve got a pulse: quality of life.’ Good for you. We can honor that. But most, no.” And that’s when the conversation begins in earnest.

DeGroot uses the analogy of moving to a brand new city. It takes so much energy just to learn your way around. “Palliative care is coming in like a tour guide. We’re just going to help you navigate this new situation. Because we’ve been there before. … Just bringing it up is stepping into that uncertainty and fear that a lot of people have and giving them permission to stand in that space with someone right there with them.”

Lyndsay DeGroot with twin sister Lauren at Lake Michigan and as nursing colleagues. Her sister is a big reason Lyndsay leans toward staying in Michigan.

As for her own eventual exit from this world, DeGroot is happy to start the conversation right now, as she babysits an English Cream golden retriever and a yellow lab living life to the fullest, wrestling on the floor by her desk on a fall day in Michigan. “When you’re young, it doesn’t feel as real or pressing. But I’ve seen all the potential interventions that can happen, and I know what ones are, like, ‘Absolutely not!’ … I also have a very strong faith, so I’m not afraid of death. I’m 30, and I have a DPOA [durable power of attorney].”

Until then, palliative care research will remain her passion. “I’m a clinician in my soul. I want to be at the bedside. I want to be in the room, having the conversations, being the support person. And as a researcher I’ll never again get to do that the same way. But I hope that if I can champion other people to get to do that in their work, that’s really a purpose-driven life.” — Steve St. Angelo