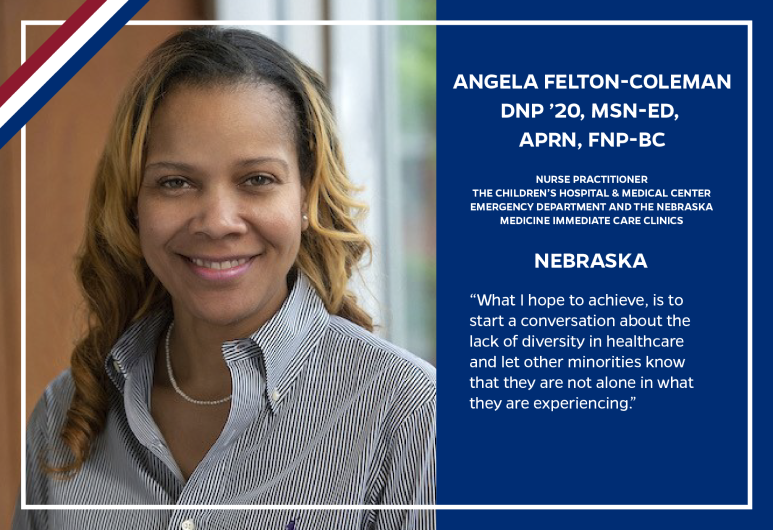 When working in emergency medicine, there is no such thing as a typical day. Dr. Angela Felton-Coleman, DNP, MSN-Ed, APRN, FNP-BC, knows that whenever she steps foot in the emergency department there is no telling what ailments she will be treating.

“My day can run the gamut, from every day, run of the mill cough and cold to CPR actively in progress to expectant mothers in active labor to individuals taking their last breaths.”

As a nurse practitioner in the only full-service hospital in West Omaha, Angela is on the front lines of healthcare in her community. It is up to her to be there when patients need her the most; when they are at their most vulnerable.

But Angela does more than what is written in her job description. Even after 10-hour shifts, Angela volunteers her free time to her community by speaking to youth and young adults and appearing at local health events. During the COVID-19 pandemic, Angela even appeared on CNN to offer insight into how the disease was impacting her community.

The commitment Angela shows to her community is both a product of her upbringing and education. Angela was born and raised in Omaha, Nebraska. She met her husband in high school and has gone on to raise her family there as well.

“People think it’s nothing but farmland, but we have and are so much more than that! we are in the middle of the country, next to a major waterway (the Mighty Missouri River). You really get the best of both worlds: the small town feel within a bigger city.”

Angela’s path to nursing is not necessarily what might be considered the “traditional” path.

“I was already married and had a family when I went through my first 4 years and then each subsequent degree through to my DNP.”

It goes to show that there is no right or wrong time to begin the nursing journey. The call to help can come at any time or from anywhere. What better place to hear the call than in your own community?

Angela’s nursing education at the Johns Hopkins School of Nursing taught her to be aware of the social and environmental aspects that play a role in one’s health. Angela sees these aspects playing out throughout the community, but does not judge based on one’s circumstances.

“The way that I, specifically, address the social determinants of health to advance equitable outcomes for everyone is by doing exactly what I do every day…provide the same level of excellent care to every one of my patients, despite their socioeconomic status.”

On top of her work in the Emergency Department and volunteer efforts, Angela has also gotten into the blog writing space with her blog “The Minority Nurse.” Originally launched in 2009, the blog serves as a place to address the issues surrounding the lack of diversity in healthcare.