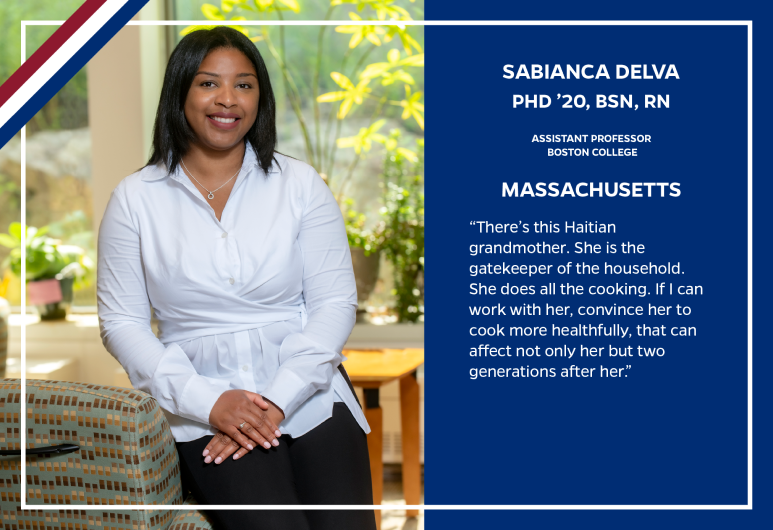 There was never a question that Sabianca Delva would return to Boston once she finished her studies at the Johns Hopkins School of Nursing. After all,

“There is no Haitian food in Baltimore!”

Delva explains that as a Haitian immigrant, whose family arrived in Boston when she was 8, you’re looking at three basic choices if you seek cultural immersion and a full belly: Miami, of course, Brooklyn, NY, and Beantown. Add family, plus a job she loves at Boston College for its access to her community, work-life balance (summers either off or as time to focus on research), and its Jesuit leanings—basically, “take what your passion is and use it in the service of others,” says Delva, a BC alumnus—and she’s home.

But she is grateful for JHSON for helping guide, if not straight shove her toward her spot as a young researcher and faculty member at BC.

“Had I not come to Johns Hopkins, I never would have known what my full potential is,” Delva explains. “Everything that I said that I couldn’t do—I’d never done any grant writing before—the PhD Committee pushed me: ‘No, you can do it.’ And they gave me the support to do it.”

The result was NIH funding in the form of an F31 research grant plus, as a proven grant writer, the opportunity to bypass a postdoc requirement to begin her research career, which she describes as in the “hope” phase.

“I hope to make a significant change in the communities that I work in,” Delva, whose Creole background opens doors, says of marginalized groups simply left out of much research because of a language barrier. “I remove that barrier, and I work to create interventions that are culturally tailored and relevant based on feedback. That’s the only way you’re going to see change, if it’s meaningful to the community.”

For now, she’s appreciating the small victories: “There’s this Haitian grandmother. She is the gatekeeper of the household. She does all the cooking. If I can work with her, convince her to cook more healthfully, that can affect not only her but two generations after her.”

She has also worked with women who have suffered violence, helping them put together a resume, for example. “I was walking toward an elevator one day at Brigham and Women’s Hospital, the doors opened, and there was one of the women I’d worked with. She was now an employee there.”

As for the dream of watching her toddler grow up to speak Creole with her grandmother and aunts, well … “You should see her. She’s like an old woman. She’ll drop something, bend over and pick it up and go, ‘Woy!’ That’s what my mom does. I’ll be like, ‘Come on! You are sooo limber.’ ” — Steve St. Angelo