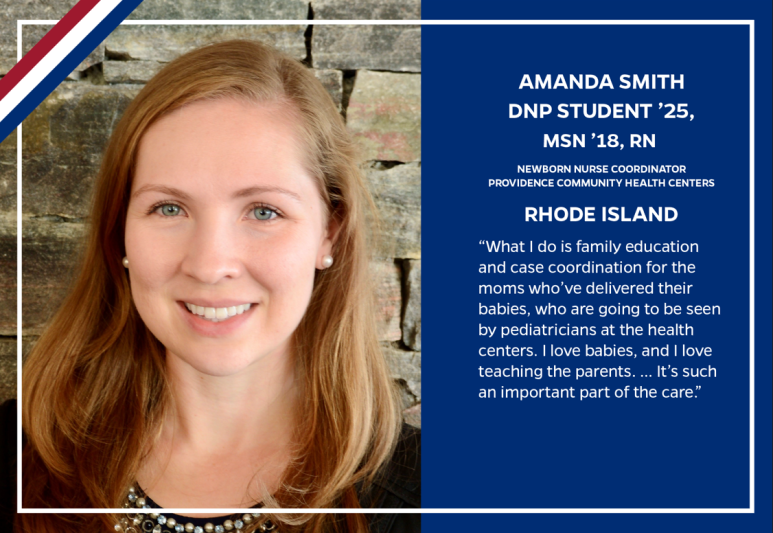 Amanda Smith does not speak Spanish, unlike about 50 percent of the new moms she sees at Women and Infants Hospital in Providence, RI. “There can be this huge language barrier,” she says. But a love of babies is universal, and Smith’s equal affection for educating new parents translates anywhere.

Smith, newborn nurse coordinator for Providence Community Health Centers (PCHC), is essentially the welcoming committee for these newborns as well as a cruise director for new parents. Smith arrives with an easy-to-digest curriculum for the adults. A colleague translates, and Smith has learned enough Spanish by ear to know when all the key points have been hit. She prepares the reports for PCHC pediatricians who will see the newborns in the health centers after they are discharged from the hospital. She digs through the moms’ health charts for any relevant data that might have been missed at the various stages of documentation. And then she puts it all into the electronic health records system. As soon as the next day after birth, the pediatrician has the full report waiting.

It’s not very hands-on. But it’s passionate care nonetheless. “Before, I worked in the neonatal intensive care unit at a hospital in Washington, DC, and I loved taking care of the babies—being more hands-on with them.” But Smith’s hands are kind of … occupied right now. A single mom with a 2-year-old, “I’m working part time because I’m also back in school for the DNP program. This is a great gig for me right now.”

Besides, “such an important part of the care of the babies is bringing parents in and teaching them how to do it.” At Women and Infants, where Smith spends most of her workdays, the language barriers can be combined with socioeconomic and ethnic gaps, as well as those in knowledge on health care. “So when I saw this job posting, and it talked about giving newborn education to the moms and the parents, I already knew that was one of my favorite parts of my previous job, so that was very attractive to me.”

And so the Warwick native came back to a Rhode Island she hadn’t really been part of since she left for college. Some things don’t change. Rather than what high school you went to, a native here might ask you whose clam cakes you prefer—“Iggy’s in Oakland Beach; I love the doughboys there too!” Yet it was a big readjustment after life in Baltimore and DC. New job, new friends, new house, a toddler, and a dog to keep her busy.

“It felt kind of sleepy, because I feel like there’s this energy in DC. It’s the center of the country. It’s where things are happening,” says Smith, explaining that she was fresh off a classic New England fall weekend of apple picking and toddling through a pumpkin patch. “I feel like I’m having a totally new experience this time. It took some getting used to, but now I really like it.”

As, in, Chamber of Commerce-type liking for this tiny state with 400 miles of Narragansett Bay and Atlantic Ocean coastline: “So much waterfront. It’s so beautiful. I mean, everyone loves to be near the water, right? And you can do that just about anywhere here. I think that’s one of the best things about the state and that gives it so much potential that is untapped.”

Amanda Smith and her 2-year-old son.

And speaking of potential, Smith has begun to fully realize her own. By her own admission, Smith can be a bit of an introvert. She’s got the report card: “I’m doing the leadership class right now [as part of the Doctor of Nursing Practice program at the Johns Hopkins School of Nursing]. We all had to do the Myers Briggs assessment, and I got I-S-T-J, for Introvert, Sensing, Thinking, Judging.”

And that’s totally fine, of course. But when time is of the essence, and a decision must be made, chances are you’ll see a different side of Smith.

“A couple of things I learned while doing the Myers Briggs: One is that there is some evidence that natural introverts can just as easily emerge as the leader of a group as natural extroverts if they simply behave like the natural extroverts.”

For Smith, that does not simply mean putting on a mask or faking it.

“I understand what my natural tendencies are, but I also now understand that sometimes when certain situations call for different behaviors, I’ve built the skills through practice that I can just do those.”

In fact, she says, any work-life introversion began fading as she started the Master’s (Entry into Nursing) program at JHSON. “These are behaviors and skills that you can develop. Anyone can, over time. Even back in the master’s program, I was developing those skills being a new nurse, going through orientation and then being responsible for your own patients, fielding questions from the parents … all along the way, you’re building those skills.”

As for the DNP, “The main reason is that I want to teach. I know I love teaching the families. In the future, I would really love to teach at a nursing school.” She’d first like to work as a nurse practitioner to gain some years of clinical experience.

“I think the DNP will set me up well to work in academia as well as in the clinical setting. Also, I would like the door to leadership opportunities to be open for me. I know that the chief nursing officer at the hospital I used to work for had a DNP. I know I want to teach for sure. I don’t know exactly what leadership positions might look like that I might want. But I have the idea that I might want them. I’m young [29], so I figure I’ve got several years ahead of me, and doing the DNP now will set me up well when I want to pursue teaching and leadership down the road.” — Steve St. Angelo