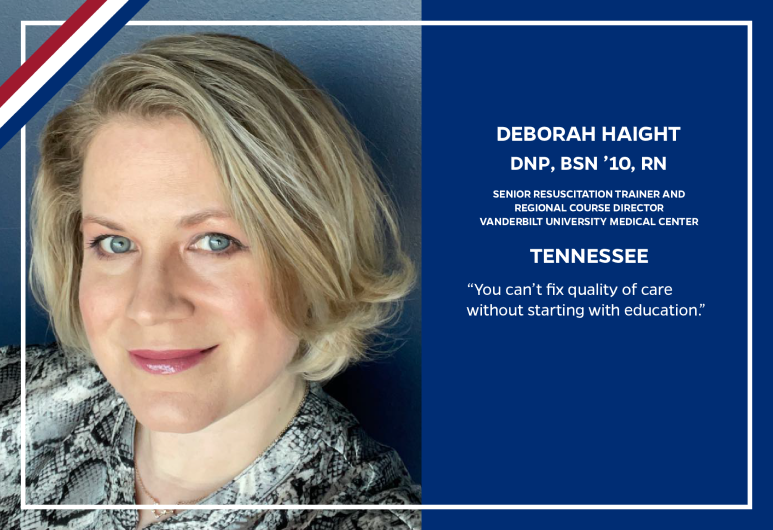 It was the middle of the night on the Vanderbilt University Medical Center burn unit in Nashville when a patient bed went on the fritz. Nobody was coming to fix it at that hour. But there was duct tape. And there was Deborah Haight, a biomedical engineer turned floor nurse—quite literally on this particular evening as she disappeared beneath the malfunctioning bed. Problem solved.

Today, Haight, recently named senior resuscitation trainer and regional course director for the medical center, is ready to MacGyver health care across affiliated regional hospitals not with duct tape, a nail file, or paper clip but through education. “You can’t fix quality of care without starting with education,” she says.

It’s a progression that has come naturally for Haight, who chose the burn unit at Vanderbilt soon after graduation from the Johns Hopkins School of Nursing. She worked the night shift for three and a half years, treating both pediatric and adult burn patients from within a 500-mile radius.

Meanwhile, most nurse training occurs during daytime hours. Haight volunteered to begin training nighttime colleagues and learned herself that she liked teaching. She began working with the Resuscitation Program in 2012 and kept up the trainings as she earned her master’s degree and became a family nurse practitioner. These days, “I get all the new hires, anyone from stepdown to acute care to the ICU. Some have never seen a code before. I get to mentor them while I have them. We have these candid talks about their fears and their futures. I’m a safe space.”

Haight says it’s interesting to witness how nursing is changing as she instructs both career changers like herself and first-time grads, all new to nursing. Her own journey began as a jet-setting tech consultant, as in living in New York City and flying from Newark to Los Angeles to meet with a client and then soaring back home again in a flash. As a lifestyle, it was fun and exciting. As a life choice, it was … a bit much. Her biomedical engineering degree meant Haight had completed all the prerequisites she’d need for medical school. She wanted health care, but becoming a physician seemed a serious time investment. So she dabbled in different health-related training before finally landing in nursing at Johns Hopkins. (By then, of course, her prereq credits had expired, and she had to take them all again.)

Her engineer’s training still impacts “how I look at and process things,” Haight explains. “It’s a way of thinking and problem solving. When engineers talk, they link their successes to the failures that helped get them there. As nurses and physicians, we don’t like to talk about our failures.” Such reticence means that opportunities for success can be missed.

Likewise, Haight says her Johns Hopkins Nursing education has permanently imprinted on her. “Not a day goes by that I don’t think about Johns Hopkins,” she says. It’s one of the reasons she remains at Vanderbilt. “At Hopkins, they were so creative with their research. It makes me glad to be in a similar environment. It reminds me of the multidimensionalism of Johns Hopkins.”

“It will be nice to be able to help the regional hospitals increase their knowledge and quality of care, to make sure we all speak the same language … so they don’t have to transport patients all the way to us.” — Steve St. Angelo