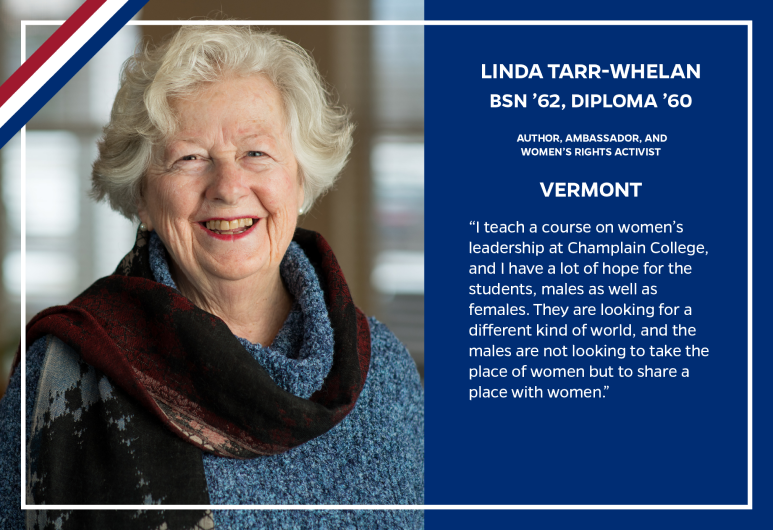 Linda Tarr-Whelan needn’t look far into the past for hope that America can change. Her mother wasn’t allowed the right to vote. Tarr-Whelan has been an ambassador representing the United States at the United Nations during President Bill Clinton’s term, was a deputy assistant to President Jimmy Carter, and was once named one of the 50 Most Powerful Women in Washington by Ladies Home Journal as part of a long and influential career in leadership in the fight for women’s place at the table.

Her prize-winning 2009 book, Women Lead the Way: Your Guide to Stepping Up to Leadership and Changing the World, continues to sell, and to touch people. “Not a month goes by that I don’t hear from someone who tells me my book had a big impact on their lives.”

And perhaps, explains Tarr-Whelan, we need only look one generation forward for more hope.

“I teach a course on women’s leadership at Champlain College [in Burlington, VT], and I have a lot of hope for the students, men as well as women,” she explains. “They are looking for a different kind of world, and the men are not looking to take the place of women but to share a place with women.”

Tarr-Whelan, who graduated in 1960, points to Johns Hopkins as well as her own gumption for starting down the road in a campaign for the rights of nurses and women. “It goes back to my first position,” she says, the very first day as a medical-surgery charge nurse in Illinois. At 10 a.m., the director of nursing tapped her on the shoulder and ordered her into the office. “There I stood at the other end of her desk, like a true penitent. She said, ‘Do you want to resign, or do you want to be fired?’ ”

The offense? “Dr. So-and-So walked into the room and you did not stand up.”

Not only had Tarr-Whelan been unfamiliar with such standards of subservience, “I was sitting next to the patient, fixing an IV. … ‘You’ll have to fire me.’ ”

She no longer had a job, but she had a springboard. “Nursing has always been my guide stone,” she says of her search for “where could I make the most difference? I come from a family that believed that you should make a difference. It’s why I chose nursing.”

Thus began a career as an international expert on women’s leadership in the economy and government: as administrative director of the New York State Department of Labor, chief lobbyist for the National Education Association and Policy Director for AFSCME, AFL-CIO, managing partner in Tarr-Whelan & Associates, an international consultancy, as president/CEO of the Center for Policy Alternatives (a think tank), and distinguished senior fellow at Demos as well as the positions bestowed by Presidents Carter and Clinton. She earned the Woodrow Wilson Award for public service from Johns Hopkins University and Distinguished Graduate Award from the Johns Hopkins University Alumni Association. Tarr-Whelan is a fellow of the American Academy of Nursing and has received two honorary PhDs.

One key tenet of Women Lead the Way is that the tipping point for making genuine change, on leadership boards in business, medicine, or whatever field, and in legislatures across the U.S., is merely 30 percent female representation to change thinking, leadership strategies, and agendas.

Today, Tarr-Whelan is mostly retired, and recently back from a journey to Ireland with her husband’s fresh Irish citizenship in tow, 35 years after a similar journey. She may write an update of her book “to compress 30, 40, 50 years” of promise and disappointment as the United States falls farther behind the rest of the world on women’s rights. “I have more hope for other parts of the world,” she explains. “U.S. women are too complacent. We look at the firsts [first astronaut, first symphony orchestra leader, first vice president, etc.], and we think, ‘We’re doing fine.’ ”

The truth is that the same worries Tarr-Whelan had for her own daughter remain as she watches a granddaughter in young adulthood enter an arena where she’s simply not valued as much as a man.

“I’ll never be one to sit in the corner and say there’s been no progress,” Tarr-Whelan says. “But it’s too slow.” — Steve St. Angelo