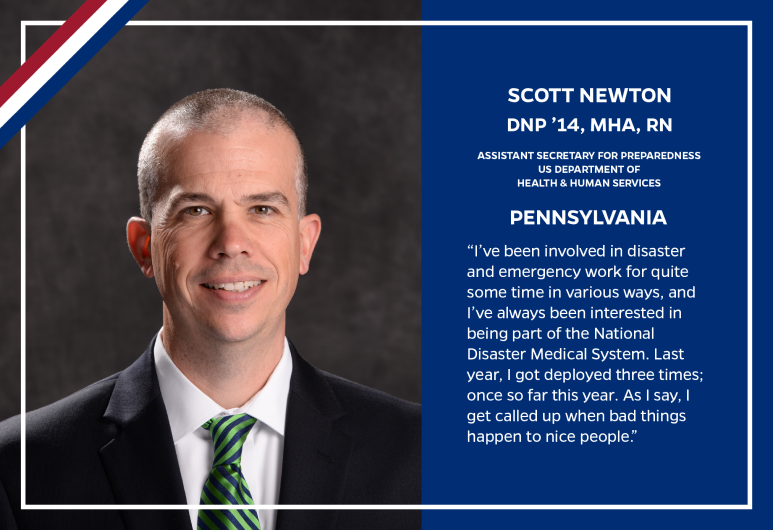 It wasn’t a crisis; not an emergency. Scott Newton, DNP, MHA, RN, handles those in his sleep. After three full decades in nursing, as a firefighter/paramedic, emergency nurse, as an expert and leader on hospital preparedness and disaster planning, Scott Newton simply needed a timeout. “At the end of 2020, I decided to take a little sabbatical from full-time work. The pandemic gave us all a pause. I needed to think about what my fourth decade in nursing was going to look like, and be intentional about it.”

Some of it would look very familiar. Newton had been doing “a great deal of volunteer work in pandemic response and doing the vaccine clinics and that sort of thing.”

“That was sort of the point at which I decided that my fourth decade was going to be about giving back, in sort of a back-to-basics approach”: doing disaster work, humanitarian work, and “sharing my knowledge and experience to prepare the next generations of nursing as they come into practice, either at the bedside through direct modeling of that behavior or through coaching and mentoring.”

Part of that was a decision to take a casual, emergency room staff position with Allegheny Health Network “to get back to the bedside with the current nursing generation, to see what’s happening, what they’re thinking, to sort of check the pulse of nursing, if you will. And it’s been fun reconnecting with the patients. I’m doing that just to keep my skills warm.”

Phase Two was checking in on his dream job: “I’ve been involved in disaster and emergency work for quite some time in various ways, and I’ve always been interested in being part of the National Disaster Medical System,” under the auspices of the federal Department of Health and Human Services (HHS). “For many years, they weren’t doing any hiring. In 2020, they opened up hiring again.”

Newton, who grew up in thrall to the TV series Emergency, put on the flashing lights and siren and sped after the position. HHS wasn’t in quite so big a rush. “It’s a little bit of an arduous process … but I got hired into the Pennsylvania 1 Disaster Medical Assistance Team.” In June 2021, he was officially sworn in.

The rest of the plan?

“I kind of have three different area that I’m practicing in: global, national, and local.”

The HHS job he considers “intermittent employment”: “Last year, I got deployed three times; once so far this year.” The HHS position involves response to disasters that happen domestically. “As I say, I get called up when bad things happen to nice people.”

Newton also has begun working with Samaritan’s Purse, a faith-based, international relief and humanitarian organization based in North Carolina.

As for local, Newton is keeping his ER job with Allegheny Health Network and is working with a faith-based group in Pittsburgh, his hometown, that runs a clinic for underserved populations. Plus, it has a trauma response team that goes out into the community where violence has occurred to build resilience among community members, equipping people in the community to support each other, all to hopefully prevent future violence from taking place. And he will keep teaching in the prerequisites program at the Johns Hopkins School of Nursing.

Each of the non-HHS positions offers Newton the flexibility for rapid deployment for the government, often with 24 hours or less notice.

Looks like a pretty action-packed decade ahead. “It’s fun for me,” Newton says.

What has surprised him back at the bedside? “A couple of interesting observations: First, the level of technological savvy that is required just to be an entry-level practice nurse today is so much greater than it was in past generations. … These nurses are coming in with phenomenal tech skills, and there’s almost no limit to their uptake of the technology.” Newton sometimes has to ask a younger colleague to help him figure out how a certain piece of technology works. “They say, ‘Wow, I can’t believe you’ve never used this,’ and I’ll say, ‘Well, there’s a long list of things that I’ve used that you’ve never used. So I’ll tell you what, let’s just call this a knowledge exchange between generations.’ So, the ubiquity of technology at the bedside, and I think that’s only going to continue to grow. Thank god the patients are still the same wherever you happen to be.”

Another thing he’s fascinated by is the level of indirect communication and collaboration. “I don’t know if it’s a good thing or a bad thing. It’s just different.”

“Because we’re so pervasive with our technology in place, what I find is there’s just a lot of one-way messaging that happens within our technology ecosystem. What I was used to in my own practice and my own preference is to have that two-way conversation going [asking questions or seeking clarification]. The technology doesn’t mean that you can’t do it, but it has to be intentional to get to clarity much more quickly, especially in a clinical setting where the teamwork is so important.” — Steve St. Angelo