Growing up, I had to struggle with the image others had of Baltimore. It wasn’t traumatic by any means, but the ignorance was astonishing. My peers knew the Inner Harbor and outside of that was a gangster’s paradise, with images of rotted row homes and destitute neighborhoods hidden under gray and gloomy skies, with gang members as the ruling class and the survivors of the hollowed-out factories doing what they can to get by. But hey, they have the Inner Harbor, and that’s nice.

“Oh, you think you’re tough? You should go talk to Craig, he’s from Baltimore.” Normally, I would welcome any comment that would make me look tougher (mostly to impress the ladies), but this was embarrassing. How could these people who have only visited one section of Baltimore and base most of their opinion on TV shows where the focus of the show is (drum roll)…crime! They never lived here. How could they make a sound judgment of my hometown when their perception of Charm City comes from experiences that are so narrow and brief? 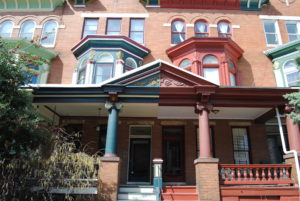 Among the most appalling – 24/7 Wall Street announced Baltimore as one of the worst cities in America to live. 24/7 Wall Street claims that its criteria for the survey were based on crime, demography, economy, education, environment, health, housing, infrastructure, and leisure. But, as per usual, crime was the center of attention in the article itself.

Many American cities have a crime problem and, unfortunately, Baltimore is usually singled out. We get bad press on a regular basis. It’s what the people outside of Baltimore know, because they’ve seen The Wire and Homicide. “Crime is a juicier story and if we can keep it one place, we’ll just use Baltimore,” seems to be the thought process. But for some reason, people choose not to see communities coming together to better the city.

How come we can’t focus on the research and programs that the School of Nursing is using to help improve communities and reduce violence? Take Professor Deborah Gross for example. Her work with the Chicago Parent Program is helping parents in Baltimore and beyond better connect with their children and reduce behavior problems at an early age. How about Jackie Campbell and Nancy Glass and their development of the Danger Assessment, a tool that helps individuals in abusive relationships measure their level danger before they suffer any serious violence? We want violence and crime reduced in Baltimore, and we’re doing something about it.

Other factors reported in 24/7’s ill-informed survey were housing price, median household income, and educated population. Too often, the public forgets that Baltimore is a “blue collar” city. For a long period of Charm City’s history, the biggest employers were GM and Bethlehem Steel with smaller companies built around supporting these two giants. Jobs in the plants were offered to recent high school graduates where workers could make a career with steady pay and regular hours. Row homes popped up all over city and served as efficient and affordable ways of living and made great homes for the families of these workers. I came from one of those families. I lived in one of those homes. I was a member of one of those communities.

When these two plants closed down and went overseas, Baltimore struggled. The companies left and so did the people. Many of the row homes went vacant. Housing prices did go down and so did the salaries. And for many, the story ends there – a wasted Rust Belt city that succumbed to crime, where the gangs rule and the rest live in fear. If you’re one those that chose to end the story there, you obviously haven’t spent much time in Baltimore.

Though the old bones stand, life is given back to the skeletons.

If you’ve been reading the There’s Charm in Quirky series (which I’m sure you are with aching anticipation for each coming blog post), you should be noticing a common theme in each neighborhood and characteristic of Baltimore — evolution. Charm City struggled, but it’s evolving. Sure we’re going about change in our own quirky way, but the down-to-earth, blue collar character of Baltimore is drawing people and companies to the Land of Pleasant Living.

Startup incubators are setting up shop in Baltimore, 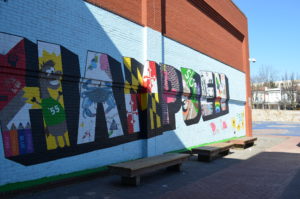 including Johns Hopkins’ own in East Baltimore at the new 1812 Ashland Building. Old factories and warehouses are being repurposed to house small businesses, offices, and people. Charm City is also becoming the exemplar of the “shop local” movement with small businesses setting down their roots among the different neighborhoods. As more jobs open and businesses settle in Baltimore, the population is becoming more educated.

And let us not forget the cultural renaissance that Baltimore is experiencing. Charm City is home to America’s largest free arts festival, Artscape. We’ve become a host for Light City, an event that brings light shows and artistic expressions of light over an entire weekend. Music acts and festivals fill the venues. Tourists and locals alike sit next to each other in the dozens of restaurants that have made Baltimore a destination for foodies. We sport museums of industry and antiquity.

While Charm City’s evolution is not as obvious as cities like Washington, DC and New York, where new buildings seem to appear every five minutes, we’re still growing. Effective and long-lasting evolution needs time and, as the old adage goes, “it takes a village.” New York and Washington have experienced histories of crime and it’s only been in recent decades where a revitalization and decrease in criminal acts has taken hold.

We are changing, it’s just not as obvious. We’re becoming a haven for the young and ambitious, you just have to look a little harder. Our culture is being reshaped, you just have to live it. Can you truly say that Baltimore is one of the worst cities to live in America?

By the way, Baltimore was also voted as one of the top cities for singles. Ladies, have I told you how tough I am?