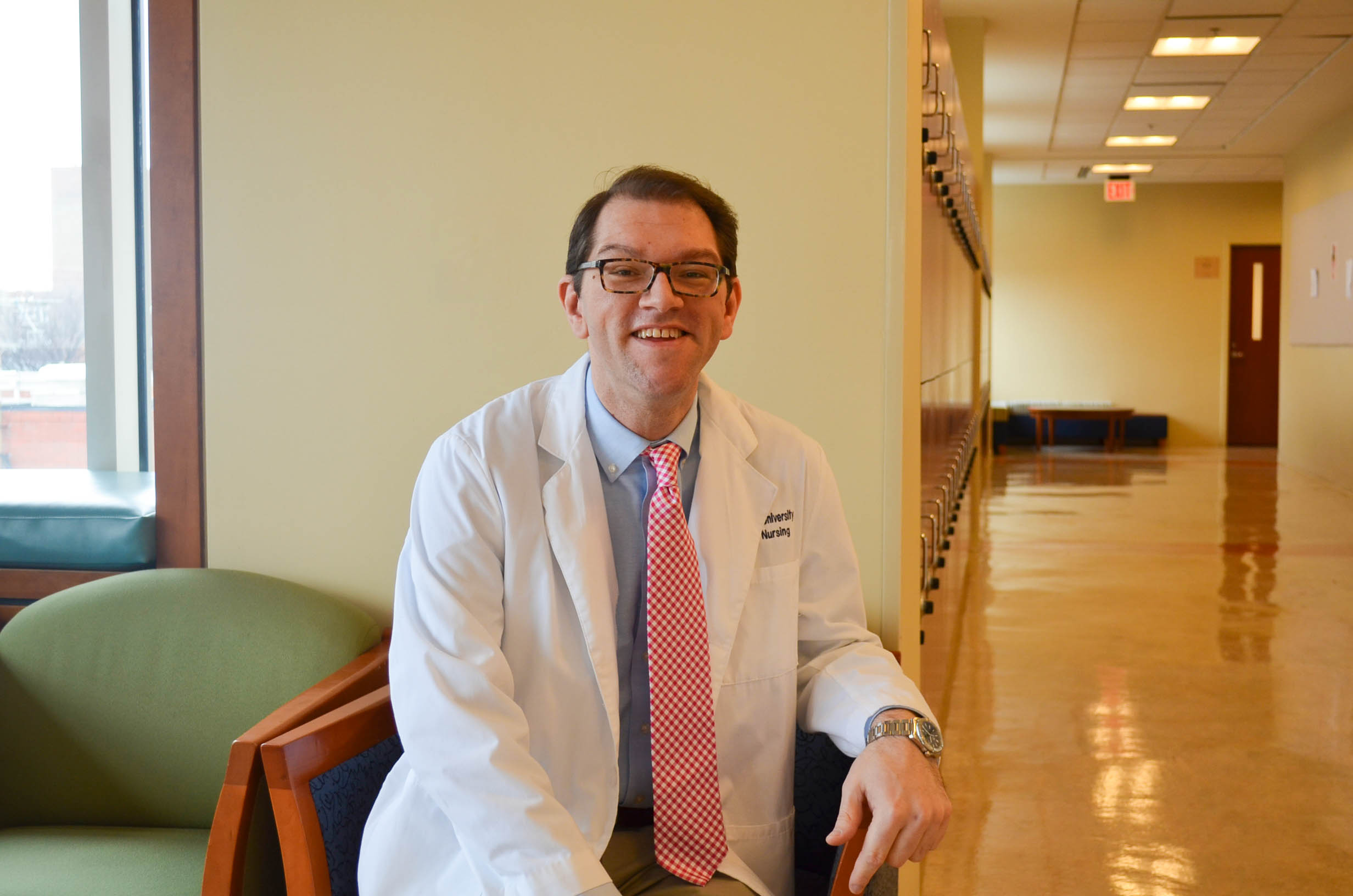 How does a former bone marrow and stem cell quality collection manager end up in nursing? Just ask Lou Bartolo, a Master of Science: Entry into Nursing student at the Johns Hopkins School of Nursing (JHSON). Though the New Orleans native wanted to be a nurse from a young age, his start was in business.

Lou attended Our Lady Holy Cross College and obtained his bachelor’s degree in business administration. Still holding on to the desire to work in health care, Lou received his Emergency Medical Technician certification and then earned a master’s in health promotion at Northwestern State University of Louisiana. He served as an intern for the Health Resources and Services Administration and then went to Medstar Georgetown University Hospital to work with bone marrow and stem cell quality collection.

To grow within bone marrow and stem collection quality control, Lou needed obtain a minimum of an MSN which he is now pursuing here at Hopkins. But he won’t stop there. When the Master of Science: Entry into Nursing – Cohort III student is finished his MSN, he plans to go for his Executive Doctor of Nursing Practice (DNP) degree to look at quality control in entire hospital systems. “I’m going to do the Executive DNP following [the MSN] to have that leadership, and then I can take it to an even higher level not to one department in health care quality, but an entire hospital,” states Lou.

“The whole thing as far as the quality field fits in pretty well because I have the business degree, but I also have a health promotion and nursing degree. The three of them fit in together for those executive positions and leadership roles for the health care quality side,” Lou comments. The diversity of his different degrees gives Lou an advantage in the quality control arena of the profession. They give him a well-rounded perspective into structural organization and the medical and scientific knowledge needed to maintain high quality of health care, specifically in oncology where bone marrow and stem cell collection is most concentrated.

Although male nurses are a minority in the profession, 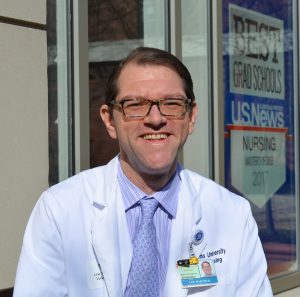 Lou was never alone in his clinical unit, and never noticed a difference in the way he was treated. “Sometimes I think people think it can be challenging, but I haven’t really seen that. They’ve all been very welcoming and really no issues,” says the MEN candidate, reflecting on clinical experience. Studies have shown that many men do not choose the nursing profession due to the stereotype that it is a “woman’s job.” In his clinical experience, Lou has never felt as an outsider and found that many of the nurses appreciate the male perspective in certain situations.

Lou has recently applied to be the director of the Eastern Division of the National Student Nurses Association (NSNA). The director receives direct assignments from the president of the NSNA, becomes the chair of a committee, and represents the school at the annual Student Nurses Association Conference. At Hopkins, Lou is involved in the JHSON American Assembly of Men in Nursing chapter, the Student Nurses Association, and the Community Outreach Program at the Wald Clinic. Lou was the liaison between the organizations and DKMS for the JHSON bone marrow donor drive and Medicine for the Greater Good to perform blood pressure screenings in the Baltimore community.

In his free time, he enjoys taking trips back to Washington, D.C., having dinner with former co-workers, and attending performances at the Kennedy Center. Lou currently resides in the Baltimore neighborhood of Fells Point, where he takes leisurely walks and studies along the waterfront with the convenience of being in walking distance of JHSON.

With the world becoming more connected through tweets, posts, shares, and pins, Craig keeps the School of Nursing in the mix with the ever-growing, complex web of Social Media. Craig manages all JHSON social media accounts, serves as editor of SONvitals, and contributes to On The Pulse.