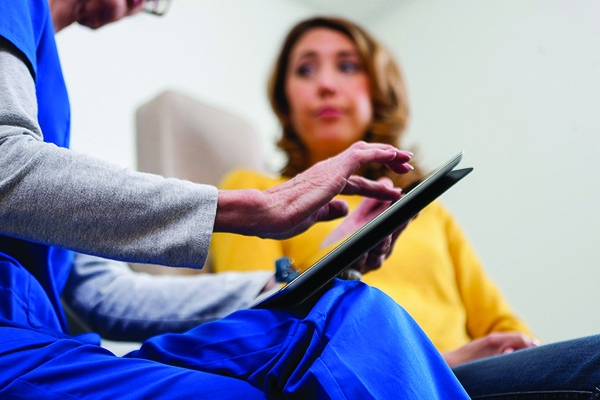 The July 2013 headline in U.S. News & World Report announced that, once again, Johns Hopkins was ranked the number one hospital in the nation. But it didn’t tell the back stories that, in many cases, star nurses.
There are those who gave valuable input on designing state-of-the-art communication projects that are revolutionizing the way providers and patients gain access to medical information. Others championed the installation of procedures that boost employee safety and reduce injury rates. Still others were an integral part of a multidisciplinary team that helped one of the hospital’s centers obtain a certification indicating an exemplary level of care for complex patient cases. And so much more. But don’t take nurses’ word for it.
Those who work with Hopkins nurses—but aren’t practicing nurses themselves—had plenty to say about their colleagues’ impact on propelling the hospital, for the 22nd time, into the nation’s number one slot.

When it comes to cultural shifts within a hospital, perhaps no such change has been more monumental than the ongoing move from paper to electronic documentation. It’s also another example of a hospital initiative where nurses are playing a leading role.
“Nurses deal with patients most frequently. They are there all the time,” says Peggy Ardolino, RN, MAS, director of Clinical Information Systems at Hopkins. It made sense, then, that nurses would exert heavy influence on this process, from spending countless hours articulating specifications for electronic medical records to vetting newly implemented systems.
“We couldn’t have gotten where we are today, nor will we get to the full deployment of EPIC [Hopkins’ single integrated medical records system], without these clinical informatics folks who, for the most part, are nurses,” Ardolino says.

Current Maryland legislation requires hospitals to have safe patient handling’ committees. Hopkins got a head start, launching its committee in 2007. The goal was smart and simple: to prevent employee injury and maintain patient dignity by replacing ‘manpower’ or, more aptly, ‘nurse power’, with patient lift devices.
Heading up that enormous initiative were co-chairs Anita M. Stone, MS, HEM, the hospital’s health, safety and environmental manager, and Judy Rohde, ScD, RN, director of Pediatric Nursing at Johns Hopkins Children’s Center. Together, the co-chairs studied how other hospitals had effectively implemented lifts throughout their hospitals. “We took field trips to these places,” Stone recalls.
They also presented the plan to the hospital as both an employee safety initiative and a plus for patients. “People have had career-ending injuries from moving [heavy] patients,” Stone says. “It’s also about dignity. Would you rather have six or seven people looming over you, or a device?”
Having a nurse champion this major operational shift eased the transition for those scores of end-users of the change: unit nurses. “A lot of units have bought into it and they love it,” Stone says. “It’s a culture change.”

Just as they are primary drivers behind new systems at Hopkins, nurses also serve as a force behind prestigious certifications. Recently, the hospital was certified as a Comprehensive Stroke Center, a distinction recognizing an institution’s capacity to offer ’round-the-clock specialized care to the most complicated stroke patients. Hopkins was the first hospital in Maryland to receive the certification. The certification takes into account the use of the latest technology, the highest level of provider expertise, and extensive data collection on patients.
“There was a huge involvement from nurses in this process. They put a lot of effort into looking at the data, and correcting performance issues,” says Victor Urrutia, MD, medical director of the Stroke Service at the hospital, who worked closely with nurses for eight-plus months to prepare for the certification.