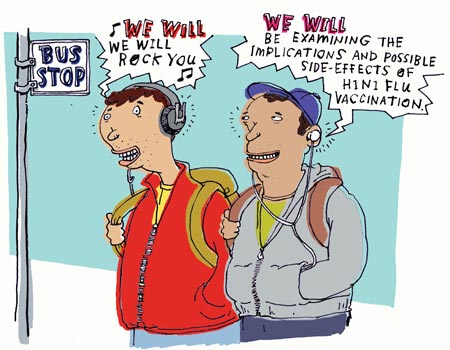 There was much that was good about the Summer 2013 issue of Johns Hopkins Nursing magazine, if I do say so myself. (I currently serve as its editor, so I do.) One was that it made deadline, for which many of you can take part of the credit. It featured fun and informative stories about Hopkins Nurses doing their thing the way only Hopkins Nurses can. And it had an adorable cover created by New York illustrator Aaron Meshon that everybody loved.

A couple of weeks after that issue landed, there came a call from Associate Professor Sarah Szanton, PhD, CRNP, who’s rightly been getting a lot of media exposure for her work with CAPABLE, a program that helps elderly, low-income Baltimore folks stay in their homes longer through smart, inexpensive measures. She wanted to chat about the cover.

Sure, I said. (All praise is welcome, after all.)

Now, as with the magazine, there is also much that is good about being — as I am — an outsider-inside-Hopkins: a fresh perspective, maybe seeing a cool story that insiders simply take for granted. “That old thing?” There’s enough great stuff going on at JHUSON that some of it can get overlooked. It’s the nature of the beast. Which brings us to that other part of being an outsider-inside. You know, the bull-in-a-china-shop dynamic.

My first impression of Meshon’s illustration for our cover, for instance: Hopkins Nursing cradles East Baltimore in its caring arms.

There goes Johns Hopkins having its way with East Baltimore once again.

She wondered whether some readers might think we were being snarky or, worse, kind of clueless. (Those weren’t her words, but I got it.)

See, the School of Nursing and other parts of the Johns Hopkins institution have taken great pains to gain — and hold — the trust of the East Baltimore population that we proudly serve but also benefit from serving. Where we see expanded care, others might see something quite different in the Hopkins-led growth and revitalization of East Baltimore: roaring beasts tearing up and carrying away parts of the neighborhood they grew up in.

Or so goes the narrative, one that might indeed be fed by images of huge nurses carting around chunks of East Baltimore. Maybe that’s OK, though, if it gets us talking about the Hopkins-East Baltimore relationship. There’s a long history of good here, but every relationship has its moments. Shoring this one up is a worthwhile crusade that will benefit everyone. Look at the story of the groundbreaking Henderson-Hopkins School partnership, built upon the notion that healthy young brains and bodies can begin to transform struggling inner cities. It’s an unquestionably positive step, but even this project had its detractors. Call it a work in progress.

Meanwhile, an illustrator from the Big Apple can’t be expected to know the subtle politics of East Baltimore. They are, however, something of which the editor of a Johns Hopkins publication should be mindful.

That’s how Dr. Szanton put it, rather than to suggest that Godzilla should perhaps slap me upside the head with a rowhouse. I appreciated that.

A favorite old editor reminded me frequently that even Babe Ruth, a Baltimore boy as you know, struck out every so often. So there’s that.

And I still adore the cover — and Meshon’s two other illustrations — despite any potential baggage.

What do you think? You might not all be as nice as Sarah Szanton but, like hers, your feedback is appreciated. And if you don’t like the cover, remember: It’s what’s inside that counts. Take a look.

And thanks for reading.