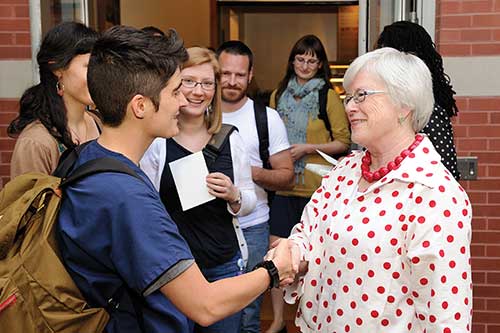 Who Has (Given You) Everything?

The School of Nursing began a fond farewell to Dean Martha N. Hill at a June Celebration in the Garden, a spirited affair in the courtyard behind the School’s Anne M. Pinkard building. Tributes flowed like wine on the beautiful spring evening, none more glowing than that of Walter “Wally” D. Pinkard, Jr., who has chaired the School of Nursing National Advisory Board during the dean’s entire tenure. Pinkard said, “I’ve never met a leader like Martha Hill.” It was a sentiment echoed again and again.

Then, of course, came presents. Led to the center of the courtyard, Hill was instructed to look up as a blue curtain fell. There, a wrought iron archway (added in secret atop brick columns) broadcast the dean’s mantra: Onward. There was a sneak peek at Hill’s official portrait by photographer Bruce Bennett, later unveiled as part of the Biennial Meeting and Reunion at Johns Hopkins Hospital, and a caricature of the dean aboard a rocket ship soaring–where else?–Onward.

“Just looking around this room, looking at these diverse classes of students, and the talented faculty and staff, to be able to be a part of this has been an extraordinary adventure,” Hill said.