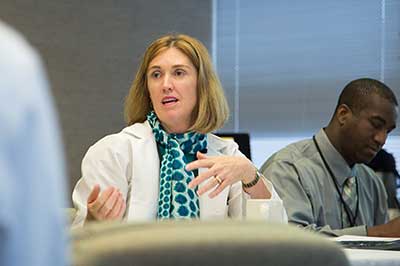 Julia Overton recognized the symptoms: She felt pressure on the left side of her head, her mouth was drooping, and she feared that she was having a stroke. She hurried to Sibley Memorial Hospital and was in an examination room within minutes. After hearing about the risks and benefits of a tPA, the medicine used to dissolve blood clots, Overton chose to take it. Then, a speech pathologist worked with her on swallowing. At regular intervals, she also did benchmark tests with the nurses, such as reading short sentences. “The team did not miss a beat in treating me,” she says. Just weeks later, Overton had made a full recovery.

Sibley’s multidisciplinary stroke team is determined to give her plenty of company. After three years of work developing protocols and standardizing care for stroke patients, the hospital received its Advanced Certification for Primary Stroke Centers from the Joint Commission in conjunction with the American Heart Association/American Stroke Association in May.

Building a Stroke Advisory Committee was one of the first steps. In the Emergency Department, Ohnmacht, Karen Pregnall, RN, and Jennifer Abele, MD, FACEP, Medical Director and Chair, identified key stakeholders from speech pathology, occupational medicine, transport, pharmacy, and dietary. In this way, “everyone had a say in how the process works,” Abele says.

Still, “it became very apparent that we needed a full-time person dedicated to strokes,” Pregnall says, so neurologist Jason Freeman, MD, came onboard in August of 2012 and soon Sibley had its certification.

Stroke protocols have since become second nature. “Nurses know exactly what is expected of them,” says Knittig. “It’s given them a sense of pride in the program.”

But the biggest payoff is improved patient care. “Outcomes for stroke patients are better when you follow established standards,” Ohnmacht says. “Certification was the right thing to do for our patients.”