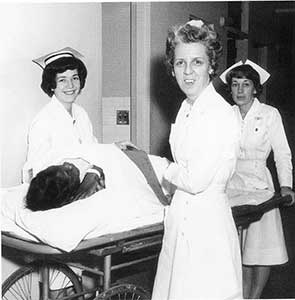 ‘Miss Farr Made Me What I Am Today’

Mary Farr Heeg ’41, a formidable teacher and a faithful alumna, would have been 100 as this issue of Johns Hopkins Nursing reaches readers. She was born in Baltimore, Md., to George and Grace (Young) Farr on June 12, 1913, and died peacefully in her sleep on April 1, 2013. She leaves behind a lasting legacy in the form of generations of Hopkins Nurses and will not soon, if ever, be forgotten. Those who came under her care and guidance, or even under her glare, knew her as a fair-minded but fierce believer in doing things the right way. She believed in young nurses’ ability to do just that, even if it took a little tough love to get them there. But she never belittled or embarrassed a student in front of a patient. She was respected and feared, but most of all beloved.

“There are many that will say there was no one like her–she was one of a kind, and many alumni will say, ‘Miss Farr made me what I am today,'” wrote James T. Kelley, associate dean of development and alumni relations to friends and alumni of the School of Nursing in announcing her death.

Melinda Rose, former alumni director, remembered her as “dedicated to Johns Hopkins Nursing and the Alumni Association. She and her great friend Betty Cuthbert ’43 shared a house on Washington Street behind the SON. They gave the house to the SON when Betty moved to a retirement home in the early ’90s. Mary had moved to Maine when she married but would visit Betty a couple times a year.”

The passing of Mary Farr Heeg was greeted across the Hopkins Nursing family with a collective sadness, and an eagerness on the part of former colleagues and students to share memories, a few of which appear here in her honor:

“She made me the nurse I am today–almost killed me, but it worked.”
–Genie Wessel ’68

“What a gift to have learned from her. We will remember all she stood for.”
–Shirley Wade Gardner ’67

“A dynamic and dedicated woman. I feared her, but I still remember her words and the things she taught me.”
–Katey Ayers ’67