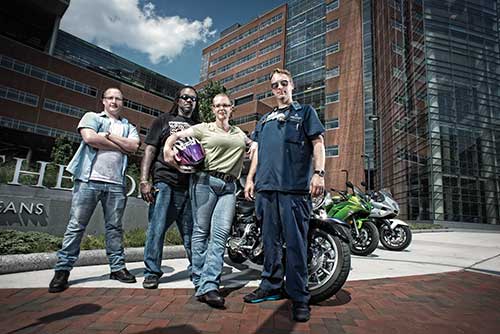 RNs Know Risks But Call Motorcycles a Ride to Sanity

Several motorcycling nurses in the Johns Hopkins Emergency Department recently discovered they all ride, and–if their chaotic schedules allow it–they’ll soon be hitting the road together. It may seem surprising that an emergency nurse would take on such a risky hobby, but Lisa Morlock-Wright, RN, who rides a Yamaha Stratoliner touring cruiser, says it makes some sense.

“People who love the [emergency department] have the thrill-seeking side, that fast-paced thing,” she says. (The hobby also gives ED staffers a chance to exercise their notoriously morbid senses of humor. RN Steve Wood, 33, says his co-workers call his Kawasaki Ninja sport bike his “donor-cycle”–as in organ donor.)

Morlock-Wright, now 43, didn’t start biking until she was 35 years old. “It had always been a dream,” she says. Her favorite routes are on curvy mountain roads, though she has cultivated a healthy respect for her hobby. In 2007, she had an accident that led to minor bleeding into the ventricles of her brain.

And she and her fellow nurses often treat victims of motorcycle accidents, a frequent reminder of the risks the pastime poses. On Wood’s first visit to the ED–a “share day” during which he shadowed a nurse as part of the application process–the very first patient he saw was a motorcycle trauma. “It was like, whoa, I’m going to see this a lot more if I select this type of nursing,” he says.
But RN Austin Combs, 24, who rides a Harley, says it’s all relative. “It’s dangerous,” he says. “But look how dangerous eating poorly is.”

In any case, these nurses say, as long as they’re cautious, the benefits of riding far outweigh the risks. Emergency nurses are often accused of being adrenaline junkies, and that probably goes double for ED nurses who ride motorcycles. But, Wood says, for him the appeal of biking has nothing to do with adrenaline. “I kind of think it’s the opposite,” he says. “It’s my getaway. There’s a Zen-like focus when you’re doing it, an awareness of what’s going on around you.”

Combs, who commutes to work from Carroll County, agrees. “We see the worst things you can imagine on a daily basis,” he says. “So when I come back to the countryside and ride my motorcycle through farms for 30 or 40 minutes, it’s pretty peaceful.”

As for Morlock-Wright, part of the enjoyment she derives from her motorcycle has to do with inspiring future bikers. She regularly takes long rides with a group of women bikers. “You always get young girls waving and grinning from the cars,” she says. “Their parents will be so disappointed when they ask for a motorcycle instead of a pony.”