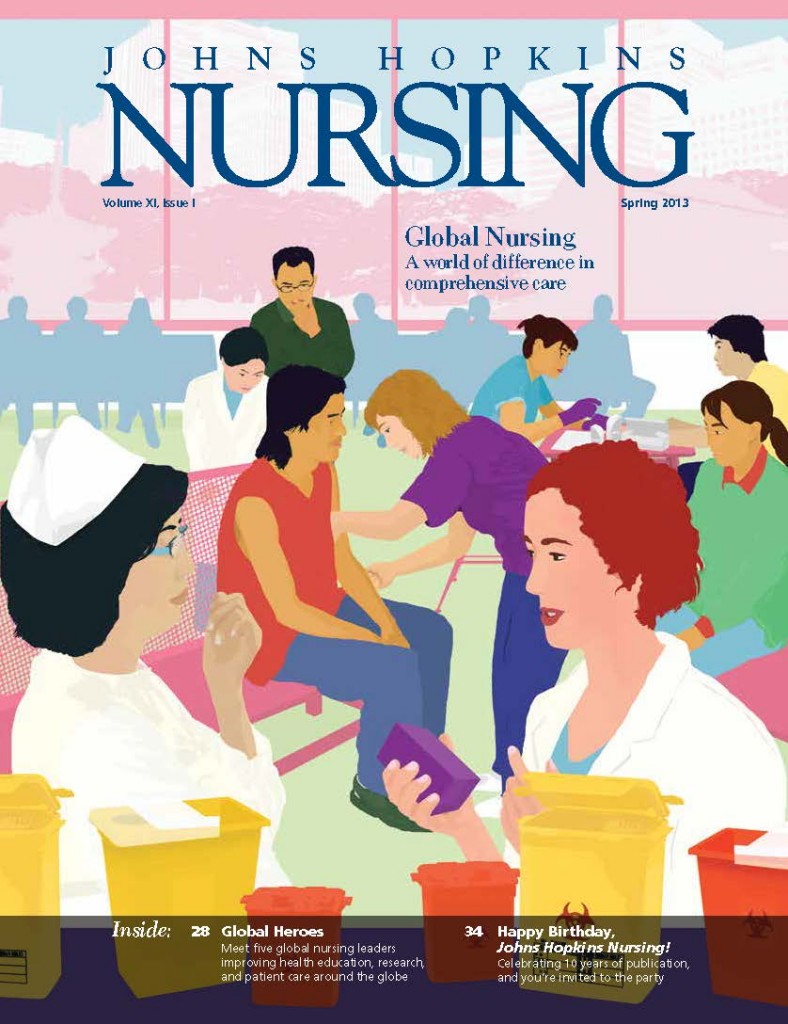 Here at Johns Hopkins Nursing, we can tell the boys from the girls. Yet it might not have seemed so in the Spring 2013 issue. In our tribute to Dean Martha N. Hill’s tremendous accomplishments at the school, we assembled a lovely spread of charts, one of which, “Student Gender Diversity,” switched the symbols for male and female. Apparently dazzled by the colors, we didn’t notice the gaffe. John W. Payne, MD (’61), did notice. He is an ophthalmologist, but still… ouch.

We truly regret the error and will try to do better. In the meantime we’ll offer a thank you and a salute to John Payne (Honorary Proofreader No. 1) and Nicholas Cunningham MD, DrPH, another Hopkins alumnus who quickly pointed out the slip.

A corrected chart and an update on the growing percentage of male students at the School of Nursing are published elsewhere in the magazine. We’ve also got more on Dean Hill’s sendoff, a look at East Baltimore as the home for uncommon collaborations and, increasingly, more students who ignore the neighborhood’s reputation and instead embrace its charms, and lots more.

Please enjoy the new issue. And if something doesn’t look quite right, give us a holler.

It was gratifying to see on the chart on page 7 in the Spring 2013 issue of Johns Hopkins Nursing that 96.5 percent of 2011 and 2012 graduates are currently employed. I do not, however, understand the statistic of 77 percent who obtained their first-choice position. How was that calculated? That statistic seems not to apply to my daughter ’12, and her cadre of friends because they accepted the only job they were offered. Perhaps they are not a significant percentile, but all of them graduated with awards or honors of some sort.

Since networking is now more than ever a crucial tool in the job search, it would be very helpful if you were to list the names of those 96.5 percent members of the 2011-2012 graduates, where they found employment, and in what capacity. It is an important networking tool for JHUSON alums, not only in the job search but in myriad other ways.

Editor’s Note: The employment statistics were based on preliminary data through March 1, 2013. Final analysis following the close of the 2012 employment survey in May shows that among all survey respondent, 75 percent answered in the affirmative to the question “Were you able to obtain your first choice in a nursing position?” We agree with Ms. Spiller that networking is a “crucial tool” and although these confidential responses cannot be shared, networking assistance is available through the Johns Hopkins Nursing Alumni Association. More information can be found at http://nursing.jhu.edu/alumni-giving/alumni/index.html or by contacting Alumni Relations.

In the Spring 2013 issue, I was inspired by reading about the work of Nicole Warren [PhD, MPH, CNM] with “matrones” in addressing excess maternal mortality in Mali [“Have Passport, Will Research,” page 18].
Having spent years working with auxiliary midwives in Nigeria, I was reminded of three lessons I learned:

We welcome all letters regarding the magazine or issues relating to Hopkins Nurses. Email 200 words or fewer to son-editor@jhu.edu. Letters will be edited for length and clarity.