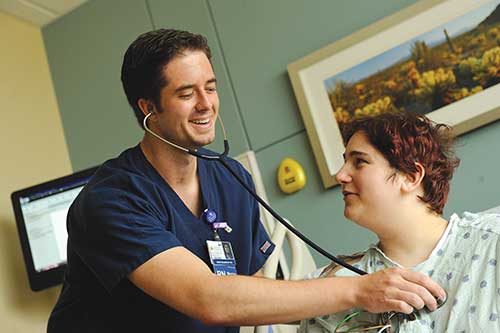 At Howard County General, the RN Fellowship Program Lives Up to Its Name In All Senses of the Word

At Howard County General Hospital, nursing fellow John McGowan is flourishing in the dawn of his career. He’s described by Vera Tolkacevic, RN, BSN, MBA and Nurse Mentor in charge of the RN Fellowship Program as “everything that we look for in a fellow–he’s engaged, cooperative, and eager to get everything he can out of the experience.” He loves what he does and gets great feedback from patients and colleagues.

Yet things could have gone very differently for McGowan. He describes himself as having had a “tough time” in nursing school. Other classmates, he reflects, struggled with the transition from nursing school to the realities of working on the floor. Some who won fellowships in other hospitals found themselves lacking adequate support to deal with the stress and challenges, and considered leaving those programs as a result. He credits Howard County’s program with giving him the resources and guidance needed to smooth that transition and creating a space where he can thrive and grow as a young professional.

The RN Fellowship Program began formally in 2006 to help new nurses succeed. It was designed with an in-depth two year structure that encourages the habits of lifelong professional development, combined with on-the-job mentorship from preceptors and clinical educators. New fellows are accepted into one of three annual cohorts, each a small group averaging about 10 recent graduates who will continue to meet and work together over that two year span. “It’s great to have people who are going through the same thing you are,” says McGowan, now approaching his second year. “You bond over the process, and sometimes you can help each other out because you’ve handled a similar situation.”

In Phase I of the cohort, the fellows spend sixteen weeks in nursing and hospital orientations, with eight days of classes known as Bridging the Gap that address a variety of topics including hospital practices, communication and teamwork, and developing strong self-care habits. During this time they provide direct patient care under the supervision of nurse preceptors on various nursing units. In Phase II, they receive placements on floors around the hospital, where they have a four- to six-week progression that takes them from independently providing care for a small number of patients to a full patient assignment. In Phase III, the remainder of the fellowship is spent practicing independently at the bedside, with regular cohort meetings to discuss the experience and share peer support.

“The program has people from so many backgrounds,” says Tolkacevic, who has been with the program for six years. “Some are on their first career, some on their second. I love seeing them grow. And many of them stay with us, so I see a cycle where former fellows have become preceptors for new fellows.”

“I’m amazed by how far above and beyond the preceptors go to give us support,” says McGowan. “They really know how to help us transition into being independent. I feel like all my hard work to become a nurse has finally paid off here.”