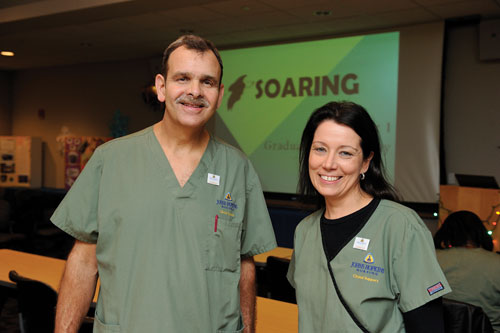 Early in the morning shift in Neuro-science Acute Care, a patient goes into arrest. She’s not one of clinical technician Cecil Harris’s assigned patients, but Harris is among the first to see it and jumps right in to help two colleagues who have initiated CPR.

Other technicians and nursing staff swing into action alongside him. It’s a swift, successful team effort that’s noteworthy for
not being unusual at all.

Samantha Cunius, RN, the SOARING nurse champion for Zayed 12 East, recalls that day’s team effort as one “great experience” among many, as cooperation has become even more common over the past year. The atmosphere of trust, communication, and personal connection between nurses and technicians that was fostered by SOARING, she believes, has led directly to improved patient care. “We used to talk to each other only when we needed to,” she says. “Now, everyone says good morning, and we chat outside of work. Before, everyone just did their job; now, we work together.”

The SOARING program, which rolled out in January 2012 with its first of four cohorts to date, created a work-study program for qualified Unlicensed Assistant Personnel (UAPs) that solved a catch-22 in the hiring process. “We had more than 80 open positions at a time, and not enough qualified applicants,” explains SOARING Program Manager Margo Preston Scott, MSN ‘00, RN, who spearheaded the project. “Part of the issue was that the job requires a year of hospital experience, which newly certified nursing assistants (CNAs) or geriatric nursing assistants (GNAs) wouldn’t have. We’d have RNs taking on those positions just to fill the needs of the unit.”

Working with local community colleges that offer the prerequisite Patient Care Technician II or Nursing Support Technician II courses, SOARING staff recruited students ready to enter the workforce. Candidates were interviewed by participating departments at Hopkins, and those offered a position were invited to participate in the SOARING internship. At the completion of the internship, they are released to work on their units of hire.

The fully paid, year-long program begins with twelve weeks of intensive courses. Instructors work with par-ticipants in small groups of four to six people teaching not only on-the-job technical skills, but also professional ethics, the history and organization of Hopkins, and related subjects. After three months of courses, the UAPs go to work in their units, partnered with an assigned nurse champion.

For the remaining nine months, they develop projects to improve work-flow in their units, and attend a monthly SOARING day of speakers and instructors to continue their education and professional development. They also have a strong network in their instructors and their unit colleagues to draw on for mentorship and guidance. The final SOARING day is a graduation day, with time for reflections, poster presentations about their future plans, and words of encouragement and inspiration from the staff. With the initial success of the program, SOARING has expanded to provide comparable professional development training for the entirety of Hopkins’ existing clinical technician staff.

What really makes SOARING special, though, is its holistic scope. “It’s much more than a job,” says Harris, the 12 East UAP who just graduated with the first cohort. “The whole time, it’s been about life in general. We’ve made bucket lists, we talk about time management, we deal with things that everyone struggles with. It’s enhanced my life personally in so many ways.” Harris, who had a 30-year career as an electrician before entering the healthcare field, even plays tennis with his nurse champion Sam Cunius, RN, who says she and Harris bonded right off the bat.

“We want to help them build a career path, not just get a job,” says Scott, who calls the program a ‘passion’ for her. “SOARING stands for Success, Ownership, Accountability, Respect/Responsibility, Independence, Integration, and Growth, and these are the core values we teach in our program. We help UAPs work on those things so they can practice at the highest professional level and build confidence.”

From Connection to Competence

Cunius jumped at the chance to become a nurse champion in the SOARING pilot units. “I was hired as a UAP and moved into an RN role from there,” she says, “so I’m really able to relate to both sides of the technician-nurse relationship, and I could see how this program would strengthen that partnership.”

Other units have been impressed by the deeply connected culture in 12 East over the past nine months. “Everyone had questions about it at first,” says Cunius, “but now they’re excited about getting new techs. And the program makes it easier for the UAPs to ask questions or ask for help, which is sometimes hard for technicians to feel comfortable doing. They take a lot of ownership, and that really helps us work as a team to provide the best front-line care for our patients.”

Harris loves his job and says he never misses a day if he can help it. “It makes you think, how can you in your lifetime work on something that improves someone else’s life?” he muses. “This is really my calling. I came to it late, but so what? I feel like I’m part of a family here, part of an organism that’s bigger than me, and I love what I do.”