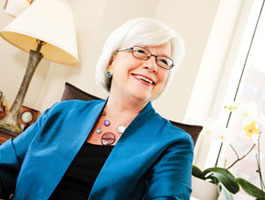 When Dean Hill first approached me to discuss what she thought might be the right timing for a transition of the deanship of our school, I was immediately stressed by the concept of losing such a phenomenal leader. But as Martha shared her thinking with me, I was so impressed with her approach to positioning the school for a transition in leadership. Never once was the conversation about Martha; it was always about the Nursing School and its promising future.

All of our institutions would be well served by having leaders with Martha’s vision, selflessness, and stature. She defines leadership and this school will continue to be enriched by having Martha return to the Johns Hopkins University School of Nursing faculty.

Now we’re thinking transition. That’s largely due to Martha’s perpetual optimism and famous “Onward” philosophy and—for me—the opportunity to serve on the University search committee for the next dean. Yet there’s another key factor driving our new outlook. Many of us have reached an eye-opening realization: Once again, Martha, the ultimate agent of change, is providing the catalyst for another milestone in the School’s history.

In stepping down from an amazing platform of accomplishment—a platform built through her constantly upward trajectory of positive and successful change—she is creating an enviable launching pad for another decade of enduring Hopkins excellence. As she has done throughout her career, Martha is creatively employing change to kick start the transition to tomorrow’s Johns Hopkins University School of Nursing and the excitement that brings to us all.

As guest editor for this issue, I’m pleased to have the opportunity to celebrate Martha’s leadership with you. Although her “Onward” philosophy usually prevents her from looking in the rear view mirror at the school’s many accomplishments during her tenure, the following pages and foldout do just that. They are only a small representation of where she has taken the School and only a few planks in the platform that she has built. Take a minute and join me in looking back at this incredible climb.

On a sad note, Martha faced another life transition this year. Just last month her husband and true life partner Dr. Gary Hill died. Martha and Gary were an iconic Hopkins couple; both alums, both professors, both outstanding researchers, both leaders in their fields. Although he lived and conducted research in Paris much of each year, Gary was always here for us as a genuine member of the School’s community. He will be missed. — Walter “Wally” D. Pinkard, Jr.

Editor’s Note: At the request of Dean Martha N. Hill, Wally Pinkard is this issue’s Guest Editor. Mr. Pinkard is a Johns Hopkins University Trustee Emeritus and former Vice-Chairman of the Board. Throughout Dean Hill’s term as dean, he has served as the Chair of the School of Nursing National Advisory Board.

Got a great story or a favorite candid photo of Dean Martha N. Hill? Please share them. Visit www.nursing.jhu.edu/onwardhill. Or send stories and pictures through Twitter or Instagram using the hashtag #onwardhill. Or just send them via email to son-editor@jhu.edu.

Student House
Opened in 2010, gives students additional study rooms, lounges, and a kitchen and is home to the Student Affairs offices.

SON House
Added to campus in 2009, the SON House allows more room for staff offices, lounges, and a kitchen.

Room to Grow
Land purchased by SON in 2010 for future growth.

Courtyard
Expanded to create a unified campus, this East Baltimore oasis is a lush garden with a fountain, cherry trees, and picnic tables.

On the Pulse Podcast
Episode 18: Monkeypox: Where We Stand
This episode features Mickey Dhir, an infectious disease practitioner at Chase Brexton Health Care and a PhD student at the Johns Hopkins School of Nursing. Podcast References and Resources: What You Need to Know About Monkeypox Monkeypox (Centers for Disease Control and Prevention ) Monkeypox (World Health Organization)
More Podcasts