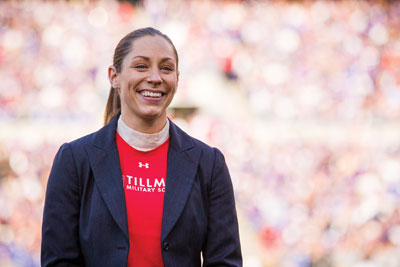 Students Take the Ball and Run With It

The Hopkins nurse has never been one to stand on the sidelines. So it is especially fitting that two students of the Johns Hopkins University School of Nursing were among the many great stories to spring from a banner year for 2013 NFL champion Baltimore Ravens. From the grit and valor of an Iraq war veteran to the savvy and determination of a scholarship contest competitor, the best attributes of Hopkins nurse leaders were on full display.

Emily Thompson Schelberg never imagined any reward beyond the respect of her fellow Marines. Yet there she stood at M&T Bank Stadium, her smile visible halfway to Iraq on the Jumbotron, her emotions spinning among comrades overseas, a husband fresh from a fourth tour of duty with the Marines now standing just a few feet away, and the job at hand. She was representing the Pat Tillman Foundation as its NFL-Tillman Military Scholar before a full house of Ravens fans, Hopkins alumni, and fellow vets.

Military training, even for a Marine sergeant, only goes so far.

“For the few moments I was standing on the field, I was really trying to make time slow down,” says Thompson Schelberg, now a student pursuing a master of science in nursing (MSN) degree. “It was a very surreal and humbling experience.”

East Baltimore is a long way from Al Anbar province in Iraq, where Thompson Schelberg served as a turret gunner aboard a 7-ton truck ferrying supplies, troops, and detainees. Along that dangerous pathway, Thompson Schelberg also found her life’s calling in the humanitarian aid missions she witnessed. Slowly, she says, the caring and skill of the servicemen and servicewomen in the war-ravaged communities as well as a fascination with the medicine they were performing led her to realize that her own story should do an about-face.

Meanwhile, Jennie Flanagan (Accel. ’13) was just as determined that her story shouldn’t take any such turn. 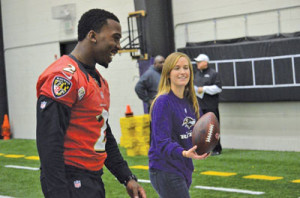 She had entered the Dr. Pepper Tuition Giveaway for a shot at a $100,000 scholarship, and won the initial round with a terrific video. She wasn’t about to let a little thing like not knowing how to throw a football stop her from competing further.

A bucket of can-do attitude and one very lucky break later, Flanagan stood next to Ravens quarterback Tyrod Taylor, who offered tips on footwork and other fundamentals. The bad news? Despite her newfound pigskin proficiency, Flanagan didn’t make the finals. The good news? Dr. Pepper tripled her base winnings just for showing up at the competition to $7,500. “It was a pretty spectacular weekend,” she says.