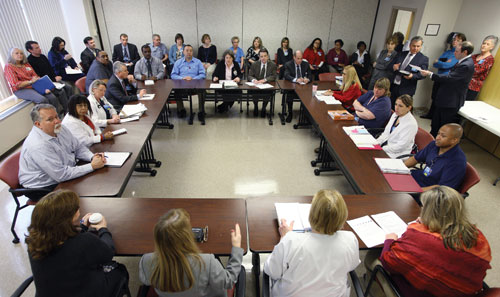 During the 2012 holiday season, the patients at Suburban Hospital had a list of concerns: mushy vegetables for dinner, a busy doctor who hurriedly answered questions, and a phlebotomist who didn’t thoroughly explain the standard blood-drawing technique. And because Suburban is constantly striving to improve patient care, the Hospital now has a new system to address these concerns: the daily huddle.

Like their football-field counterparts, Suburban’s huddles are short team meetings called to enhance the group’s performance.  Held on consistent days and times, driven by a focused agenda, and attended by representatives from many hospital departments, their goal is to improve patient care.

Suburban began its huddles last April after a survey uncovered that “patient satisfaction was not where we wanted it to be,” says Barbara Jacobs, MSN, RN-BC, CCRN, CENP, Chief Nursing Officer. “We wanted to make the patients’ care better. Huddles are a tremendous example of putting the patient at the center of care.”

Led by Jacobs, the huddle is held every weekday at 11:00 a.m. with representatives from maintenance, admitting, environmental services, dietary, pharmacy, medical records, and the lab. Nursing unit directors guide the 15- to 20-minute agenda.

Each morning before the huddle, the nurses spend two hours on rounds, asking patients about their hospital experiences. Then, at the huddle, they thank department leaders when a patient has praised their work and also bring up concerns that need to be quickly addressed.
Take the patient who was unhappy with her phlebotomist’s technique. Following that day’s huddle, a lab super-visor immediately apologized to the patient; later, the lab held a training session to teach staff how to talk to patients about the procedure for drawing blood.

Although Jacobs says it can take up to 18 months to see sustained measurable improvements in patient satisfaction scores, the huddles have already changed the way departments work together.

“It always felt like nursing was being held [solely] responsible for patient satisfaction and quality of care,” says Kim Beddow, MSN, RN, CNML, a medical nurse director. But now, she says, all of the departments are a team with the common goal of improving each patient’s experience.

Make the Commitment. To impact patient care, representatives and leaders
from many hospital departments should attend huddles consistently.

Set a Schedule. It’s easier to prioritize huddles when they are part of a daily
routine, and consistent meetings also help hospitals quickly reach their goals.