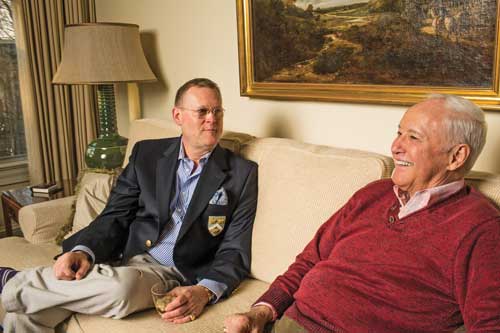 Henry Boyd, RN, is the kind of friend you want to invite to dinner parties.

Just ask Eugene Shiro, who credits his pal with saving his life at his 75th birthday party.

“If it hadn’t been for him and his efforts, I wouldn’t have survived,” Shiro says of Boyd, a nurse at Sibley Memorial Hospital.

Friends and family gathered at the home of Shiro’s daughter in early November to toast his 75th. As the first of three courses was served, Shiro, who has problems swallowing due to radiation therapy for throat cancer many years ago, was happily gabbing and eating rather than concentrating on chewing and swallowing.

“I heard someone say ‘Grandpa, Grandpa,'” Boyd recalls. Shiro was unresponsive and turning blue, Boyd says. He tried the Heimlich maneuver, but after that was unsuccessful, Boyd laid his friend on the floor and sprang into action. While Shiro’s family called 911, Boyd began to administer CPR.

During those moments, the man on the floor was no longer Boyd’s long-time friend, but a patient. Boyd blocked out the hysteria around him, and he didn’t hesitate. His experience as a nurse for 15 years at Sibley Memorial—the last three in the endoscopy unit—as well as many years working for the airlines, prepared him well to respond. It was automatic, he recalls.

Though the actions were natural, the scene was anything but. “When you’re in a hospital, you can call for anything left and right, and there’s everything there to help you,” Boyd says, adding that he was the only partygoer who knew CPR. “But in this situation, it’s just you.”

Boyd administered CPR for about 10 minutes before the paramedics arrived. Even then, Boyd helped, assisting the paramedics in the ambulance after noticing Shiro was in ventricular fibril-lation and needed immediate attention.

Once Shiro arrived at Sibley Memorial Hospital, physicians were able to extract the food lodged in his trachea and stabilize him. Two weeks later, Shiro was home from the hospital, making a nearly full recovery, and crediting his friend with saving him.

“I’m glad he was there. I don’t know what would have happened,” Shiro says of Boyd. The two met about 17 years ago at the University of the District of Columbia where Boyd was attending nursing school. He walked into the wrong classroom, Shiro’s English course, and the two became fast friends.

It’s hard to express his gratitude, Shiro says, “but I’ve been grateful to Henry for many years. Any time I have had any surgery or any episode that causes me to go to the Hospital, he has been right there.”

For his part, Boyd doesn’t feel like a hero: “I just did my job.”