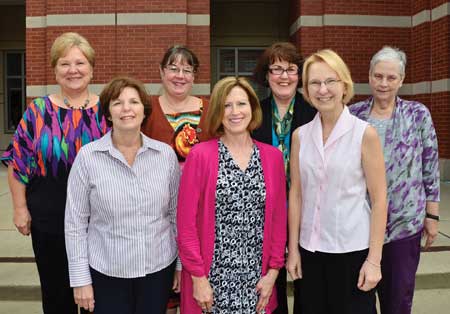 To my classmates of 1947: Sylvia Larsen Chisolm, Corinne Reinert Perkins, and Elsie Peyton Jarvis carried the torch and the honor of representing all of our classmates. We were presented with the meaning of Johns Hopkins University School of Nursing education today, molding old and new technologies in the future of the nursing program at Hopkins. New students arrive with one or more degrees. The new programs prepare them to succeed in nursing practice and education worldwide especially in developing countries. The new values are reflected in colorful children’s art in the Charlotte Bloomberg Children’s Center and in the seasonal gardens of the admissions areas of the Sheik Zayed and Children’s Center buildings. We were privileged to tour these new areas as well as the old hospital buildings and the old tunnel from Hampton House (same scary feeling!). Let’s keep the good spirit and wish the students “full speed” ahead. Thanks, classmates, for the wonderful news and information received by telephone and email. Our sincerest thanks, Elsie Peyton Jarvis.’47

Class Reporter—Betty Borenstein Scher, (443)-449-5934, bbscher@comcast.net. Not much news at the time, but I am sure I can remedy that for next issue. Biggest news is sad news. Although we finally located our “lost” classmate, Mildred (Bunny) Barnard, the good news came with the sadder news that she had recently died up in NY while a resident of a nursing home. We also got the sad news that Mary Agnes (Aggie) Hull Stewart had passed away recently in a nursing home. She had been living on the farm of one of her sons, getting fabulous care and attention from her family, but finally got to a point where she needed constant care. We shall miss both of them, to say the least. Anna Clair Junkin suffered a mild, minor stroke a few months ago, but is recuperating “slowly, but surely.” Her only real complaint is tiring so quickly, which is why she missed Alumni Weekend this year. Ella Ruth Stilz Whitmore also missed Alumni Weekend this year because of a non-physical “emergency” back home in IN; she had to cancel at the last minute. However, she will be visiting Baltimore shortly and so Anna and I will be seeing her then. So I, Betty Borenstein Scher, was our lone participant this year. And I confess that I really had fun seeing members of classes near ours. Let’s cross our fingers about next year. Don David reports that his wife, Ginger Groseclose David, is still doing well for a “senior” but having some sciatic trouble again and probably will get another epidural, which has given her great relief in the past. Well, that’s all, hope to do better next issue!

Reported by Libby Derr: After giving much time and thought to planning for our 60-year reunion, Bette Blome Winyall was ill and unable to attend the Homecoming events. Just five of us had registered. Jan Bankert Wagner, her husband Don, and Wilma Kays Shapiro enjoyed Friday evening dinner at Mo’s Seafood Factory, reminiscing and reviewing Bette’s scrapbook and questionnaires from classmates. On Saturday, Wilma and Libby Derr enjoyed hearing Dean Hill’s report on the school, gathering with alumni from other classes and hearing reports at the annual meeting. Only Libby was able to attend the alumni luncheon, which she enjoyed, sharing a table with other jubilarians and seeing the 50-year graduates honored.

Reported by Carolyn Pope Boitnott: Eight members—Kathleen Aldrich-Ames Kauffroath, Betty Bordeaux Srsic, Peg O’Connor Oliverio, Carolyn Pope Boitnott, Betty Jo Chicken Sestak, Joanne Sides Watson, Marge Heinbockel Groppe, Betty Wade Maalouf—of the class of 1957 were back to celebrate their 55-year reunion. As always, the best part of getting together is remembering events and people from our days in school. Everyone was impressed by the new hospital buildings but also glad to see a few things had not changed: The Dome, Hurd Hall, and the Phipps building. We also enjoyed talking to current nursing students and feeling that our school was in good hands.

Barbara Thomas Yinger received the Excellence in Service to Hood College Award for 2012 on June 9 at Hood College in Frederick, MD, from President Ron Volpe. This award is given annually at the Alumni Luncheon to recognize extraordinary contributions made by an alum to Hood College.

Reported by Betty Borenstein Scher ’50: From a letter to another alumna comes this news from Isabel Josepher Rosenbaum: “I now live in Los Angeles, having made the move from NY in 1969, after my husband, Charles, came home from Vietnam. He was an internist and oncologist and was there for a year. He was in practice here for more than 35 years, has retired from full-time practice, but is an attending physician at Olive View Hospital in the Hematology/Oncology Clinic…Our two children live in CA. Our daughter…lives nearby with our 10-year-old granddaughter; and our son …lives in northern CA with our 8-year-old twin grandsons. Life is full and lovely. I worked in NY before moving here, at various places, but usually on medical wards…In CA, I worked at the LA County Museum of Natural History as coordinator of their volunteer program for 15 years. Quite a stretch from nursing, but it was very exciting.”

Reported by Sue Klein Wright: The reunion started Thursday afternoon in the hotel lobby and went strong through dinner Saturday evening. To say we had a good time is an incredible understatement. Forty-eight members of the class of 1962 celebrated their jubilee and 53 years of friendship, support and personal growth.

Reported by Deb Baker: A small group attended the Alumni Weekend events. I enjoyed catching up with Lisa Wolf and Anne Biles at the cocktail party. Lisa and I both continue to work at Johns Hopkins Hospital after pursuing advanced degrees and Anne is loving her work in the Emergency Department at Holy Cross Hospital in Silver Spring, MD. Tina Czopek and Karyn Ritchie Brundage attended the Dean’s Coffee and the reunion luncheon. Tina is working at Inova Fairfax in Informatics and Karyn is a pediatric NP in Hematology Oncology in Seattle. We are looking forward to seeing more of our classmates at future reunions

Class Reporter—Sarah Gauger, (919) 321-8849, sgauger@me.com. Helen Yee Borte continues to work on Weinberg 5B and won the Clinical Excellence Award this year. Her husband Robert graduated from University of MD Nursing School, so now there are two nurses in the family. They are expecting their second child, a boy, in December. Jeff McFarlane and his wife are happy to announce the birth of their first baby, Liliana Faith in September. He is now a certified Otorhinolaryngology nurse (CORLN). Marian Grant was elected to the board of the national Hospice and Palliative Nurses Association (2013-2016). Jen Ellison Marger is taking a break from nursing to focus on being a stay-at-home mom to her son Jacob. I, Sarah Gauger, took a fabulous fall vacation hiking in the mountains of Peru…I highly recommend it!

Neysa Ernst is currently president of The Maryland Nurses Association.

Hani Katz is now married and her new last name is Gutierrez. She is currently working in CA as a Peds NP in Pediatric GI. She and her husband are expecting an addition to their family.

This summer, Donna LoSasso, assistant professor at Baylor University Louise Herrington School of Nursing, was elected a national council member for the National Association of Neonatal Nurse Practitioners. She started her two-year position in October.