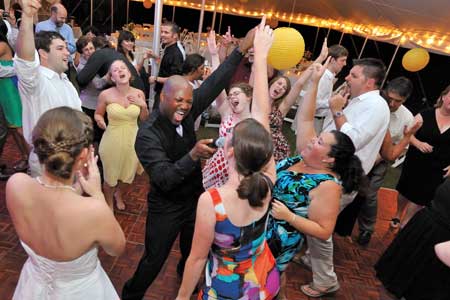 Sometimes, Kevin Witcher sings to his patients. It’s not something you’d expect to hear amidst the intercoms and equipment noises in Hopkins’ Adult Emergency Department, but Witcher, an RN, considers it part of his caregiving skill set. “I see a lot of geriatric patients, and sometimes they pass while they’re here,” he says. “I’ve sung for their families to offer comfort, and family members have told me that it was a really special moment for them.”

It’s been a decade since Witcher’s former life as a full-time music and dance man, but his thriving career spanned 12 years and had him singing and dancing all over the country. The years of travel, however, came with a cost. “When I retired from performing, it was because I wanted to settle down, put down roots, build some relationships,” he says, adding, “That’s hard when you’re on the road.”

It was time for a major change. Inspired by friends and family in the nursing profession, he decided to go to nursing school, and found a new love. Performing still called to him, though, so in addition to some part-time choreography and show choir coaching, he took up a side career as a lead singer for a party band. During the week, he nurses. On weekends, he belts Motown and top 40 hits—power ballads are his favorite, he says—at weddings, bar mitzvahs, and corporate events. “When I first went into nursing, people thought it seemed like such a drastic change, but it’s not actually that different. You have to be ‘on’ all the time, and you make people feel good. There’s a lot of crossover,” he says. “And holding on to my performance opportunities while nursing keeps me grounded and happy.”