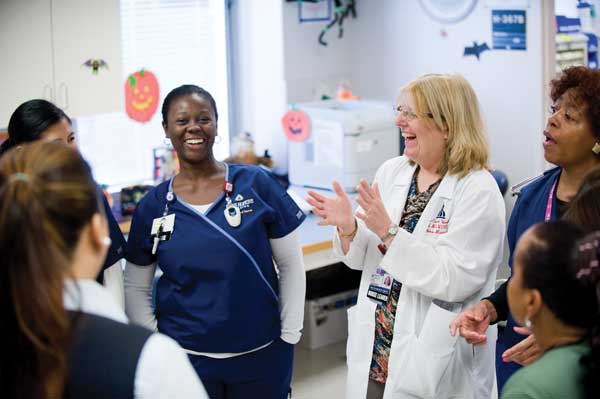 For a nurse intent on lifelong learning, any space will do: a quiet cafeteria corner, a nook off the ICU during a break, or, in Sue Verrillo’s case, her grown son’s old bedroom. Years ago, a little boy in t-shirts and shin-length basketball shorts spent many an hour laboring over homework in this room; now, that bunk bed is long gone (along with the humongous Transformers poster), but the studying goes on, this time on mom’s part. 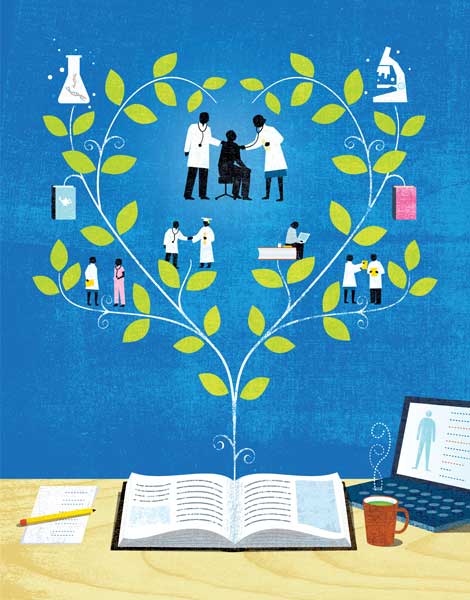 Just off her day shift in The Johns Hopkins Hospital’s physical rehab unit, Verrillo, MSN, RN, sipped a hot cup of ever-present tea as she settled into what, for her, was the modern equivalent of night school: sweats, wooly socks, and a computer. On the screen of her Dell popped up her latest lesson, an hour-long module in Evidence-Based Practice. It’s part of a 10-hour online course developed by Johns Hopkins nursing staff and faculty that gives Verrillo much more than a certificate to hang on the wall.

Education had been her gateway to a world that, quite frankly, her blue-collar Baltimore family initially thought was far beyond her reach. No one in her clan had graduated from college. As for being a nurse, that was her mother Alice’s dream, crushed when Alice’s mom (Verillo’s Grandma Nellie) died while Alice was but a teenager. Yet Sue had resurrected her mom’s most fervent desire, nurtured it, parlayed a bachelor’s into a coveted Nurse Clinical III position, but didn’t stop there. She accomplished a master’s degree and was now taking the next step: increasing her professional value by becoming an expert in an emerging field. Education had given Sue Verrillo an identity; what she thirsted for now was the knowledge and the opportunity to make a difference.

On the screen the lesson played and a nurse learned; she wouldn’t have to wait long for the payoff.

Last year, the Institute of Medicine made quite clear its position on the value of nursing education, in any form. In its report, The Future of Nursing, issued jointly with The Robert Wood Johnson Foundation, it listed eight recommendations for moving the field forward.

Recommendation 6 left little to the imagination: Ensure that Nurses Engage in Lifelong Learning.

The IOM’s blue-ribbon panel suggested that everyone involved in nursing education, from accrediting bodies to continuing ed programs on down, unite to create an atmosphere where lifelong learning helps “gain the competencies needed to provide care for diverse populations across the lifespan.”

In a sense, all nurses are lifelong learners. Technology is moving too fast to think otherwise, with in-service meetings to discuss new devices, drugs, and procedures as common as deliveries of fresh scrubs. “If a new piece of equipment comes into your area today you have to learn it, you have no choice,” says Karen Ritchey, MSN, RN, CNOR, an OR Nurse Manager at The Johns Hopkins Hospital. “If you don’t, there could be patient harm, and there’s ramifications for that.”

So for the sake of argument, let’s classify lifelong learners as the Sue Verillos of the world, individuals motivated to go beyond in-service seminars and mandatory orientation to a place of personal and professional gain.

Who and what drives these modern lifelong learners? Often it’s the end-user, the patients and their families. No longer quiescent, they now demand answers from the nurses who provide their care. Saying ‘I don’t know,’ well, “It doesn’t fly,” sniffs Michele Galioto, MSN, RN, director of education for the Oncology Nursing Society. “The consumer’s expectation and their knowledge forces [nurses] to go beyond just competency in order to be able to have an open, informed consent, educational discussion with them. It’s not unusual for any patient…to come in knowing full well that ‘this is what’s wrong with me, this is what my physiology is doing, and, from what I understand, these are my treatment options.’ Folks challenge their physicians and nurses.”

So do the institutions nurses belong to. Hospitals seeking Magnet status often push—and not always in a subtle manner—for their nurses to go back for at least a bachelor’s degree, and the pressure has only increased since The Future of Nursing recommended that 80 percent of all nurses have a bachelor’s degree by 2020. Similarly, achieving certification is an expectation on many units, notably at academic medical centers. Education and certification costs are even covered by the institution…sometimes. Sue Verrillo is one of the lucky ones; she might never have gotten a master’s if Hopkins hadn’t picked up most of the tab. “About 50 percent of employers pay for certification,” notes Cyndi Miller Murphy, MSN, RN, CAE, Executive Director of the Oncology Nursing Certification Corporation. “But only 38 percent pay for recertification (required every four years), which makes no sense for those who intend to support lifelong learning.”

Especially when you consider the last driver behind lifelong learning: retention. It’s no secret that nurses burn out at a high rate and high cost to institutions. Encouraging education to promote inter-institutional job shifts—especially in an aging nursing workforce—could be an extremely reasonable insurance policy. “Lifelong learning is an important strategy in re-tooling a workforce and keeping people excited about work, keeping them vital. When you lose vitality in a work force, you have high turnover,” says Cedar-Sinai’s Linda Burnes Bolton, DrPH, RN, FAAN, who was Vice-Chair of the IOM’s report. “It’s ‘pay me now’ or ‘pay me later.’ The average cost of turnover three years ago in an acute care hospital was $66,000 (per nurse). The average cost they allot for continuing education is $5,000. There’s no comparison.”

But catering to lifelong learners also means ensuring the money is well spent, which isn’t necessarily a given: in a 2009 IOM report, continuing education (CE) in health professions including nursing was severely criticized. Notably, the IOM found that “there are major flaws in the way CE is conducted, financed, regulated, and evaluated.” In other words, simply taking a course was no guarantee of increasing competency.

The IOM’s reports are sending shivers up and down CE’s spine. The body that credentials organizations providing nursing CE programs is doing its part to beef up standards by using evidence-based criteria. Kathy Chappell, MSN, RN, Director of the American Nurses Credentialing Center’s Accreditation Program, states, “We’re asking organizations to demonstrate the link between continuing nursing education they offer and improvement in the professional practice of nursing and patient care as opposed to [just] evaluating how satisfied the learners are at the end of the activity,” says Chappell. “I am less concerned about whether nurses like a CE program; I want to know it’s made a difference in how they practice.”

As a mandate that sounds good, but in reality the lifelong learner interested in quality CE will, in the near term, have to rely more on a program’s reputation than any outcomes research. That’s because such research is just maturing and it can be difficult to conduct scientifically. It’s far easier to measure a change in prescribing practices—which was studied and quantified in physicians attending medical CE courses—than to answer the more subjective question of whether a well-studied nurse individually gives superior care.

On a large scale that may be true—a research link between achieving a bachelor’s degree in nursing and providing patient care has been established, and data on Advanced Practice Registered Nurses strongly suggests they provide superior care perhaps on par with physicians—but whether someone getting shorter forms of CE becomes a better nurse has yet to be concretely established. Hopkins’ Pamela Jeffries, PhD, RN, ANEF, FAAN, who is launching a new Professional Programs unit devoted to increasing educational opportunities for nurses and other health professionals intent on improving their academic and career potential, says measuring the effectiveness of their programs will be a priority. “We have to have a solid evaluation strategy and plan in place, in addition to tracking outcomes and the impact of educational programs,” says Jeffries, who serves as the School of Nursing Dean for Academic Affairs.

The sense among CE professionals is that those education/performance links will eventually be made, especially as two other IOM CE suggestions take hold. They include building strong inter-professional educational programs that pair nurses with other providers, and creating stronger bonds between CE and healthcare organizations.

An example of the latter is Michigan State University’s Online RN Refresher Program, aimed at nurses long separated from the field. That program’s strength, says Katie Kessler, MSN, RN, Director of Professional Partnerships, is MSU’s joining forces with hospitals in the learner’s community, no matter how distant. “It’s interesting to me that nurses, even if they had been a nurse for 20 years, when they inquire about getting back into nursing they all feel confident they can do the theory part, and almost none are very confident about the clinical part,” says Kessler. “I think one of the successes of our model is we help them arrange a clinical practicum in their home community with an RN preceptor in a hospital or an agency. That has been the thing that really gives them the confidence to move forward.” Kessler adds that because of rapid changes in healthcare technology, many nursing agencies recommend that nurses take refresher courses even if they’ve been out of the field for just five years.

Charged Up With CE

For Sue Verrillo, her Evidence-Based Practice course led to the kind of team-oriented result that can charge up a lifelong learner for years. Working with colleagues at the Wilmer Eye Institute at Johns Hopkins, she used her newfound knowledge like a detective, tracking down a mysterious ailment that was causing severe vision damage in select cataract patients. A painstaking analysis found the culprit: detergent enzymes that were binding with sticky eye proteins in the tiny nooks of instruments, and which survived the sterilization process. Verillo watched as researchers and physicians brought her theory to life, verified it, and wiped out the problem.

“It was amazing. I let the Wilmer team run with it, they went to a national conference and presented it there,” says Verrillo. “It was like being a coach and seeing your team win the championship. I was like, ‘They did it!’ That just fueled my soul!!”

And now, with a promotion to nurse manager and a few more courses under her belt, Verrillo is doing what many lifelong learners do: encouraging others to follow her lead. She has an endowed fund that pays for those who take—and pass—a course she teaches for a certification exam. “I’m known in the hospital for accommodating nurses who want to go back to school. I encourage my nurses to challenge themselves and to learn at least one or two new things a year.”

Because one never knows where the spark for lifelong learning will come from.

Be a lifelong learner and visit http://vimeo.com/jhunursing 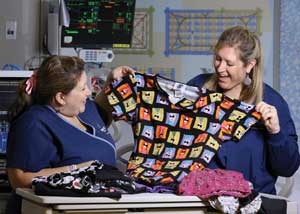 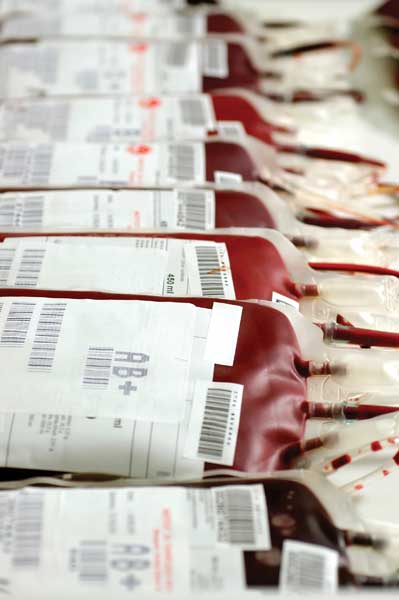 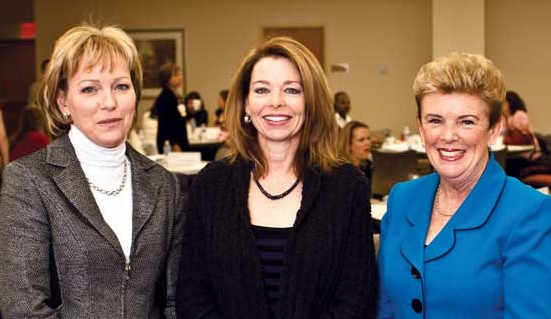