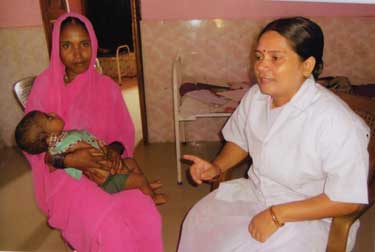 by Atul Mittal and Indrani Kashyap

The mother of four children, a pregnant Anita Devi arrived at the primary health center near her village for one of her antenatal visits. Nurse-midwife Rati Rani made the 35-year-old mother comfortable and, as part of the visit, talked with Mrs. Devi about her family and the risks of having children too close together. This child would be Mrs. Devi’s fifth in nine years of marriage; three of her children were born within a year of each other.

“My mother-in-law was against any form of contraception,” Mrs. Devi explained when asked about her previous births. “Though my second child was a son, she said that I should try for more sons. But my next children were girls. I was tired and felt I had nothing left in my body.”

Rani had heard such explanations before. In Bihar province, families have on average 3.7 children, and only 32.4 percent of women use any family planning method.

Rani and hundreds of other nurse-midwives across India are at the forefront of a targeted effort by the government of India to save lives by reinvigorating postpartum family planning (PPFP) services. With the support and technical expertise of Jhpiego and partners, India’s nurse-midwives are educating and counseling women about their family planning options during antenatal visits and introducing them to the intrauterine contraceptive device (IUCD). This long-acting method lasts for 10 years and can be inserted within 48 hours after giving birth. As part of its lifesaving work in India, Jhpiego is helping to reinvigorate vital family planning services in 16 states and assist the Indian Nursing Council in strengthening the education of nursing and midwifery students.

Mrs. Devi and her husband chose to have an IUCD inserted after she gave birth to her fifth child, a girl. “Every time I feel doubtful, I come to Rani,” she said. “She explains it all beautifully to me and now I am confident that I have done the right thing.”

Rani, 35, says the government initiative is having an impact in the 42 villages served by the Teghra Primary Health Center. Since January of this year, 241 women have been provided postpartum IUCD services, 186 of them by Rani.

She has seen firsthand the challenges women and their families face when burdened with too many children, often struggling to provide them with food and clothing. “The mother suffers in silence,” says Rani, who was trained by Jhpiego under the PPFP initiative supported by the Bill and Melinda Gates Foundation. “Only if we have smaller families will we be able to have healthier families where the children will get better nutrition and opportunities to educate themselves. Only then can we ultimately have a better and healthier society.”