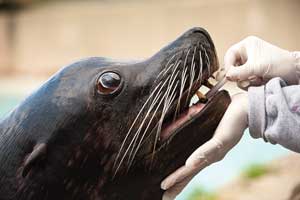 What would compel someone to reach inside the gaping mouth of a 500-pound sea lion? To collect spit, of course.

For Douglas Granger, PhD, no mouth is off limits, and the salivary bioscience researcher has extended his interests beyond human spit to that of the animal kingdom. Through collaboration with the Pittsburgh Zoo, Granger and colleagues are sampling sea lion saliva for biological clues that could help shape future animal interventions.

Sampling saliva is a minimally invasive way to evaluate how individuals—in this case, animals—are influenced by environmental change and how that might relate to their health and behavior. “Advancing our understanding of these relationships may allow us to better serve the needs of endangered species in captivity,” says Granger, director of the Johns Hopkins University School of Nursing Center for Interdisciplinary Salivary Bioscience Research.

A leading expert in the discovery, measurement, and application of ana-lytes in saliva, Granger is more accustomed to working with human subjects. His research has delved into the specifics of spit for determining health risks, such as heart disease, and biological responses to stress.

But perhaps when it comes to spit, humans and animals are very much alike. Can sea lion, giraffe and orangutan spit have the same biological elements detected in human saliva that unlock information about stress and anxiety? What else can researchers measure from animal spit? Could this research also pave the way to explore the neuroscience of human-animal interactions?

Take Granger’s first subject, Hawk the 500-pound sea lion who was facing an unsettling environment change. The female sea lions were scheduled to be moved, a relocation which could affect Hawk’s behavior—and, by extension, his biology. Could Hawk’s spit spell out signals of stress? With the help of animal trainers well versed in coaxing a large animal to open wide for a spit swab, Granger collected saliva samples for analysis.

The unlikely partnership between the Zoo personnel and salivary researchers began when someone from the Pittsburgh Zoo attended one of Granger’s “spit camps,” a workshop held at the Center for Interdisciplinary Salivary Bioscience Research for researchers interested in learning more about collecting and analyzing saliva samples. Saliva sampling can give zookeepers and curators a noninvasive tool to measure animals’ biological processes underlying health and behavior, Granger says.